Self Catering in Cumbria - Broughton-in-Furness 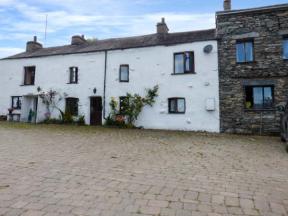 Sleeps a maximum of: 8

This semi-detached cottage is located close to the village of Broughton-in-Furness and can sleep eight people in four bedrooms.

Moss Side Farm Cottage is a semi-detached cottage close to the village of Broughton-in-Furness and just 7.5miles from Coniston. The cottage sleeps eight people and has three double bedrooms, one twin room and two ground floor bathrooms.

Also in the cottage are a kitchen with a dining area and a sitting room with a woodburning stove. Outside is ample off road parking and a lawned garden with hot tub and furniture. Situated in the south western corner of the Lake District, Moss Side Farm Cottage is a lovely family holiday cottage all year round.

The owners were extremely helpful and friendly both on the phone whilst arranging key collection and during our stay. The views of the countryside are stunning and the cottage was ample large enough for our party. My grandchildren loved the fact that they could watch the tractor, chickens and ducks from the window when it was a little too cold and wet to play outside.
Mrs Mcdonald
2016-04-04

Details
Oil central heating with woodburning stove
Range cooker with electric oven and hob, microwave, fridge/freezer, washer/dryer and dishwasher
TV with Freeview, DVD, WiFi, selection of books, games and DVDs
Fuel, power and starter pack for stove inc in rent
Bed linen and towels inc in rent
Travel cot, highchair and stairgate
Ample off road parking
Private, enclosed, lawned garden with hot tub and furniture
Two well-behaved dogs welcome
Sorry, no smoking
Shop 2 miles, pub less than 3 miles
Note: Due to the nature of hot tubs, the allowed age for hot tub usage is ages 16 and over and below this would be advised by the owner's discretion
Note: There is a second staircase to access the ground floor bathroom with Jacuzzi bath and the twin bedroom is accessed via this room
Note: There's a campsite within the farm grounds
It can't be seen from the property

Get an Ordnance Survey map covering the Broughton-in-Furness area.