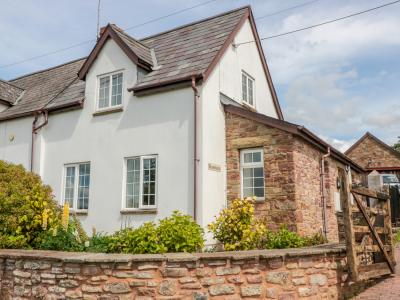 This end-terrace cottage rests on the outskirts of the town of Lydney and sleeps up to four people in two bedrooms.

Rodley Manor Retreat is an end-terrace property resting on the outskirts of Lydney. It houses two bedrooms, comprising a king sizr double and a double sleeping up to four people. The bedrooms are serviced by a bathroom with a bath, hand-held shower, basin and WC.

Completing the interior is a kitchen, a dining room and a sitting room. Rodley Manor Retreat is wonderful base for a relaxing break to this part of Gloucestershire.

Details
Gas central heating
Washing machine, dishwasher, electric oven and hob, under counter fridge with ice box
TV with free view and HDMI cable, WiFi
Bed linen and towels inc in rent
Guests will need to bring their own pillows and pillowcases
Fuel and power inc in rent
Rear patio garden with table and chairs
Ample off-road shared parking space for 2 cars
Sorry, no pets or smoking allowed
Pub and shop less then 2 miles
Note: This property only accepts children over the age of 16
Please note, you will need to bring your own pillows and pillow cases - all linen is still provided

Get an Ordnance Survey map covering the Lydney area.