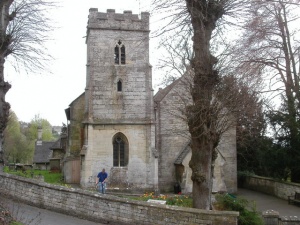 Randwick shelters beneath the western crest of the Cotswold Escarpment. Short walks to the top of the ridge are rewarded with fine views westward to Wales and north to Shropshire. The village is a pleasing jumble of cottages linked by winding lanes (called laggers by the locals). A traditional festival called the Randwick Wap takes place every May.

The festival dates at least as far as back the Middle Ages, though it incorporates earlier pagan elements. It starts with a procession of villagers in colourful costumes preceded by a Mop Man, who sweeps his wet mop before him as he walks.

Completing the procession are a Flag Man, Sword-bearer, Cheese-bearers, Ladies-in-Waiting, Princesses, a Queen, and the Mayor.

The Mayor is dunked in the Mayor's Pool, and the procession carries on to the Well Leaze, where two rounds of cheese are rolled down the slope. These traditional events are followed by a day-long festival of music and public events, with a collection of stalls selling local produce and crafts.

The festival was banned in the late 19th century after it gained a reputation for excessively rowdy behaviour, but it was reintroduced successfully in 1972.

More self catering near Randwick

More bed and breakfasts near Randwick