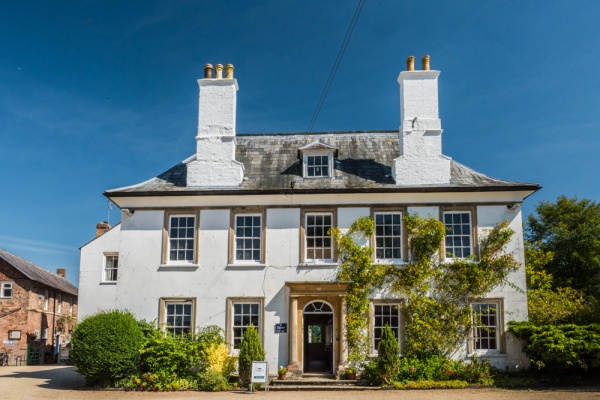 In the heart of the historic village of Berkeley, Gloucestershire, tucked between the churchyard and Berkeley Castle, stands The Chantry, a grade II* listed 18th-century house that was once the home of Dr Edward Jenner, the man who popularised vaccination for smallpox. 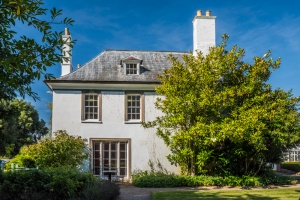 The garden frontage of The Chantry

The name 'The Chantry' comes from the fact that the house stands on the site of an 8th century Saxon minster church and community of monks. Archaeologists from the University of Bristol have excavated the site and discovered remains of the monastic community. Under the minster they also found an intact skeleton dating to around the time of the Roman invasion of Britain in the 1st century AD.

The Chantry was built in the early 18th century, and was owned by the Weston family in 1785 when Edward Jenner purchased the property.

Jenner was a native of Berkeley, the 8th of 9 children born to the vicar of St Mary's church, Reverend Stephen Jenner. He was apprenticed to a surgeon at the age of 14 and studied in London with the prominent surgeon John Hunter.

After his studies were complete Jenner returned to Berkeley and established a practice as a physician. He remained in close contact with Hunter throughout his life, and Hunter even proposed him for membership in the elite Royal Society for his work in the field of natural history.

Jenner published numerous studies in natural history, including a study of the nested cuckoo that resulted in his acceptance into the Royal Society in 1788. He was also an avid balloonist, and is thought to have met his future wife, Catherine Kingscote, when his trial balloon landed in Kingscote Park, owned by Catherine's father. 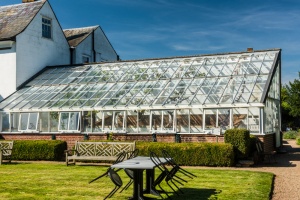 Jenner is best known for his work in immunology, especially his development of vaccination for smallpox. It is hard to overstate just how serious smallpox was in Jenner's time. There simply was no more deadly or frightening disease known, and there was no reliable treatment. Inoculation against smallpox was known and practised, but it was expensive and unreliable.

In 1768 an English physician named John Frewster realised that people who contracted cowpox did not catch smallpox. Cowpox, as the name suggests, affects cattle. Humans can catch it, especially those who come into close contact with cows, can catch the disease, but it is relatively harmless. Several physicians experiments with intentionally giving human subjects a dose of cowpox to see if it rendered them immune to the more deadly smallpox.

The most famous trial was by a Dorset farmer named Benjamin Jesty, who successfully treated his own family with a cowpox vaccine during an outbreak of smallpox in 1774. For more on Jesty see our article on St Nicholas of Myra Church in Worth Matravers, Dorset, where he is buried.

It seems likely that Jenner was aware of Jesty's success. Jenner hypothesised that the pus in cowpox blisters protected milkmaids from getting smallpox. In 1794 he put his theory to the test.

In May 1796 Jenner vaccinated James Phipps, the son of his gardener, a young boy of 8. He scraped pus from cowpox blisters on the hand of a milkmaid named Sarah Nelmes and infected Phipps with the liquid. The boy received a fever and felt uncomfortable, but soon recovered. Jenner then inoculated him with 'variolous material'; powdered smallpox scab. Phipps exhibited no signs of smallpox. Jenner then gave him several other forms of smallpox material, but no infection followed. 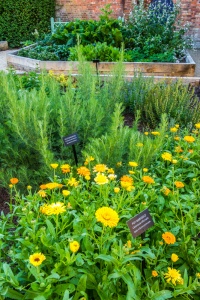 Not everyone was thrilled with the success of vaccination, however. Established medical doctors, especially the elite of London medical practitioners, scoffed at the vaccination process, the fact that it involved giving people a dose of cowpox, and that the idea had come from a mere country doctor. Jenner was ridiculed, and there were even cartoons showing vaccinated people turning into cows.

It was not long, however, before the scoffs to turned to acceptance, as the Jenner's theories were proven correct. One thing made Jenner quite unique among his contemporaries; he did not try to profit from his ideas. He considered that it would be immoral to make money from vaccination, and was firmly convinced that the only honourable thing to do was to make the treatment freely available to all.

It is fair to say that Dr Jenner never made a penny directly from the success of his experiments with vaccination. He did, however, receive two grants of money from Parliament as a way of thanks. Given the number of lives vaccination probably saved, it seems a paltry reward.

Jenner lived at The Chantry until his death in 1823. In 1876 it was sold to the Church of England, who used it as the vicarage. It was purchased by the Edward Jenner Society in 1985 to house the Edward Jenner Museum, dedicated to the science of immunology and to Jenner's life and work.

Though the house is very much an 18th-century building and of interest in its own right, the interior of the house is given over largely to the museum on Dr Jenner's life and the concept of vaccination. There is a fascinating display on the history of immunology as applied to different diseases, from the flu to HIV, smallpox to diphtheria.

The most interesting part of the museum focusses on Dr Jenner's life, with personal objects, and the famous medical drawing he made for his published works on the vaccination process. In one corner of the house, almost tucked away under the staircase, is Jenner's study, very much as it was when he died in 1823. 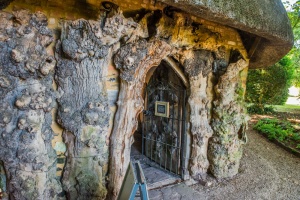 The 'Temple of Vaccinia'

The attic of The Chantry is open to visitors by guided tour, though a small charge applies. Our family opted to take the tour, and it was fascinating. We got to see how the servants lived, up under the roof, in small, cramped rooms.

During the war, these rooms were used by soldiers (though no one seems sure which soldiers were stationed here) and they left behind some amusing graffiti. There are a few exposed sections of original Georgian wall paper, and a fascinating system for collecting rainwater by an internal system of a tank and pipes running through the walls.

The Temple of Vaccinia

Beside the house is a large garden space ringed by trees, with borders against high stone walls, and the 18th-century tower of St Mary's church peering over one wall. The tower is now covered in ivy planted by Dr Jenner. In one corner of the garden, half hidden by trees and butting up against the churchyard wall, is a curious thatched hut in rustic style, built with oddly shaped timbers.

The hut was designed for Dr Jenner by his friend, the clergyman Robert Ferryman. Dr Jenner called the hut 'The Temple of Vaccinia' and here he offered free vaccinations to the poor of Berkeley and the surrounding area. When news spread that Dr Jenner's vaccine offered hope against the scourge of smallpox the queues of people waiting to be treated often stretched into the town.

Two of Jenner's cuttings are still living, along with cuttings from his original stock. Together they practically fill the entire vinery structure. The vinery is a fascinating structure, with brick and stone walls to gather heat from the sun, and a fire-driven boiler in the rear for cold winter months. 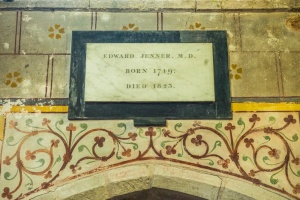 In front of the vinery is a physic garden, filled with medicinal plants known to have been used during Jenner's lifetime. There is no indication that Jenner maintained a physic garden during his time at The Chantry but he was fascinated with horticulture.

The garden is divided into four parts, each one planted with herbs traditionally used for different complaints. One section has plants used to treat digestion, another is home to plants used to treat coughs and colds, while the remaining sections deal with headaches and wounds.

The Legend of the Berkeley Toad

At one end of the garden is a large well, capped by an iron grate. According to a local legend gathered by John Smyth, steward to the Berkeley family of Berkeley Castle, a flesh-eating toad lived in the village, but his accounts to not specify in which well. The tale is recorded thus:

"A Toad, in the time of Kinge Henry the seventh, of an incredible bignes (sic), which, in the deepe dry dust in the bottom thereof, had doubtlesse lived there divers hundreds of years ... which in bredth was more than a foot, neere 16 inches, and in length more. Of which monstrous and outgrowne beast the inhabitants of this towne, and in the neighbouring villages round about, fable many strange and incredible wonders."

The house and Berkeley Castle are both well signposted off the A38. There is a large car park outside the castle, but you can also park directly in front of the house by following the signs down Berkeley High Street. The house is immediately beside both the castle and the church. 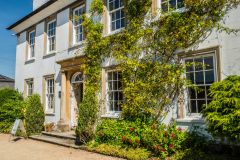 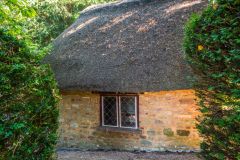 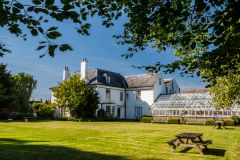 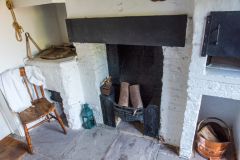 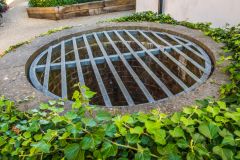