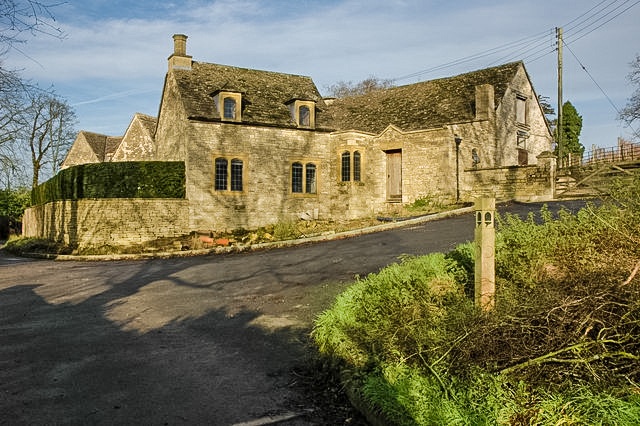 The Cotswold Way runs right through this attractive hamlet just south east of Wootton-under-Edge. There are a number of attractive historic buildings in the town, notably the parish church of St Kenelm. The church tower dates to the 15th century, but a major rebuilding project in the early 19th century has left little else of historic note. Above the village on Winner Hill is a restored tower folly.

The parish church is dedicated to St Kenelm, a popular Gloucestershire saint. Kenelm (or Cynehelm) was an 8th-century king, member of the Mercian royal family. He was murdered by a relative, but according to legend a spring burst forth where he was buried, and the water gave healing properties.

He was carried by monks to Winchcombe, where his shrine was a popular place of pilgrimage throughout the medieval period. If there is such a thing as a local Cotswold saint, Kenelm is it. The oldest part of St Kenelm's church is the 14th-century tower, but the rest of the building was rebuilt in the Victorian period.

The village was recorded in the Domesday Book of 1086. Its name comes from the Old English words for a woodland clearing where alders grow. The village name has changed considerably over the centuries. William the Conqueror's recording clerks wrote it as Alrelie. A document from 1309 calls it Alreleye, and by 1345 it had been altered to Alrely.

Like so many other places in the Cotswolds, Alderley was a centre of the wool trade in the medieval period and beyond. By the 17th century, there were several woollen mills in the village.

Near the church is Alderley House, a 19th-century manor house in Elizabethan style. The house stands on the site of a Jacobean manor built by the barrister, lawyer, and judge Sir Matthew Hale from 1656.

Hale is best known for his treatise Historia Placitorum Coronae, or The History of the Pleas of the Crown. In an age when corruption was common, Hale was also known for his honesty and willingness to make politically incorrect decisions if they upheld the law. The house served as a school after WWII but is now a private dwelling.

Another historic building is Alderley Grange, built about 1760. An earlier house on the same site was the birthplace of Sir Matthew Hale (mentioned above).

More self catering near Alderley

More bed and breakfasts near Alderley