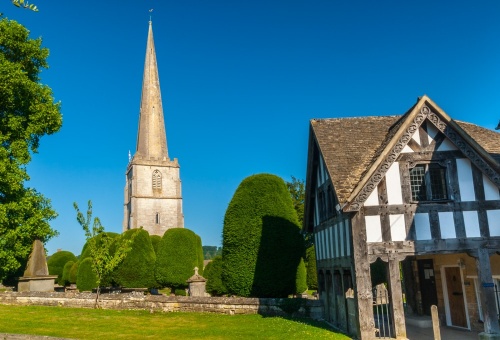 Painswick is a picturesque Cotswold town with a striking church. The churchyard is bestrewn with carefully clipped yew trees. Legend has it that if you attempt to count the trees, you will always arrive at a different total!

The Town of Painswick

Sometimes called, "The Queen of the Cotswolds," the picture-perfect town of Painswick owes much to sheep. It was one of the most prosperous of the Cotswold wool towns during the medieval period, and it was this prosperity that gave it many of the outstanding variety of period buildings to be seen today. Most of these buildings are built of mellow Cotswold stone from the quarry at Painswick Beacon, which looms above the town.

The streets of Painswick meander here and there as if they have no particular place to go. Yet a modern visitor will find no shortage of places worth a stop.

One such is the Post Office on New Street, which is housed in the only exposed half-timbered building in the town. This is reputedly the oldest building in England to hold a post office. New Street itself was built in 1428, at the height of the prosperity induced by the medieval wool trade. 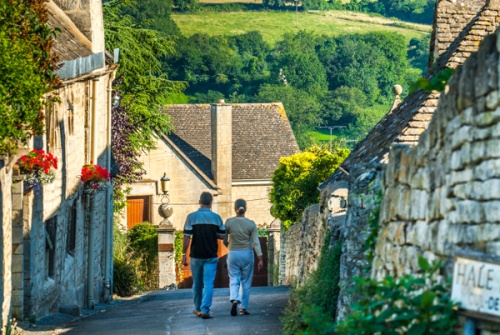 Further along the street is the Falcon Hotel, which boasts the oldest bowling green in the country. These greens were once a common feature of inns and pubs.

On Bisley Street are houses from the 14th century which still show two so-called Donkey Doors. These doors may seem extraordinarily wide by today's standards, but there is a reason for this width; they were built to allow a donkey laden with panniers of wool to pass through.

The parish church of St. Mary's is worth more than a casual visit. The church dates to the early Norman period, though much of what we can see today was added in the 15th century. The west tower is striking in its Saxon-like simplicity.

Look closely at the tower and you'll see the scars of cannonballs left by a bombardment during the Civil War. At that time Parliamentary troops took refuge in the church, but they were forced out by a combination of cannon fire and burning brands wielded by Royalist soldiers.

These soldiers were said to have gathered at the shop across from St. Mary's, where they lit their torches before storming the church. That shop is, appropriately, called, "The Fiery Beacon Gallery."

Enter the churchyard through the half-timbered lych-gate. Lych-gates are a roofed entry to the churchyard. Here the procession bearing a corpse would wait, under cover, for the priest to begin the burial ceremony.

Though there is no doubting the age of the materials used to build this lych-gate, the actual structure was erected around 1901, using timbers salvaged from the belfry. The timbers are suitably decorated with bells. In the entry is an unusual set of iron stocks, called spectacle stocks. 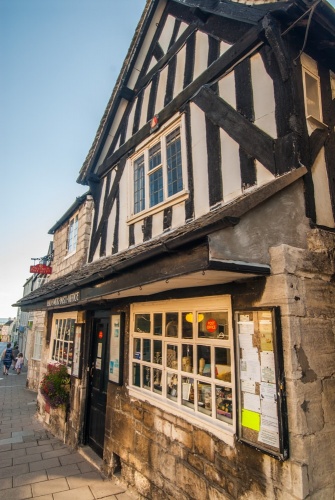 The graveyard about the church is crammed with pedestal tombs of rich wool merchants, but it is the abundance of yew trees that draw the most attention. There are two legends surrounding the yews. One legend says that the trees are uncountable, the other, that there are 99 trees, and if a hundredth was to be planted, the devil would shrivel it.

St. Mary's is also well known for its annual "Clypping ceremony." You might justifiably surmise that this September ceremony had to do with trimming the yew trees, but you'd be wrong. The ceremony involves the children of the parish embracing the church, singing hymns, and carrying nosegays of flowers. Photos the church can be seen in our Painswick Photo Gallery.

Above the town is Painswick Beacon, 250 acres of common land, which offers some excellent views across the Severn Valley. On the top of the beacon, the outlines of a large Iron Age hill fort can be seen.

The fort covers 7 acres and is triangular in shape. Double banks and ditches on three sides provided defences to the fort, while the steep slope on the north-east side meant that a single ditch sufficed there. In the centre of the fort is a deep circular depression. It was first thought that this was a well, but it seems more likely to have been made for some ritual purposes.

Two long-distance paths, the Cotswold Way and the Wysis Way, meet at the fort. Unfortunately, a small golf-course also uses the Beacon.

On the outskirts of the village is the local manor, Painswick House. Surrounding the manor are 6 acres of formal and informal gardens known as Painswick Rococo Gardens. The garden, which may more properly be called a "pleasure ground," is a rare survivor of the very brief rococo period in English garden design. 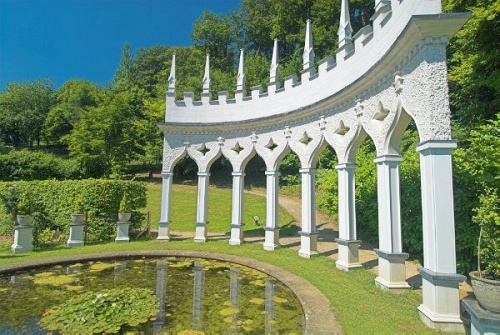 A few minutes walking about Painswick gives you the impression that the town is a twisting shambles of narrow streets and lanes, jumbled together willy-nilly on the side of a steep hill. In this case, impressions are not deceiving! You'll think you've wandered into a maze.

The open space of the famous churchyard, with its multitude of clipped yews, appears with jarring suddenness amid the closely packed houses. There is no discernable centre of town, just streets wandering here and there along the hillside.

The church is unusual for more than the yews in the churchyard. The porch is a striking addition of smooth stone blocks, and in the northeast angle of the tower is an exterior door descending a curving stair to the ground. something I've never seen before.

More self catering near Painswick

More bed and breakfasts near Painswick

Self Catering near Painswick