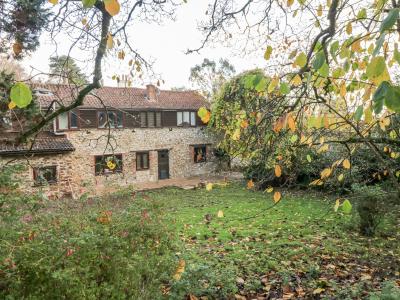 This semi-detached cottage rests in Mamhead near Dawlish, Devon and can sleep six people in three bedrooms.

Outside you can find a private patio and lawn with furniture and a gas barbecue, 18 acres of shared land and off-road parking for two cars. Swallows Nest at Magnolia Lake is a superb property for a family escape to Devon.

Avoid at all costs along with any Sykes property!
Upon arrival and after having getting lost due to the place being hard to find, the owner was quite rude asking why we couldn?t understand simple instructions and did we not know our left from our right! Entering the property, immediately hit with a strong damp smell and hoped it was initial mustiness as it may not have been rented for a while. Wish I?d read the reviews but booked in haste due to Covid being so rife at the location we were in previously! Property was cold and no wood to be seen for the wood burner. Small radiators were dotted around but obviously not adequate for the size of the property. Most plug sockets had rodent repellents plugged into them which was slightly un-nerving. Couldn?t unpack due to bedroom furniture wreaking of old/damp smell and the huge amount of fabric softener used on the bed linen (to mask the damp smell) made us feel quite sick! We couldn?t get the en-suite shower to below boiling point but luckily there was another in the twin bedded room next to ours. My parents room didn?t smell quite as damp as luckily they had the one without the whole that had leaked when it rained previously. So glad they didn?t have our room as the bat flying around due to a gaping whole between the beams, in the middle of the night would have frightened my Mom half to death. Also with my Dads COPD, the damp would have got on his chest. It was bad enough in the lounge and we discovered the paint peeling off around the window and the walls were turning black. As there was nothing the owner could have done as a quick fix to sort the damp problem out whilst we were there, we decided to leave the next morning especially after finding rodent droppings in the kitchen! All in all l, we had spent one night in the cottage from hell which didn?t even deserve one out of the four ticks that Sykes had awarded it! Sykes have been very unsupportive and couldn?t even be bothered to look into our issue and just kept emailing back asking me to quote a reference number they?d given our supposed complaint! I did so on each occasion, only to be given the same response every time - infuriating!! Only after contacting hometogo who I originally booked with, did they reply with a response they would speak to the owner and send someone to inspect the property! Of course they took the owners word that there is nothing wrong and couldn?t see why we only stayed one night (I have never deserted a holiday property in my life before)!! And apparently they sent someone over to inspect who also could not see why we felt any reason to leave!!!! I am going to take this further as they should not be allowed to continue to rip people off and there seems to be a recurring habit of people being robbed of their security bond by being blamed for ridiculous reasons of damage, which in many cases was already done! Sykes Cottages and their many subsidiaries (devised to con people further) should be struck off in my opinion as there are thousands of unhappy customers, which in itself proves what a dispicable company they are! AVOID at all costs
Y6861XLlouisem
2021-11-08

Very disappointing!
?Overall, although the property can be said to be characterful and in a lovely area, it wasn't worth a price tag of £1908 for one week!? I was interested to see that the same week in 2022 is £1782 and in a few weeks time it is £808 ... but I suppose Covid has made many companies a little greedier than normal! We arrived to a smell of damp throughout the building, a broken window on the landing and windows that had not been cleaned inside or out for some time. There was no welcome box on arrival which one would expect when paying this kind of money. There were 2 dishwasher tablets for the week and enough washing up liquid to last a few days. No logs for the fire, numerous cobwebs throughout the house and two chipped mugs in the kitchen. All a little trivial but not really what you'd expect for £1908. Upon leaving, £135 was taken from my bank account for 6 very average and used towels which the owner claimed were stained. Two of which I was aware of when returning home and offered to pay for - my son failed to tell me until the question was asked - four of which were almost certainly not stained by us as they were only used for showering. Sykes offered little in the way of support and took the money without investigation, totally taking the side of the owner who offered no proof other than a not very clear photo. After a little further research, which I should have done prior to the booking, I discovered a number of similar reviews, some of which were from customers who had worse experiences with the owner and Sykes than we did ... and by magic, as I started to complain to Sykes, a positive review for the property appeared on their website, pushing the negative one which was already there out of view. What promised to be a lovely holiday left a rather sour taste. C'est la vie.
Andy P
2021-09-02

Don't book this place.
The place is so damp you can smell it as soon as you enter. The pictures on Sykes Holiday Cottages don't give you an accurate reflection of what it's like. When we arrived it had obviously not been cleaned properly with dust all over the place and dirty windows which had not been cleaned in ages. Windows, blinds, toilet seat were all broken. The fridge was rusty and there was no BBQ or Sky TV as advertised. The reply from the owners on the Sykes site about the BBQ is not true. We were told that they were all broken and that they had no gas. How they can charge what they do for a property in such a state is beyond me. They had all of last year during lockdown to bring it up to scratch but clearly weren't bothered.
DisCriticH2969CI
2021-09-01

Do not book this place
The whole place is very damp indeed. Even the bed linen smelt damp and I never unpacked my clothes from my case as the drawers & wardrobes smelt damp. There is wallpaper literally coming off the walls. If you open the windows, frames which have not been cleaned for years inside and out, they are very difficult to close again as they are so old. No Sky TV as advertised. No BBQ as advertised. When asking about the BBQ we were told they used to have some, were told they would clean one for us but it never materialised. Toilet seat broken, blinds broken. Came home one day and there were bees in the bedroom. Advised there were bees nests in the roof, again owner just didn't care. Extension cables everywhere, electrics positively dangerous. Should be reported to the authorities. Paid nearly £1000 for a week here, absolute dump. Do not book.
Alison T
2021-08-09

A great disappointment and disgusting customer care
When we eventually arrived after going round in circles, very poor direction details. A very small sign for the cottage which is well hidden by foliage.We arrived at Swallows Nest and it stank of damp. We later realised the reason, water poured through the ceiling in our bedroom when it rained. There was supposed to be central heating but there were four plug in radiators. There was no Sky Q or Sky sports as advertised, pathetic excuses that Sky had issues!! I notice they have removed details of Sky and central heating. The worst part of our scenario was the attitude of the owners and Sykes, they were not interested in our issues at all. They are both only interested in taking your money. Very disappointing situation and after a long awaited holiday, was spoilt by by no one even listening to our problems. I think Trading Standards will be very interested in our holiday at Swallows Nest.
Gayev2015
2021-07-22

Get an Ordnance Survey map covering the Dawlish area.