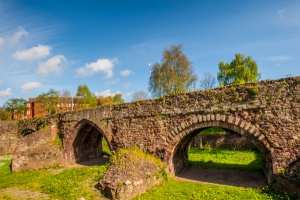 Around 1180 Robert Courtenay, Earl of Devon granted Nicholas Gervase land outside the city walls of Exeter, an area of marshland reclaimed by a series of water channels, or leats. Gervase was a wealthy merchant, who intended to build a mill on the water channel that drained into the harbour.

Gervase and his son Walter, who served four times as Mayor of Exeter, raised money to build the first stone ridge cross the River Exe. Essentially Nicholas and Walter canvassed their wealthy friends for contributions towards a bridge across the Exe. Such a bridge could only encourage transportation and trade, benefitting them all.

Not only did they raise enough money to build the bridge, but they were able to purchase property whose income could provide funds to maintain the bridge indefinitely. Walter Gervase set up the Exe Bridge Trust to oversee the properties and provide funds for bridge maintenance.

We do not know exactly when construction on the bridge began, but it may have been as early as 1190. That makes the Exe Bridge the oldest surviving substantial stone bridge in England. The bridge was finished by 1238 and spanned 750 feet.

Remains of the bridge are now stranded in a public park, with no water to be seen. There are eight and a half arches remaining, but the original bridge had twice that many arches. The stone is a type of volcanic rock called 'trap', found at several nearby quarries. 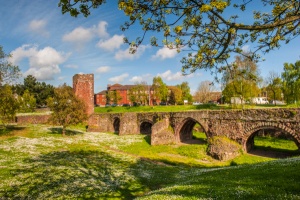 Looking across the park to the bridge
and St Edmund's chapel

The original bridge had a chapel at each end, built into the bridge structure. The east chapel was dedicated to St Edmund, and the west chapel to St Thomas. St Thomas's chapel was removed in 1778. St Edmund's was destroyed by fire in 1832 and rebuilt in 1833. During the medieval period houses were built onto the bridge, projecting out over the edge of the span. The houses were built by the Exe Bridge Trust as part of their mandate to provide money to maintain the bridge.

By the 18th century, the narrow medieval bridge could no longer handle the traffic volume crossing the Exe, and it became a major source of congestion. A new three-arch bridge designed by Joseph Dixon was erected in 1778, linked by a roadway appropriately named New Bridge Street. That 18th-century structure was replaced in 1905 by an iron bridge.

Then in the late 1960s, a new project was begun to construct 2 new bridges to improve traffic flow, and the remains the eastern end of the medieval bridge were discovered intact.

The bridge and chapel were left as a historic attraction in the centre of the new road complex, in a park area just off Frog Street. Part of the park design incorporates foundations of medieval stone houses that lined the original river banks.

The Old Exe Bridge is bounded by Edmund Street and Frog Street, near the river. The bridge is viewable at any time. 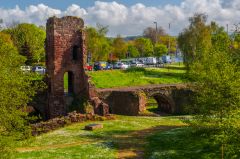 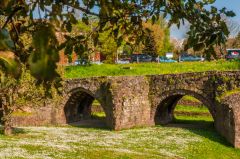 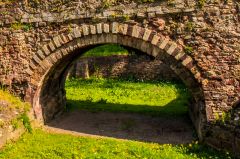 More self catering near Old Bridge