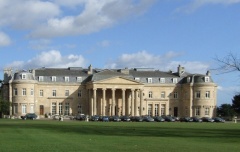 Luton Hoo's reputation as one of Britain's great treasure houses is well deserved, though it will be a disappointment to most travellers that the palatial mansion is now a private hotel and no longer receives visitors.

The house was built in 1767 by prominent architect Robert Adam for the 3rd Earl of Bute. Little of Adams' work remains, as the house that he built was remodelled by Robert Smirke around 1840. Smirke's design was swept away in a devastating fire in 1843.

A wealthy Liverpool solicitor named John Leigh was responsible for rebuilding the house and adding a grand entrance portico. Later still, a mansard roof was added by Mewes and Davis, architects of the Ritz Hotel.

In 1903 the house was bought by diamond magnate Julius Wernher, who decorated the interior in lavish French style and stuffed every cranny and corner with a collection of jewellery, paintings, porcelain, and objets d'art.

There is medieval ivory and jewellery from Spain, rare tapestries, and canvases by Rubens, Titian, Hals, Hobbema, and Fillipino Lippi. There is a Russian collection of court costumes and exquisite Faberge eggs, plus mementoes of the Russian royal family.

The extensive parklands (1053 acres) provide the perfect setting for the house. The grounds were laid out by Capability Brown in the 18th century, with the modern additions of a rockery and formal gardens.

NOTE: Luton Hoo is now a privately owned luxury hotel and is no longer open to the public.