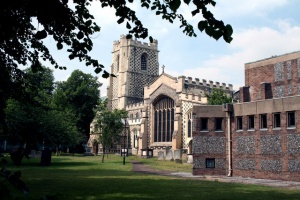 There was a church on this spot as early as 931 AD, but the present building is largely the result of 13th-century rebuilding. The exterior is notable for the chequerwork pattern of stone and flint. The crenellated tower is mostly 15th century, though the base is earlier.

The south door (1530) is known as the Wolsey Door, after Cardinal Wolsey, a patron of the church. The south aisle contains the oldest part of the church, a strikingly simple early Norman arch into the nave.

Sprouting off the north transept is the 14th century Wenlock Chapel, protected by a double-arched screen of 1461 which came from Luton Hoo. Beneath the screen are the tombs of William Wenlock (d. 1392) and Lady Alice Rotherham.

The 14th-century baptistery was presented by Queen Phillippa, wife of Edward III, when the crown held the living of St. Mary's. The chamber holds a Purbeck marble font of 1330, donated by Richard Barnard, whose effigy is in the south aisle.