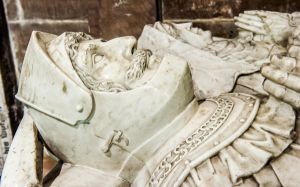 St Lawrence Church at Over Peover is an odd building, a curious mix of medieval and later Georgian architecture. It began in the 12th century as a chapel of ease for Rostherne, seven miles distant.

The Georgian nature of the church is most immediately obvious, as a curious two-faced sundial memorial dated to 1717 stands at the entrance to the footpath leading to the church. In the churchyard is a restored preaching cross thought to have been damaged by Parliamentary troops during the Civil War.

The tower is a prominent feature, made of red brick in 1739. You enter through the 14th-century porch; the oldest part of the church still standing. The nave dates from 1811, but retains several medieval features including a 15th-century font and medieval holy water stoup.

On the west wall is a royal coat of arms dating to the reign of Charles II, while on the north wall is a large American flag, a reminder that General George Patton and the US 3rd Army were stationed at Peover prior to the D-Day landings. Patton presented the flag when he left Peover, and this thought to be the only example in England where a US flag is on permanent display. 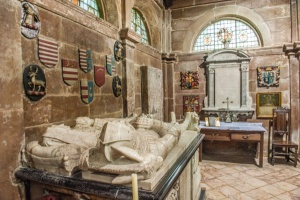 These details are interesting, but now we come to the real historical interest in St Lawrence church; the Mainwaring memorials. On the north side of the sanctuary is a large table tomb topped with a pair of beautifully carved effigies traditionally thought to represent Sir John Mainwaring (d. 1481) and his wife Joan.

However, another theory - based on the type of costume depicted - is that the effigies are much older, perhaps the very early 15th century.

Beyond the table tomb is the marvellous North Chapel, a treasure trove of historic monuments to generations of Mainwarings.

The largest monument is to Sir Philip Mainwaring (d. 1648) and his wife Ellen. It was Ellen who built the elegant stable block at Peover Hall, beside the church. Two alabaster memorial slabs hang against the north wall.

The south chapel, off the nave, has a final treasure in the form of a marvellous canopied tomb to Sir Randle (or Ranulphus) Mainwaring and his wife Margery. The chapel was built in 1456 as a chantry and is separated from the nave by a finely carved wooden screen.

One family tradition suggests that Sir Randle was buried in the churchyard, and Margery then extended the tomb niche over his grave and joined the structure onto the body of the chapel.

Though the day was dull and rainy, our visit to Peover Hall and Over Peover church was a delight. The church is a wonderful treasure chest of historic monuments and is well worth a visit even when the hall is not open. 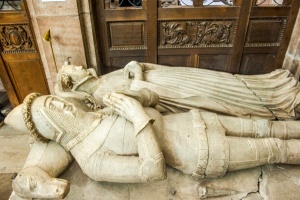 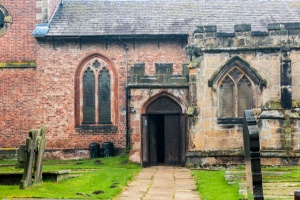 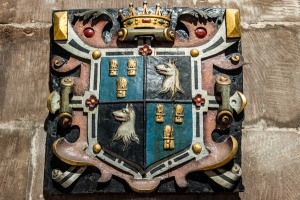 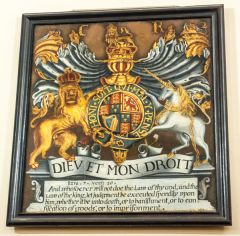 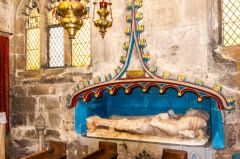 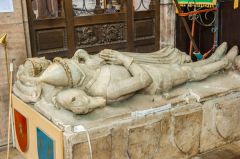 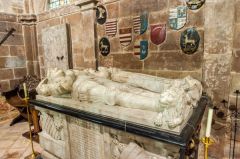 More self catering near Over Peover, St Lawrence Church >>

More bed and breakfasts near Over Peover, St Lawrence Church >>