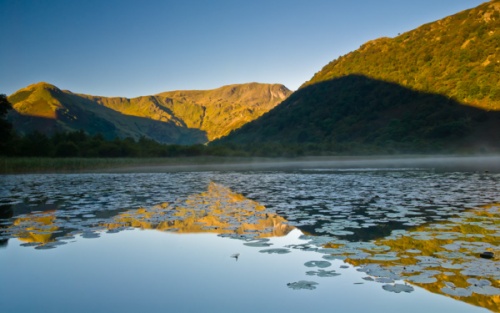 One of the smallest - and prettiest - of the lakes in the Lake District, Brothers Water is only about half a mile from tip to toe, and less than 1/4 mile wide. The lake is located at the foot of Kirkstone Pass, where the road climbs from the valley of Patterdale before descending to the more visited areas of Ambleside and Windermere.

The lake was originally called Broad Water - a somewhat curious moniker given its diminutive size - but was apparently renamed in the Victorian period after two brothers were drowned in the lake.

Brothers Water is now owned by the National Trust, who manage it as part of a natural preservation scheme aimed at conserving the ecology, flora, and fauna of the area. A signboard outlining the Trust's preservation scheme can be found at the car park at Cow Bridge, just north of Hartsop, off the A592.

From the parking lot, a waymarked trail leads along the western shore of the lake before looping further south around the medieval farmhouse of Hartsop Hall. The farmhouse, which was built in the 15th century, is owned by the National Trust but leased to a local farmer. Trails lead from the farmhouse back around the southern tip of Brothers Water and north along the shoreline.

There is a small beach at the southern end, where lily pads abound. The trail does not follow the lake all the way to the northern tip, but rather, crosses the A592 and loops through the village of Hartsop before reaching the parking area once more. Hartsop itself is an attractive place, known for its 17th-century' spinning galleries'. These overhangs were built onto traditional stone houses to provide a dry workspace below.

As part of the protection scheme, no boating or other human activity is permitted on the lake, but there is a grassed area on the southwestern corner which makes a lovely picnic spot, and the trails around the lake make for a very enjoyable walk. There are further trails up into the hills above Hartsop which provide excellent views over the surrounding area.

A short climb from Brothers Water leads to Kirkstone Pass, the highest road pass in the National Park at 1489 feet. At the summit, you will find the popular Kirkstone Inn, the third-highest inn in England.

The long steep climb up from Ambleside was known as 'The Struggle'. It was so steep that coach passengers had to get out and walk to save the horses. The name Kirkstone is said to come from the fact that nearby rock formations were reminiscent of churches. 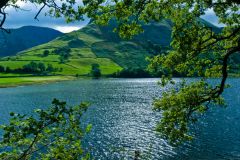 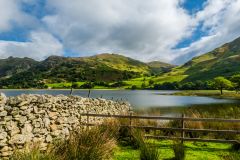 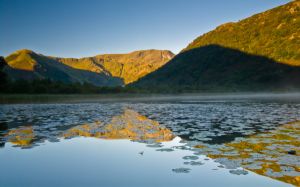 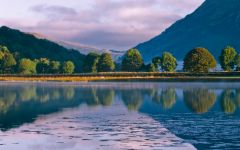 More self catering near Brothers Water