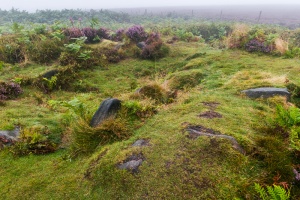 Hob Hurst's House is a prehistoric burial chamber on Baslow Moor, built in an unusual rectangular shape, The mound is roughly 8 x 7.5 m and 1 m high. The burial chamber is something of a cross between a round cairn (except it isn't round) and a saucer barrow.

Within the barrow is a stone cist in which cremated human bones were found. There is a drystone retaining wall around the cairn, and the whole is contained within a rock-cut ditch and an outer bank. It is possible that the ditch was a later addition and not part of the original burial mound.

The mound was erected around 1000 BC, and the curious name refers to an old folk tale that a giant, or in some versions, an elf, named Hob Hurst lived in ancient barrows. The mound was excavated in 1853 by a local antiquarian named Thomas Bateman, who found human remains in 2 clusters, one in the corner of the stone cist and the other cluster to one side.

Hob Hurst's House was one of the first historic sites to be preserved under the 1882 Ancient Monument Act. A series of rectangular stone bollards surround the earthworks, inscribed with 'VR' for ' Victoria Regina' (Queen Victoria). On either side of the earthworks you can trace the route of ancient packhorse trails, one of which cuts across part of the earthworks. 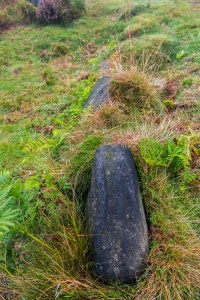 The good news is that it is fairly easy to find the burial mound once you find the well-marked trail across the moor. The bad news is that the start of the trail is not marked at all. The official directions on the English Heritage website give the address as simply 'On open moorland', which isn't terribly helpful.

Here's the easiest way we found to reach the site:

Take the minor road off the B6012 at Beeley, heading east. The road climbs through Beeley Plantation and then runs beside Hell Bank Plantation. At the point where the road turns sharply right (south-east) onto open moorland, there is a wide gravel area with room for several vehicles. There is no signpost, but it is really the only obvious place to park before you head onto open moorland.

Take the farm track downhill, past the first farm gate, to a second gate with a stone stile. Go over the stile, and you will see a small sign to Hob Hurst's House heading up a holloway to the right. From this point, the trail is well marked, with footpath arrows at regular intervals, so it is easy to follow.

The trail runs parallel to a field boundary before reaching Bunker's Hill plantation. It follows the edge of the plantation before turning right onto the moor for 100 yards to the enclosure surrounding Hob Hurst's House.

Be prepared for whatever the weather throws at you; it can be extremely misty on the moors at times, as we discovered, and the ground will be muddy after rain. The walk takes about 30 minutes from the parking area, so plan on at least an hour round trip.

As for the burial mound itself, it was overgrown with bracken in mid-September when we visited, but the square outline was clearly visible and you can climb onto the earthen wall of the chamber to get a better sense of the design. The stones supporting the cist and side walls are easy to make out, and you can easily trace the course of the packhorse trails. 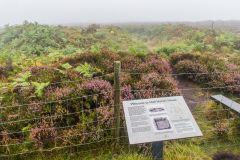 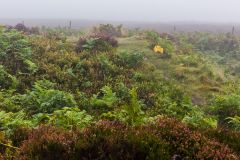 Self Catering near Baslow