HERITAGE HIGHLIGHTS:   12th-century carving of a pilgrim, and the 1488 Cockayne tomb 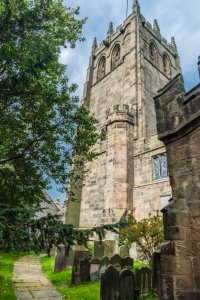 There was a Saxon church in Youlgreave as early as the 8th century, but the building we see today was begun in the early 12th century at a meeting of roads in the centre of this attractive village. The first written record of a church comes from 1155, though the village itself was mentioned in the Domesday Book of 1086.

Records show that in the year 1050 the church in Youlgreave was granted to St Mary's Abbey in Leicester. The oldest part of the church is the nave and north aisle, built between 1150-1170, while the south aisle and chancel were added in the 14th century and the striking west tower a century later.

The entire church was restored by Richard Norman Shaw in 1869. Unlike many Victorian church restorers, Shaw had a light hand, and preserved much of the original medieval character and detailed stonework.

Just inside the south door is the finely carved Norman font, with a peculiar carving of an inverted serpent, or salamander, supporting an odd stoup, or extension of the main font bowl.

Facing the entrance, on the north wall of the nave, is a small 12th century carved figure thought to represent a robed pilgrim. Another small carved figure is set into the nave wall; this looks much older, possibly Saxon, and shows a figure standing between tall stalks of foliage.

There is no information panel to suggest what it might represent. The nave roof is 15th century and features decorative bosses in the shape of grotesque creatures mixed with heraldic shields. 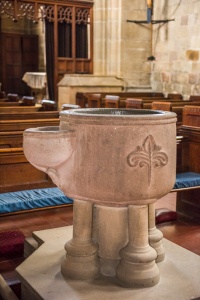 In the north aisle is an alabaster reredos dated 1492 and erected to commemorate Robert Gilbert and his wife Joan. Also in the north aisle is an ornate tomb to Roger Rooe (d. 1613) and his wife showing the couple facing each other, with their 8 children arrayed on a frieze below. What I liked was the exceptionally tall hat that Lady Rooe wears; it looks a gent's top hat.

Also in the north aisle, look for the moving memorial window to Rennie Crompton Waterhouse of Lomberdale Hall, Middleton-by-Youlgreave, who died at Gallipoli in 1915.

The window glass was gathered from the ruined cathedral at Ypres and other destroyed churches in Flanders, and brought back to Youlgreave by his brother Charles. Near the north aisle altar is a piscina supported on a wonderful carved head that appears to be of Norman date.

In a chancel are a pair of medieval tombs. The finest is to Thomas Cockayne, who died in 1488 after a fight over a family marriage settlement. Cockayne was on his way to the church in Polesworth, Warwickshire, when he fell out with his friend, Thomas Burdett. The two men began to brawl, and the brawl then became a duel in which Cockayne took a fatal injury and died.

Another version of the tale says that Cockayne simply stumbled and fell onto his friend's sword, which does stretch credulity just a bit! Cockayne's effigy is smaller than life-sized, indicating that he died before his father.

The entire altar tomb is just 3'6" long, and is decorated with heraldic shields added in 1873 by his descendants. According to the church guide, the effigy was discovered mouldering away in a barn. 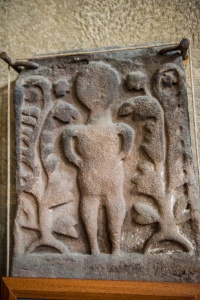 In an interesting side note, Thomas Cockayne's father John was a notable supporter of the Yorkist cause in the Wars of the Roses and in 1461 was recorded as leading a band of armed men around the local countryside, looting wantonly and 'killing and dispoiling the king’s subjects'.

John's Yorkist sympathies explains why Thomas' effigy is shown wearing a collar decorated with Yorkist symbols such as suns and roses. In a curious twist that shows how volatile the politics of the Wars of the Roses could be, Cockayne tombs at Ashbourne show earlier generations of the family sporting Lancastrian collars.

The other chancel tomb is a worn effigy dated to the 13th century and thought to represent Sir John Rossington. Rising above the high altar is the great east window, with stained glass by the William Morris Company, designed by the Pre-Raphaelite master Edward Burne-Jones.

A note about names

There seems to be confusion over whether this attractive village near Bakewell is properly called Youlgreave or Youlgrave, and you will see even official sources at odds with each other. We've chosen to go with Youlgreave, which is what Ordnance Survey use, and is what the church of England call the parish. 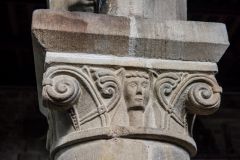 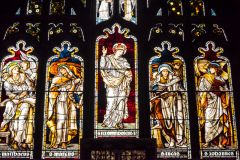 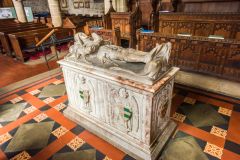 More self catering near Youlgreave, All Saints Church

More bed and breakfasts near Youlgreave, All Saints Church