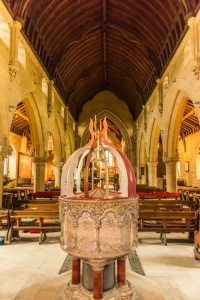 Looking down the nave of
St Peter's Church, Edensor

St Peter's is a wonderful example of a Victorian Gothic church in an idyllic estate village not far from Chatsworth House. It was designed by Sir Gilbert Scott for the 6th Duke of Devonshire and incorporates an older Norman church on the same site.

There was probably a Saxon church serving Edensor, though this was replaced early in the Norman period. The first written record comes during the reign of King Stephen, when Henry Fulcher gave the living to the monastery of Rocester in Staffordshire. In exchange, the monks agreed to say prayers for the souls of Fulcher and his family.

Very little remains of the Norman church, for in 1867 the Duke of Devonshire called in architect Sir Gilbert Scott to design a completely new church in Early English style, with two aisles, a clerestoried nave, and south porch in 15th-century style. The westernmost arch in the nave has a Saxon capital on the south side and a repaired Norman capital on the north. It is fascinating to see the contrast in styles and stonework.

Scott retained stonework in the pillars and arches, but the best surviving feature of the earlier church is the superb memorial in the chapel erected by Bess of Hardwick to her 2 sons, Henry and William Cavendish. William (d. 1626) was the 1st Earl of Devonshire and is shown in a shroud with his face revealed. Henry, who died in 1616, is depicted as a skeleton on a soldier's straw mat.

The figures are flanked by military symbols and capped by a large broken pediment. To one side is a figure of Mars, God of War, to represent Henry, who was a soldier. On the other is Athena, Goddess of Wisdom, bearing the head of Medusa, snakes still vigorously writhing. The monument is attributed to Maximilian Colt, who also designed the tomb of Bess's second husband, the 6th Earl of Shrewsbury, in Westminster Abbey. 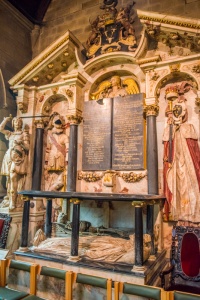 On the east wall of the Cavendish Chapel is a memorial to Charles Frederick Cavendish, who was murdered in Phoenix Park, Dublin, in 1882. In a glass case on the nearby wall is a wreath sent by Queen Victoria to the funeral.

Aside from the Cavendish memorial, the finest historical feature is a worn brass to John Beton, the comptroller of Mary, Queen of Scots household. Beton helped rescue Mary from imprisonment at Lochleven Castle, and accompanied her into exile in England. He died of dysentery at the age of 32 while attending Mary during her captivity at nearby Chatsworth House. Beton is buried somewhere in the churchyard.

Also in the churchyard, at the top of the slope looking down on the south entrance, are the Cavendish family graves, including several Dukes of Devonshire. A popular grave for American visitors is that of Kathleen, Marchioness of Hartington, sister of John F Kennedy.

Down the slope from the Cavendish graves is a large altar tomb to architect and gardener Joseph Paxton, who died in 1865. Paxton served the 6th Duke as Head Gardener, and designed the impressive Cascades at Chatsworth House. He is perhaps best remembered as the architect of the Crystal Palace building for the 1851 Great Exhibition in London. 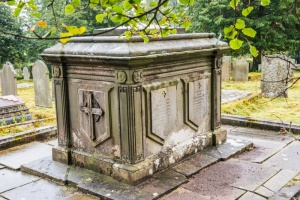 Joseph Paxton's grave in the churchyard

From 1838 Paxton designed and built the new estate village of Edensor, which had originally stood near the west bank of the River Derwent. The 6th Duke wanted to remove all the old cottages that could be seen from Chatsworth House, so the villagers were temporarily moved, and Paxton designed a completely new village. The new village of Edensor was laid out on two roads diverging from a triangular green below the old Norman church. A memorial plaque to Paxton is set on the wall near the font.

On the left of the churchyard path is a 19th-century cross on a plinth of 3 stone steps. The steps are thought to be from a preaching cross erected outside the earliest Saxon church on this site.

Edensor church seems to make it onto every list of 'must-see' churches in Derbyshire. Having visited, I can see why, even though we came on a rainy, grey day. The Cavendish memorial is extraordinary, and well worth a visit to see on its own. As a big fan of Joseph Paxton, it was quite moving to see his tomb and the village that he designed for the 6th Duke of Devonshire.

Do take time to explore the village of Edensor itself; the cottages are a delight, a wonderful example of a 19th-century estate village in romanticised Gothic style. St Peters is usually open daylight hours. 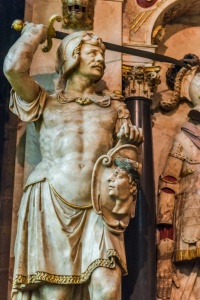 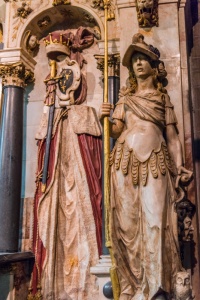 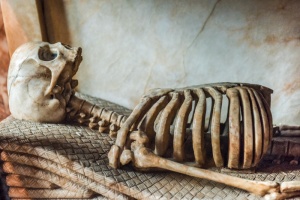 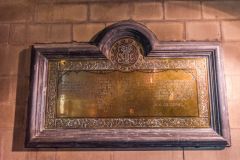 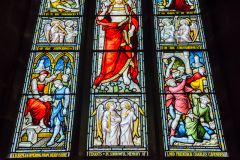 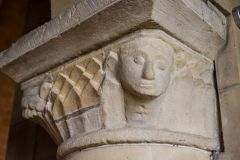