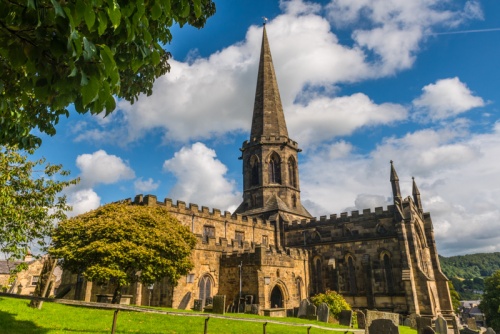 All Saints church in Bakewell is one of the finest medieval parish churches in England, with a history dating back to the Saxon period. Even that church was probably not the first, for the area was settled by Roman Christians as early as the 2nd century.

In the late 7th century, a wave of missionaries came to the Peak District from Northumberland. The missionaries founded minster churches, serving not just a single settlement but a large area. One of these minster churches was established at Bakewell, on a hillside site overlooking the growing town.

Leaning against the porch are 5 ancient stone coffins, probably also from the Saxon period. 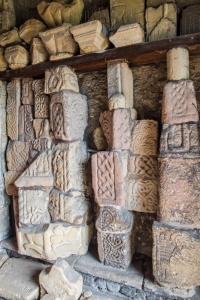 Saxon carved stones
in the porch

The church was devastated by Danish raids, and in the 10th century a new church was built on the same site. That 10th century church must have been a very important one locally, for the Domesday Book of 1086 records that Bakewell was one of only two churches in Derbyshire rich enough to have 2 priests.

In 1110 William Peverel, the Norman lord of Bakewell, built a new church in Bakewell. Parts of this 12th-century church remain, particularly the large arches at the west end of the nave. In the late 13th-century much of the church was rebuilt in Early English style, including the south transept, which became known as the 'Newark' from a combination of the words 'new work'.

A 14th-century oak screen divides the Newark into two parts. To the east are a pair of former chantry chapels, now home to ornate alabaster memorials to the Manners and Vernon families. Perhaps the most interesting monument is that of Sir George Vernon, known as 'The King of the Peak'.

Vernon was born at nearby Haddon Hall in 1503 and died in 1565. He was made a knight at Edward VI's coronation. Vernon was known for his severe and high-handed administration of justice, and he often had men hanged without trial.

Vernon was involved in one of the most famous episodes in local history, when in 1563 his youngest daughter Dorothy eloped with Sir John Manners. Vernon had rejected Manners as a suitable match for his daughter, calling him 'the second son of an impoverished Earl'.

Dorothy had other ideas, however, and during a wedding party at Haddon celebrating the marriage of her elder sister, she slipped out the back door of the Hall, ran across the gardens, and over a medieval packhorse bridge to where Sir John was waiting. The couple rode through the night to Leicestershire where they were married. Faced with a fait accompli, Vernon gave in, and even helped transfer Haddon Hall to the Manners family. 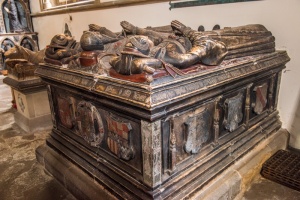 Tomb of Sir George Vernon,
'King of the Peak'

A monument to Sir John and Lady Dorothy stands in the Newark, not far from Sir George's tomb. Also in the Newark is the tomb of John Vernon, who died in 1477, and Sir George Manners and his wife Grace, who founded the Lady Manners School in Bakewell.

Just outside the Newark is an alabaster wall monument to Sir Godfrey Foljambe and his wife, built in 1385. Foljambe served as Constable of High Peak, and the beautifully carved monument reflects his status. Beside the monument is a painted wooden shield depicting the coats of arms of both England and France, a reminder of the strong medieval link between the two countries.

Over the 14th century the church was enlarged, a central tower erected, and the south porch added. The north aisle gained a lovely timber roof with richly carved bosses. Also in the north aisle is a 14th-century parish chest. Typically for the period the chest has three locks, one for each of three keyholders. 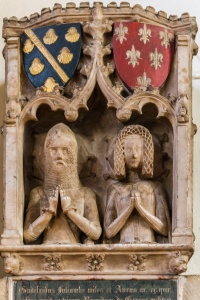 In the south-west corner of the nave is a 14th century, ornately carved with panels depicting Biblical characters. Architectural historian Niklaus Pevsner called the Bakewell font the finest in Derbyshire, and it is easy to see why.

In the chancel is a 13th-century sedilia and piscina, but even more interesting are 3 medieval misericords including a carving of a man suffering from a toothache.

More modern highlights include the Chapel of St Michael and St George, with a reredos by Sir Ninian Comper, and in the north aisle is a stained glass window by CE Kempe, with his signature wheatsheaf symbol.

Other interesting features include the memorial to Ann Graves, credited as the inventor of the Bakewell pudding. Another memorial is to Thomas Stratton, a workman who fell to his death during a Victorian restoration of the church. The unfortunate Stratton was buried where he fell.

One other note of interest is the tower clock, which has just one face, towards the town.

All Saints is a superb church, full of historical interest. The display of Saxon carved stones and the pair of crosses are worth a visit alone. Add to that the Vernon and Manners tombs and you have one of the most intriguing parish churches in the country. 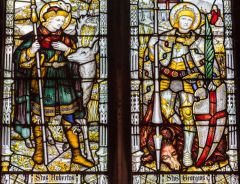 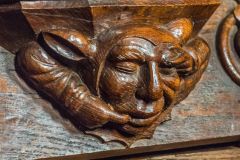 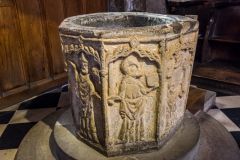 More self catering near Bakewell, All Saints Church

More bed and breakfasts near Bakewell, All Saints Church