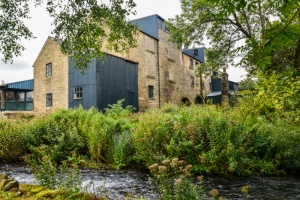 A complex of historical mill buildings stands beside the River Wye at Rowsley. Founded in 1874 and a family business for over a century, the Victorian mill still produces flour using historical equipment, driven by a water-powered turbine. You can see the mill in action and tour the original 1874 building, full of historic equipment.

There has been a mill on this spot beside the River Wye since at least the medieval period, and we know that by 1591 there was a fulling mill and a corn mill. The corn mill was torn down in 1874 when John Caudwell built the present mill building to grind flour and animal feed (provender). Caudwell's new mill was initially powered by two water wheels, driving 8 sets of millstones to grind flour and a further 3 sets to grind animal feed. 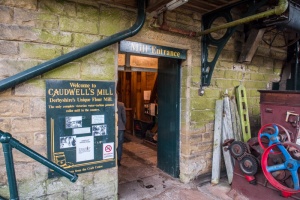 John's son Edward modernised the mill further, installing plansifters to create an even finer grade flour. He called in an experienced German firm to install the machines, but while the Germans were at work on the mill, the First World War broke out. The Germans were arrested, a few were deported, but the rest finished installing the milling machinery then were interned on the Isle of Man until the end of the war.

When the mill was converted to use the rolling method of milling rather than the old-fashioned grinding wheels, the water wheels didn't supply enough power, so a turbine engine was installed in 1897. In the following year another turbine was installed to power the animal feed mill and the wheat cleaning mill. This 1898 turbine still provides most of the electricity for the mill buildings. 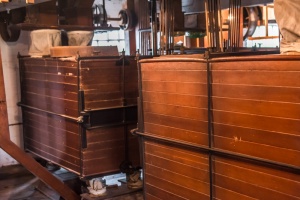 Caudwell's Mill was a family business for over a century, but in 1978 the mill closed and was threatened with demolition. A group of local people formed a charitable trust to protect the mill, and the trust continues to operate it today.

Note the word 'operate', for Caudwell Mill is more than a museum, it is an actual working mill, using historic milling equipment, most of which dates from before 1914. The milling machinery is still driven by the Victorian system of leather belts and pulleys. There are 22 pairs of roller mills, two purifiers, and four plansifters used to create fine flour.

Information panels help explain the milling process and the history of the Caudwell's Mill as you follow a self-guided tour over 4 floors of the old mill building.

We came to Caudwell's Mill on a wet, grey day in September; not the sort of day to hang about outside and take photos, but I did anyway! As you approach the mill it is partly screened by tall trees, so it appears wrapped in greenery. There is a path that crosses the leat outflow, with a picnic table amid the trees. It is a very pretty spot, somewhat at odds with the more industrial looking mill buildings. 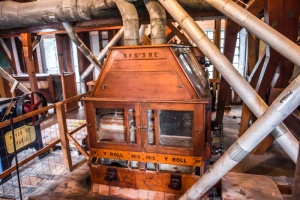 It really is easier to think of Caudwell's Mill as a complex of buildings rather than a single mill. Some of the buildings have been given over to a working craft centre, where you can see local craftspeople plying their trade. As of this writing the craftspeople include a glass artist, wildlife painter, upholsterer, blacksmith, and a stonemason.

There is a craft shop, housed in a 1908 building used for storing sacks of grain, where you get tickets and a pamphlet outlining a trail through the historic mill building. Then you are on your own to follow the trail and take as much time as you like. There were no staff inside the building, at least none that we saw. Unfortunately, on the day that we visited they were having problems with a low water supply, so the mill machinery wasn't running. On the other hand, they gave us a discounted entry to compensate, which was a nice touch.

It was fascinating to see how the milling process was carried out, but even more interesting to see the historic equipment, some of it still in regular use, and to follow the history of the site, its owners, and how it changed over time.

You can purchase more than 25 different types of flour in the museum shop, and 8 different oat products. 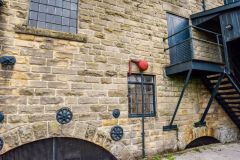 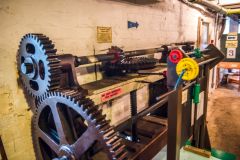 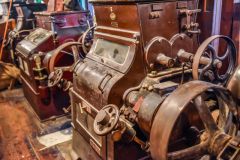 More self catering near Caudwell's Mill