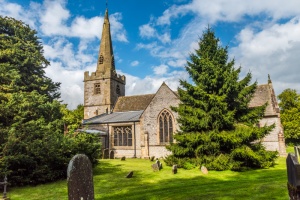 St Leonards church was built around the year 1100 and its soaring spire is a local landmark. It is remarkably large for a small village like Monyash and is one of the most interesting historic buildings in the White Peak region.

St Leonards began as a simple chapel in the early 12th century. We don't know exactly when it was built, for the first written record is from 1192, by which time it was well established.

By the end of the 12th century the chapel had grown to include a nave and chancel, featuring a beautifully carved sedilia, or seat for clerics during services. The combination of the three-seat sedilia and piscine for washing holy vessels is one of the finest in Derbyshire.

Around 1225 the two lower sections of the tower were erected, and probably topped by a spire. During the 14th century, Monyash thrived due to the demand for local lead. The lead mining industry brought prosperity, and the chapel continued to expand. In 1345 it was granted the right to hold burials. Just 3 years later the Lady Chapel was built by wealthy local lords as a chantry, with a priest to say prayers for their souls.

The aisles were added around the same time, followed by the north transept in 1370. Ornate traceried windows were inserted in the aisles, another sign of the area's wealth.

Before the end of the 14th century, another section was added to the tower and topped by the present slender octagonal spire.

Despite all these expansions, St Leonards was still a chapel, not a church. It was only in the 15th century that it gained the right to hold baptisms, as evidenced by the octagonal 15th-century font in the nave, but it did not become a full-fledged church until some time around 1650.

The font is topped by an 18th-century wooden cover. Look for the Bovill family coat of arms on the north face, commemorating the marriage of Griselda Bovill of Northampton to Richard Blackwell of Taddington, which took place during Henry VII's reign. 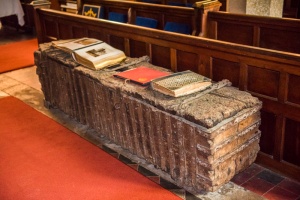 By the 19th century the medieval structure was in poor condition, and both porches and the north transept fell down. William Butterfield, one of the great Victorian church architects, was called in to restore and repair the church. Butterfield rebuilt the chancel, transept, and spire, and installed richly coloured encaustic tiles and clear glass in the windows, making the interior light and spacious.

One of the most interesting historic features is an iron-bound oak chest, thought to be of 14th-century origin. There are some lovely 18th-century wall monuments to local families, and a royal coat of arms to George II, dated 1745.

Do take time to explore Monyash. I've been several times, and think it's one of the prettiest villages in the Peak District. 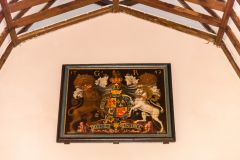 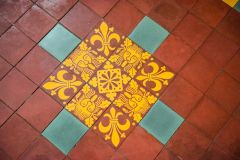 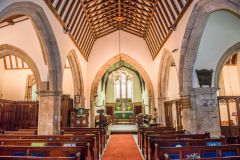