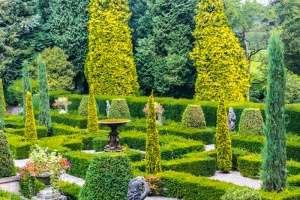 Twelve acres of formal gardens surround the Victorian mansion of Thornbridge Hall, in idyllic Peak District countryside near Ashford in the Water. The gardens were laid out from 1896 and feature statues from the demolished mansion at Clumber Park.

Thornbridge was the seat of the Longsdon family from the 12th century until the late 18th century. In 1790 John Morewood, a linen merchant, bought the estate for £10,000, and enlarged the earlier house. In 1859 Frederick Craven rebuilt the house entirely in Jacobean style, but the house as we see it today is the work of a Sheffield lawyer named George Marples.

In 1896 Marples enlarged the house and laid out the gardens. He also built estate cottages, lodges, and even a private railway station. In 1929 Charles Boot bought the estate. Boot's company earned the contract to demolish the stately home of Clumber Park after that house was destroyed in a fire in 1938. Boot rescued a large number of statues, fountains, and building facades from Clumber and installed them at Thornbridge Hall.

The house was briefly used as a teacher training college by Sheffield City Council, but is now in private ownership and used as a family home and event centre. 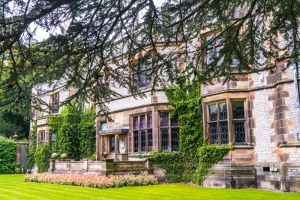 Thornbridge Hall from the lawn

Marples had a vision of a garden he called '1000 shades of green' that he wanted to view from his bedroom window. He called on the skills of Simeon Marshall of the internationally renown James Backhouses & Sons Nursery of York to design 12 acres of formal garden with a further 90 acres of park and woodland beyond.

The result is a delight, a mix of formal and informal, with echoes of 18th-century neoclassical landscape gardens and Italianate terraces. The Hall is sheltered by the chain of hills known as Longstone Edge on one side, but on the other the land falls away, offering wonderful views over the parkland and distant countryside.

The gardens are divided into several distinct areas, or 'rooms', including an Italian Garden, Koi Lake and Water Garden, grottoes, temples, a Scented Terrace, a 100-foot Herbaceous Border, Knot Garden, Orchard Fountain, Alpine garden, and more. Scattered throughout the gardens are statues brought from Chatsworth, Sydnope Hall, and Clumber Park, as well as others donated by the government of Greece. 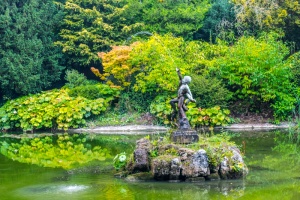 A fountain the koi pond

We visited Thornbridge on a dull, drizzly day in mid-September; the sort of day where you wonder if you are daft for going out at all. Well, if we were daft, it's a good thing, because we found Thornbridge Hall an absolute delight. In fact, I'd say it was one of the real highlights of our week in the Peak District. The formal terraces are beautifully laid out, with sudden panoramic views suddenly appearing as you round a corner, and a wonderful mix of plants of contrasting colour, shape, and size of plants.

The fountain terrace below the house was one of the highlights, but even more striking was the house reflected in the waters of the koi pond, with an extravagant fountain in the middle of the pond spouting water in a long shower. I highly recommend Thornbridge; it is well worth waiting for one of the garden open days (Thursdays from April-September when we visited).

A note about getting to Thornbridge Hall:

We used the postcode for the Hall in our satnav, which directed us down Longstone Lane from Ashford. As we discovered later, this direction is unsigned, and we had no idea when we'd actually arrived at the Hall gates. A much better way is to take the A6020 north from Ashford in the Water. Thornbridge Hall signposted off this road about 0.5 miles from the village centre. 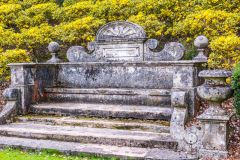 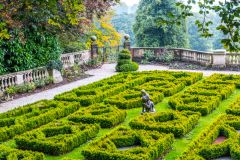