HERITAGE HIGHLIGHTS:   The birthplace of the Prayer Book Rebellion 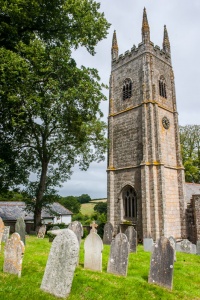 Sampford Courtenay is one of the prettiest villages in Mid-Devon, a picturesque settlement full of historic thatched and stone houses. The village is best known for its role in the 1549 Prayer Book Rebellion.

Standing on sloping ground down from the main street through Sampford Courtenay is the attractive 15th-century church of St Andrew. There was an early medieval church on the site, but like so many Devon churches St Andrew's was completely rebuilt in the 15th century, probably around 1450.

The church is composed of a wide nave and aisles of four bays. Interestingly, the nave arcade on the south side is of polyphant stone from Cornwall, while the north arcade is of granite. The appearance of the building was changed in 1831 when the rector, Rev. GP Richards, removed the chancel screen.

Enough pieces of the screen survived to enable a later rector, HBF Burnaby, to have the screen restored and re-erected in the south aisle. The church was restored again in 1899, when a west gallery was removed.

The finest historic feature inside the church is the collection of late medieval roof bosses. The best-preserved is a beautifully carved head almost directly over the altar. Other bosses include a 'hunt of Venus'; a depiction of three hares sharing three ears between them. The three hares symbol was often used to represent the Holy Trinity. 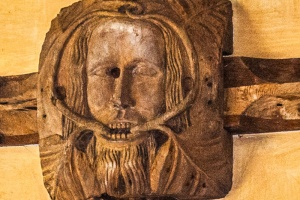 Other carved bosses represent a sow nursing her piglets, a king and queen, the arms of the Courtenay family who gave their name to the village, and a pair of Green Man heads.

Some fragments of medieval glass survived the 19th-century restorations. In the east window are 2 royal shields, while in the east window of the north aisle are a trio of angels and a plough. In the north chapel window you can see very finely crafted Renaissance borders and a figure of the Madonna.

The oldest feature in the church is the font, made of Purbeck marble around the year 1100. The font originally stood on marble shafts, but these were replaced at some point in the past. There is also an old parish chest hollowed out of a solid piece of oak.

Sampford Courtenay was the birthplace of the Prayer Book Rebellion, a reaction against a new English prayer book imposed by the King's Council. On Whit Sunday the service was read in the new English format, but on Whit Monday the parishioners of St Andrew's church refused to use the new style of worship and returned to the Latin Mass which they were used to. 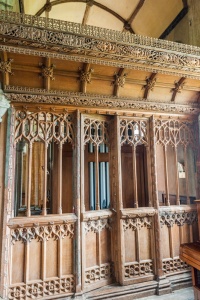 The Mass probably took place as part of a 'church ale', a Whit Monday feast at Church House, just outside the churchyard gates. Church House, also known as Court House, was used for church meetings and for holding manorial court sessions.

The local magistrates were charged with enforcing the new Prayer Book, and they reacted in force. Violence broke out, and a man named William Hellyons was killed in a fight. A plaque on the outside of Church House marks the spot where Hellyons fell.

New spread, and the rebellion erupted in several locations. The men of Sampford Courtenay joined with a band of rebels from Cornwall, and marched on Exeter gathering support as the marched. The rebels besieged the city for 6 weeks, but were repelled by royal forces and scattered. The final battle of the Rebellion took place here in Sampford Courtenay where it began.

On 17 August the rebels were completely overwhelmed. Most were tried and executed. A permanent exhibit in the church explains the origins of the conflict, and shows where and how the Battle of Sampford Courtenay took place.

St Andrew's is a lovely church, in a very pretty village. It is fascinating to explore, but very sobering to see the spot where the Prayer Book Rebellion was launched and learn about the bloody conflict that ensued. 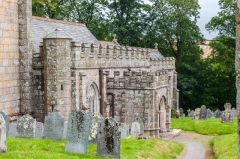 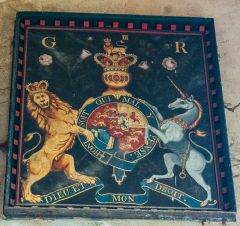 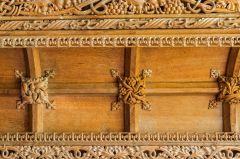 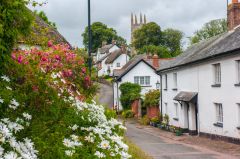 Self Catering near Sampford Courtenay