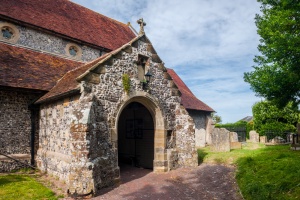 St Peter's church stands in a lovely village below the South Downs Way long distance path, a short distance west of the stately home of Firle Place, home of the Gage family. The church was built in te 12th century, as evidenced by a round-headed Romanesque doorway reset in the north wall. The chancel and tower were added in the 13th century.

The origins of St Peters go back much further in time, however. The excellent church guide suggests that a Druid sanctuary stood here in the lea of the South Downs. This early site was likely transformed into a Roman temple, and still later to a Saxon chapel. We know that a church existed here before the Norman Conquest, belonging to Witton Abbey.

After the Conquest William the Conqueror gave Firle to his half-brother Robert, Earl of Mortain, who in turn gave it to the Abbey of Grestain in Normandy. The Norman abbey eventually transferred Firle to the Dean and Chapter of Chichester.

The tower is quite striking, with very large, high buttresses at each corner. It appears to have been unbuttressed when built, and the buttresses added at a late date - probably in the 16th and 17th centuries - when the weight of the walls began to put a strain on the tower structure.

The chancel boasts 13th-century lancet windows and a piscina of the same date, and there is a 13th-century doorway in the south aisle. The aisles were rebuilt in the 14th century, as was the chancel arch. 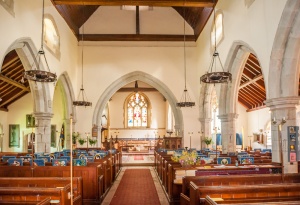 In 1595 the Elizabethan courtier John Gage of Firle Place built a north chapel to house memorials to his family. Under the chapel is the family burial vault, but it is the Gage memorials that provide the main reason to visit St Peter's church.

Though the memorials are to Gage family members who died over a period of some 40 years, they were all created at the same time by sculptor Garret Johnson (1541-1611) of Southwark when the chapel was built.

All were made for Sir John Gage, who own alabaster memorial is perhaps the finest of the family group. Sir John is shown wearing his Order of the Garter sash and lies beside his wife Philippa.

Aside from Sir John's own alabaster tomb, the Gage monuments include that of an earlier Sir John Gage (d. 1556) and his wife. Another is to Sir Edward Gage (d. 1569) and his wife, with a memorial brass showing the couple at prayer. This memorial is very similar to the second Sir John's memorial. 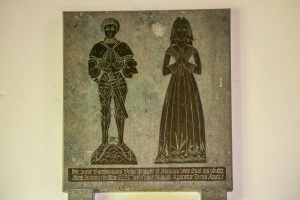 At the east end of the north aisle are several fascinating brasses, generally accounted as some of the finest in Sussex. The oldest is to Bartholomew Bolney (d1476) and his wife. The Bolney's owned West Firle before it passed to the Gages by marriage.

On the west wall of the north chapel is a brass to a late 16th-century man believed to be George Gage, son of Sir Edward. Nearby is a brass to Thomas Gage (d. 1590) and his wife Elizabeth. At the east end of the nave is a small brass memorial plaque to Mary Howard (d. 1636), depicting a shrouded figure. Mary Howard was married to Sir William Howard, grandson of the Duke of Norfolk.

One of the more modern attractions inside St Peter's is a stained glass window designed by John Piper, depicted William Blake's 'Tree of Life' from his 'Book of Job'.

Another window by the vestry was designed by CE Kempe (look for the Kempe symbol of a wheatsheaf in the stained glass border. The font bowl is probably Victorian, but rests on a stem that appears to be 15th century.

Other interior highlights include geometrical wall tiles in the chancel, thought to be by William Morris. The window behind the altar in the Lady Chapel has original 13th century stained glass.

The glass was hidden during the Reformation by parishioners who feared that iconoclasts might smash it to pieces, as happened throughout the country. The pieces of glass were hidden for many years, then replaced like a giant jigsaw puzzle, though in this case it is pretty obvious that the pieces of the puzzle were put together incorrectly.

Writer Virginia Woolf lived in Firle for several years. Her sister, painter Vanessa Bell is buried in the churchyard, as are other Bloomsbury Set members Duncan Grant and Vanessa's son, Quentin Bell. Economist John Maynard Keynes lived in Firle for 21 years and died here in 1946. Keynes is not buried here; he was cremated and his ashes scattered on the Downs above neighbouring Tilton. 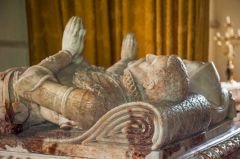 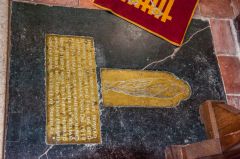