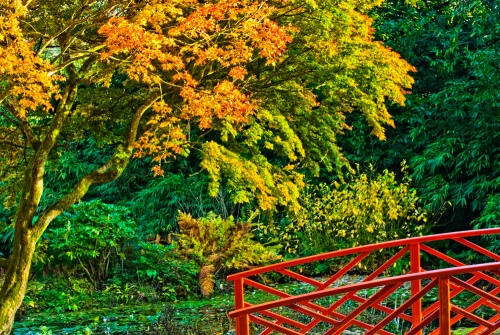 The Oriental Bridge at Batsford Arboretum

The Batsford Arboretum is the largest and most extensive private collection of trees and shrubs in Britain. The arboretum shares space in Batsford Park with the Cotswold Falconry Centre. 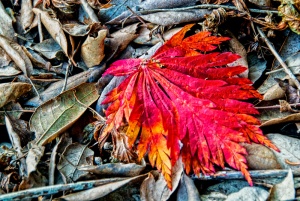 Batsford Arboretum was the brainchild of Algernon Bertram Freeman-Mitford, who inherited the Batsford estate in 1886. Freeman-Mitford, later 1st Lord Redesdale, travelled widely throughout the Orient and was heavily influenced by Chinese and Japanese culture, philosophy, and horticulture.

Upon taking possession of Batsford, he created a unique mix of parkland and garden, with groupings of plants in imitation of Chinese style. Redesdale was an expert in bamboos, and many of the bamboo plants you can see today were his plantings.

Redesdale also began to plant unusual varieties of plants and trees, beside a 600-metre long watercourse. Included in his vision were a hermit's cave, rockery, and a rest house.

The foundation established by Lord Redesdale was greatly expanded by Frederick Hamilton Wills, 2nd Lord Dulverston, who inherited Batsford in 1956. It is to Lord Dulverston that Batsford owes a great deal of its appeal today; he added considerably to the collection of trees, creating at Batsford an arboretum of the highest international standards.

Though the focus of Batsford is truly international, it is in the area of Oriental shrubs and trees that the collection shines. There are over 3,000 labelled plants, trees, and shrubs at Batsford. Notable varieties include oak, maple, mountain ash, magnolias, Japanese Cherries, bamboos, and pine.

Fee charged. For current details see the official website. A combined ticket allowing entry to the Arboretum and Falconry Centre is available. 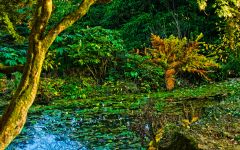 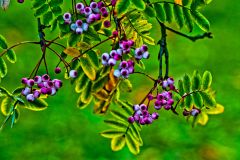 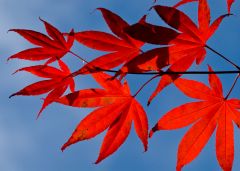 More self catering near Batsford Arboretum

Self Catering near Moreton-in-Marsh