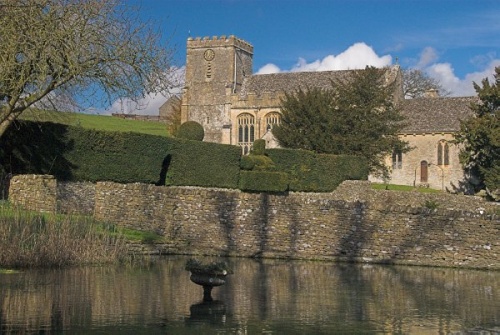 Most people come to Chedworth for the nearby Roman villa, which is a shame, for the village itself is a lovely place, quite worthy of a pleasant stay. The views from the low hills surrounding the village are quite lovely, showing off the typical Cotswold countryside of clumps of trees amid green fields and overgrown lanes.

Chedworth Roman Villa
This superb Romano-British villa, first excavated in 1864, is not in Chedworth proper, but in the nearby parish of Chedworth Woods. The setting in the secluded valley is wonderful, and Chedworth's reputation as one of the finest Roman remains in the country is well deserved. 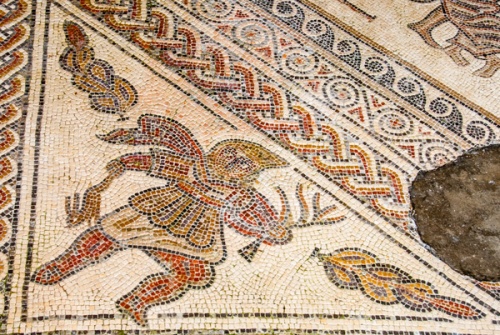 In all, 32 rooms are displayed, including two bath complexes and intricate mosaics in a variety of patterns including human and animal forms and geometric patterns. Over one mile of the villa walls can be traced, though in places the remains are scanty. Other remains include a latrine and a water-shrine.

The baths at Chedworh are unusually elaborate, with a dry heat sauna and a cold pool sharing space with a steam heat sauna. The dining area boasts a particularly fine mosaic, and the kitchen leads to a number of small rooms which were likely used as servant's quarters.

A museum showcasing items found during excavations is on the site. Part of the museum exhibits feature numerous examples of dressed stone, the most extensive collection in the country.

The villa was built between 180 AD and 350 AD and may have been occupied as late as the 6th century. There were at least 6 distinct building periods, resulting in a number of distinctly separate buildings linked together to form a complex. It has been suggested that the complex may not be a villa at all, but a religious or ritual shrine.

The location is worth noting; far enough into the countryside to be secluded, yet within 3 miles of the great Roman Road of the Fosse Way, allowing for ease of travel and communication with major centres.

Yet the location selected for the villa is a curious one; the site is shaded in winter, and at 500 feet elevation is open to the cold winds that are common to this area. It is obvious that the builders were determined to make the best of the site, for a special platform of earth was created to act as a foundation for the buildings. One of the attractions of this location may have been the presence of a spring, which is unusual in this area of the Cotswold plateau.

More self catering near Chedworth

More bed and breakfasts near Chedworth

Self Catering near Chedworth