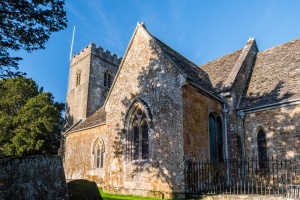 The church was largely rebuilt between 1750 and 1764, though so sympathetic was the work that the building retains a much earlier feel.

Jane Austen and Adlestrop
Novelist Jane Austen was related to Reverend Thomas Leigh, who had the living of Adlestrop. Austen is known to have visited Adlestrop on at least 3 occassions - in 1794, 1799, and 1806, and she would have worshipped in this church. The Rectory, Adlestrop House, is directly across the road from St Mary Magdalene church. It is believed that Austen used Adlestrop as a model for at least one location in her novel Mansfield Park. 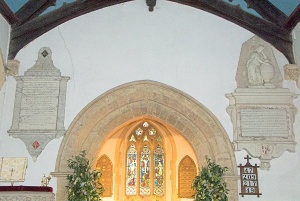 The oldest part of the church is the lovely 13th century chancel arch. This is flanked by two 18th century memorials set high into the wall. These are to two members of the Leigh family, and it does not take much investigation to find more evidence of the Leigh connection with Adlestrop; there are gravestones set into the floor of the chancel, memorial windows in the transept, funeral hatchments upon the wall, and a family vault under the south Transept.

Aside from the chancel arch, the oldest parts of the church are the tower, which dates to the 14th-15th centuries, and the font, which is cotemporary with the tower. The tower has a clock built to commemorate Queen Victoria's Golden Jubilee in 1887.

In a show of frugality, or perhaps simple common sense, the clock has only two faces, on the north and east sides of the tower, as these are the only two sides of the tower visible from the church. A lovely cast iron entry gate and lantern was added to commemorate the Queen's Diamond Jubilee in 1897.

There are several interesting, easily overlooked items of historical interest. On a window ledge in the chancel is a lovely old wooden box, carved with the date 1703. The church information placard is sadly silent on the origin and use of the box, as it is about a curious gravestone in the shape of a heart, which lies propped against the south wall of the nave.

Outside the chancel is another curious headstone, this time in the shape of a small wheel. Finally, set into the exterior south wall of the chancel is a remarkably well-preserved Elizabethan memorial, dated to 1594. It is unusual to see memorials of such a date outside, but this one has been protected from the worst of the weather by a gabled roof.

Visiting
Parking along the verge, or at the village hall car park at the bottom of the hill.The church has been open both times we've visited. 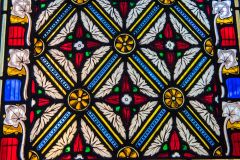 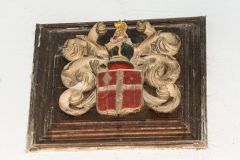 More self catering near Adlestrop

More bed and breakfasts near Adlestrop