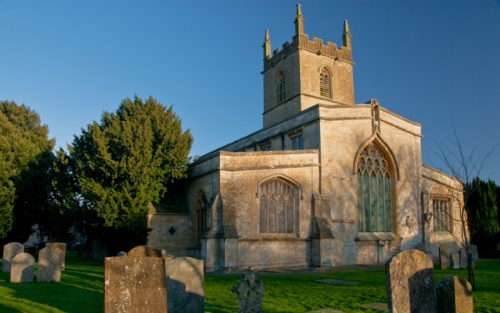 The earliest documented reference to a church in the hilltop town of Stow-on-the-Wold comes from AD 986. It is entirely possible that there was a church here long before that time, as the monks of Evesham Abbey owned land in the area as early as 708.

The church is dedicated to St Edward, but which one? There may have been an early Christian hermit at St Edward's Well at the base of Stow hill, or the Edward in question may have been the 10th-century Saxon boy-king Edward, King & Martyr. The most likely dedication, however, is the Edward the Confessor (reigned 1042-1066).

The town grew up at an important junction on the major trade route of the Fosse Way, first developed by the Romans. Stow grew wealthy during the medieval period from the wool trade, based on the high quality of fleece produced by the local 'Cotswold Lion' sheep.

The parish church of St Edward reflects the wealth of the Stow wool merchants in the medieval period. 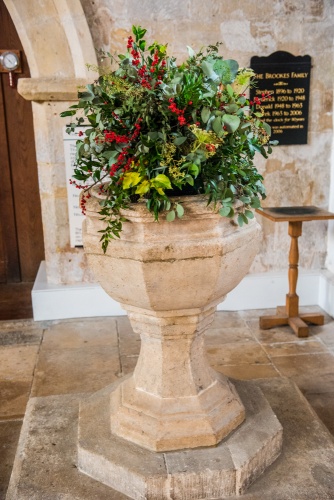 We know there was a stone church here in the 12th century but almost nothing remains of that Norman building. The oldest part of the present church is the nave, built in the 13th century, while the chancel is a century younger. The tower was rebuilt in 1445 on an older base.

The Battle of Stow

On 21 March 1646 Stow was the scene of the final battle of the first phase of the English Civil War, where Parliament's New Model Army defeated Royalists led by Sir Jacob Astley.

Royalist prisoners were held in the church after the battle. One reminder of those grim days is an incised memorial set into the chancel floor commemorating the Royalist soldier Captain Hastings Keyte of Ebrington.

Perhaps as a result of damage during the battle and its aftermath, the church was declared ruinous in 1657, but it was not fully restored until more than 20 years later.

The north porch was added in the late 17th century in Gothic Survival style, a foretaste of the Victorian Gothic Revival to come. The church was restored by JL Pearson in 1847 and again in 1859 when the nave roof was rebuilt. Pearson is best known as the architect of Truro Cathedral. 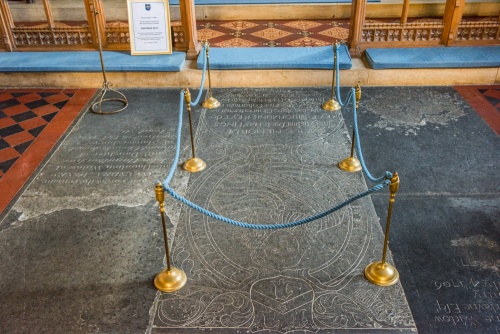 Most of the stained glass is Victorian but a pair of clerestory windows in Pre-Raphaelite style date to 1921.

Just inside the south entrance is a huge painting of a Crucifixion scene by the early 17th-century Flemish artist Gaspar de Crayer, presented to the church in 1875 by Joseph Chamberlayne of Maugersbury Manor.

Other interior features include 13th-century nave columns decorated with nailhead carving. The timber roof is supported on carved corbels depicting human heads, probably including depictions of local benefactors. The roof itself is Victorian, except for one original 15th-century beam carved with the coat of arms of John Weston, who served as the rector from 1416-38.

On the south wall of the chancel is a gilded memorial to the Chamberlayne family, lords of the manor.

The font dates to the late 16th century and is carved in a goblet shape. 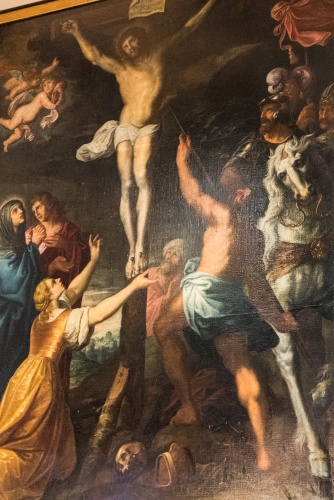 Walk around the west end of the church to the north porch and you will see an extraordinary sight; a pair of yew trees with gnarled roots almost envelope the curved doorway, making it look like something out of a JRR Tolkien tale.

Is there a connection between the doorway and the author of The Hobbit and the Lord of the Rings trilogy?

Probably not, but a tradition says that Tolkien was inspired by the doorway and the trees that shroud it to create the Doors of Durin that guarded the western entrance to the Mines of Moria and the dwarfish realm of Khazad-dÃ»m. In truth, Tolkien's illustrations for the doorway don't bear a strong resemblance to the north porch of St Edward's Church, but don't let get in the way of a good story!

As an aside, the Tolkien Society, who ought to know, have accepted the claim that the Bell Inn in the neighbouring market town of Moreton-in-Marsh was the inspiration for The Prancing Pony in Bree. 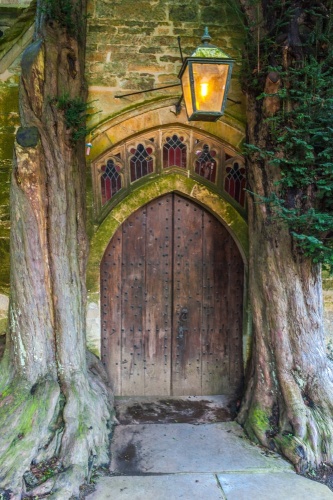 The church stands immediately off the market square in the heart of Stow. There is free parking in the square, though this can sometimes be full on a sunny summer day. Another option is to park in the free town parking area attached to the Tesco superstore on the Fosse Way. From there it is an easy 5-minute stroll to the church.

Self Catering near Stow-on-the-Wold