HERITAGE HIGHLIGHTS:   The site of a king's death - or was it murder? 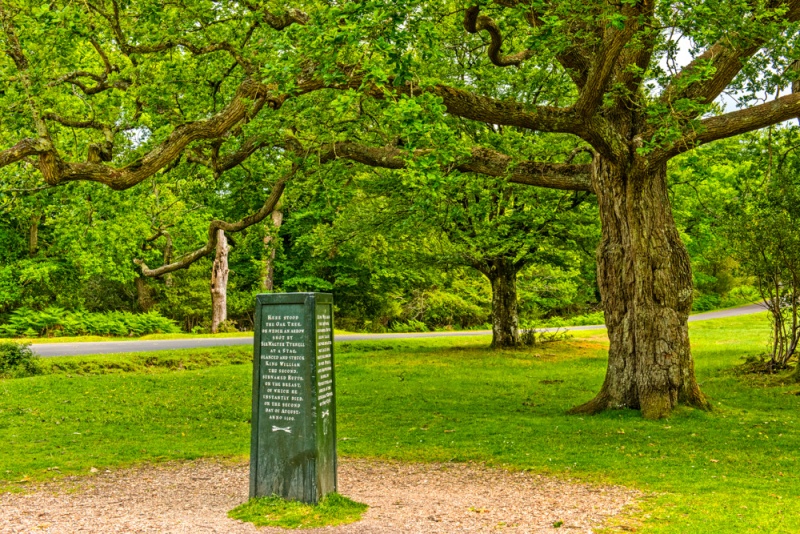 In a quiet glade at the heart of Hampshire's New Forest National Park stands a simple stone memorial. The location is idyllic, with green fields stretching out in one direction, and woodland trails in the other, while a few paces north is one of the New Forest's most popular country pubs. Yet in AD 1100 this placid forest setting was home to violent death and a mystery that has remained unsolved for over 900 years.

The memorial commemorates the traditional location where William II, son of William the Conqueror, died in a hunting accident. But was it an accident, or was it cold-blooded murder?

The New Forest was a royal hunting ground established by William the Conqueror. When William died the crown was inherited by his son William, known as Rufus for his red hair and ruddy complexion. William Rufus was an unpopular king, and he alienated many of his leading nobles. He treated his subjects with disdain, and the residents of the New Forest area must have hated and feared him.

William had two brothers, Robert of Normandy, who inherited their father's French estates, and Henry, who inherited precisely nothing. Disaffected nobles who fell out with King William gathered around the king's brothers, though there was no open rebellion.

On 2 August 1100, the king and a party of nobles were hunting boar and deer in the forest. What happened next has been the subject of debate and speculation amongst historians for centuries. In the course of the hunting the king became separated from most of his retinue and found himself alone with Sir Walter Tyrrell, or Tyrrel.

They spied a stag, and Tyrrell, by all accounts the best archer in the king's party, drew his bow and fired an arrow. The arrow deflected off a tree trunk and struck the king, who was rushing forward. It entered his chest and lodged in his lung, killing him instantly. 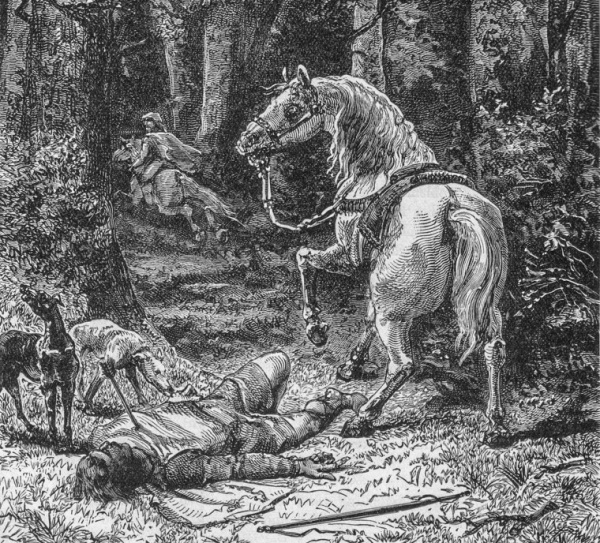 Tyrrell's actions when the king fell add to the mystery. As soon as it was apparent that the king was dead, Tyrrell fled the scene, riding as hard as he could for the safety of France. Was he simply afraid of being charged with the king's death, or did he have a guilty conscience?

According to legend, he paused by a pond at nearby Castle Malwood to wash the king's blood from his hands, and every year on the anniversary of the death the pond turns crimson. Another old story says that Tyrrell stopped at a smithy and had the blacksmith shoe his horse with backwards-facing horseshoes so as to confuse pursuers.

But there were no pursuers.

The king had been so unpopular that no one seems to have been particularly bothered about his death. It seems that the royal servants did not even care to deal with the corpse. A local charcoal burner named Purkiss loaded the king's lifeless body into his cart and carried it to Winchester Cathedral. He was buried quietly, with little ceremony and no grieving just 3 days later. His bones are thought to be kept in a mortuary chest above the cathedral choir.

If the king's household was slow to act, his brother Henry was not. Henry rode hard for Winchester and proclaimed himself king as Henry I. By rights the crown should have gone to Robert of Normandy, but once Henry had seized the royal treasury and had himself crowned, Robert stood no chance. The leading nobles threw their support behind Henry. The two brothers inevitably fought, but Henry emerged victorious. 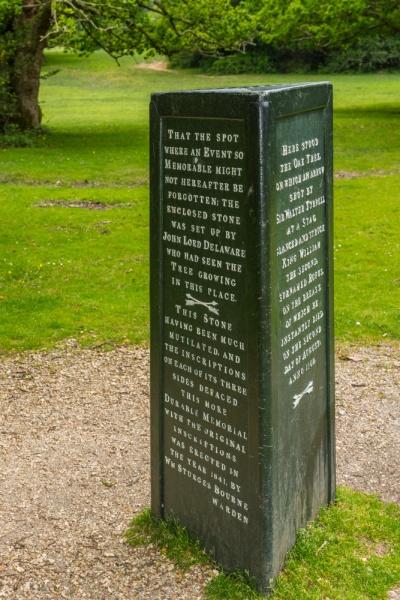 So far we've dealt with solid history and tradition, but there is one question that has puzzled historians; where did the king's fatal hunting accident take place? For years the site near Canterton, west of Cadnam, was cited as the most likely place, and that is where the Rufus Stone was erected in 1841. But in recent years historians have thrown doubt upon the location, and suggest that the king may have died near Beaulieu Abbey, well to the south.

The Rufus Stone was erected by William Sturgess Bourne, Warden, but it replaced an earlier stone put up by John Lord Delaware in 1745. It is a very simple monument, a slender pillar with three sides. Despite its name, it is not a stone, but is made of cast iron. We can only assume that the original 18th century Rufus Stone was indeed made of stone that deteriorated so badly it had to be replaced, and sensibly the replacement was made of more durable iron.

All three of the sides are inscribed, as follows:

Here stood the oak tree, on which an arrow shot by Sir Walter Tyrrell at a stag, glanced and struck King William the Second, surnamed Rufus, on the breast, of which he instantly died, on the second day of August, anno 1100.

King William the Second, surnamed Rufus being slain, as before related, was laid in a cart, belonging to one Purkis, and drawn from hence, to Winchester, and buried in the Cathedral Church of that city.

That the spot where an event so memorable might not hereafter be forgotten, the enclosed stone was set up by John Lord Delaware who had seen the tree growing in this place. This stone having been much mutilated, and the inscriptions on each of its three sides defaced. This more durable memorial with the original inscriptions was erected in the year 1841, by WM Sturges Bourne, Warden.

The inscription leaves a few questions unanswered. How did Lord Delaware determine the right spot for the original Rufus Stone? Why was the original stone in such poor condition after less than a century?

An old legend says that when William's corpse was carried to Winchester it left a trail of blood on the forest floor, and every year on the anniversary of his death the king's ghost returns to follow the bloody trail.

Though it is a New Forest landmark, it isn't as easy as it should be to find the Rufus Stone. The easiest way is from the south, off the A31, but beware; you have to be in the eastbound lane, travelling towards Cadnam. There is no exit from the westbound lane. From the north, you can follow the small lane opposite the Bell Inn in the village of Brook. Simply follow the lane south until you pass the Sir Walter Tyrrell pub on your left, and the Rufus Stone parking area is immediately around the next bend in the road.

There is a large parking area on the left, and the Rufus Stone is across the road, easily visible from the parking lot. It will not take long to view the Stone, but if you'd like to enjoy this beautiful area of the National Park there are a number of easy footpaths leading into the woods. And of course there's the pub, always a popular stop for walkers. 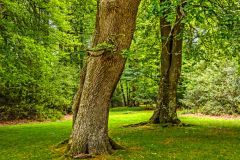 More self catering near Rufus Stone