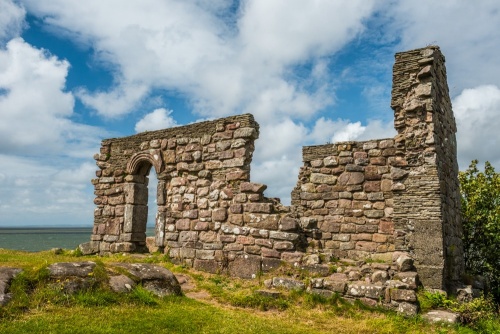 Sometime in the middle of the 8th century, a small rectangular chapel was built on a headland at what is now Heysham, Lancashire. A long-standing local tradition says that three centuries earlier in the 5th century, St Patrick was shipwrecked off Heysham and came ashore on the headland where he founded a small chapel. The 8th-century chapel was established at least 200 years later to establish Heysham as a destination for pilgrims.

The roofless remains of the 8th-century chapel show a small building roughly 7m x 2.2m (23 feet x 7 feet). The east wall still stands to the gable height of about 5.5m (18ft). By contrast, the west wall has completely disappeared. The chapel was built of reddish sandstone and features a well-preserved Anglo-Saxon doorway.

When we think of a chapel we think of a place to worship, but historians think that St Patrick's Chapel would have been too small for people to gather inside for services. Instead, they probably gathered outside the chapel by a large wooden cross. 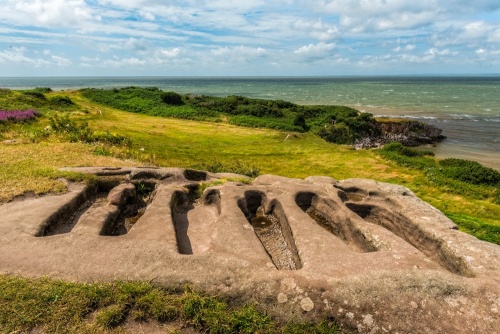 Rock-cut graves on the clifftop

A few steps away from the chapel wall you can see a large socket cut into a large rock embedded in the ground. This probably acted to support the preaching cross.

Investigation inside the chapel revealed traces of plaster and paint, suggesting that the chapel was founded by a wealthy patron.

The 8th-century chapel was rebuilt and enlarged in the 10th century, at a time when the popularity of St Patrick was on the rise. The walled enclosure surrounding the chapel became a burial ground, and the remains of over 80 people have been discovered here, spanning the 10th and 11th centuries. The bones of 10 people were found inside the chapel itself.

St Patrick's Chapel is thought to have been abandoned in the 12th century and possibly as early as the middle of the 11th century. It may have declined in importance as the neighbouring parish church of St Peter became established. 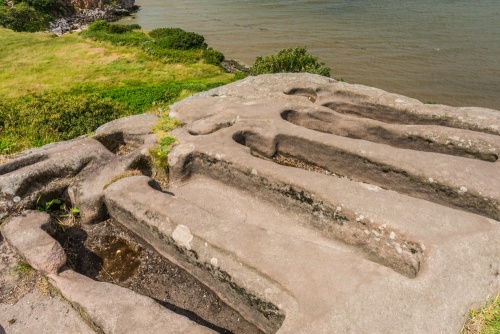 Another look at the rock-cut graves

A few steps away from the chapel on the edge of the cliffs are a series of eight graves carved out of a rocky outcrop. Six of the graves are carved into a single outcrop of rock while a short distance away is a grouping of two similar rock-cut graves in a more sheltered location back from the cliff edge. Some of the graves are just elongated rectangles but others are carved in human shape with a distinct space for a head and a tapering body.

Several of the graves have carved sockets at the head end that probably supported stone crosses. These graves were probably added to the chapel site in the 11th century and would have held the bones of very important people. 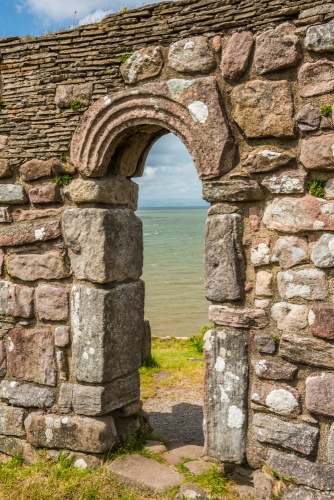 The shallow rock-cut depressions probably held disarticulated bones rather than complete skeletons, so in that sense, they were more like reliquaries rather than traditional stone coffins.

They may have been created to hold the bones of early Christian saints, including those of St Patrick himself. It is not such a farfetched theory as it might at first seem, given Patrick's close links to the region, however, most traditions suggest that St Patrick was buried at Downpatrick in County Down.

There are really two highlights to visiting St Patrick's Chapel. One is the Anglo-Saxon chapel doorway, with its rounded arch cut from a single piece of rock. The arch is decorated with three moulded grooves and ridges. The noticeable thing is how narrow the doorway is. 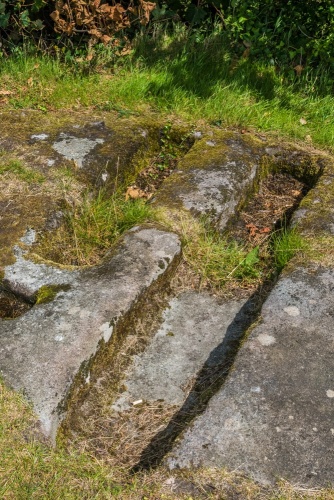 The other major highlight is the set of rock-cut graves on the cliff edge. The graves are incredibly picturesque and

St Patrick's Chapel is part of the National Trust's Heysham Coast estate taking in the headland and a stretch of coastline south to the edge of Half Moon Bay. A footpath leads along the clifftop, offering wonderful views over Morecambe Bay and Heysham Sands.

The chapel and the rock-cut graves are all listed Grade I - the highest possible designation - for their historical importance. 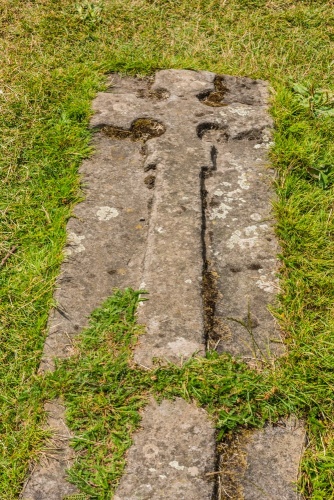 A floriated cross grave slab set into the ground

Heysham is on the A589 immediately south of Morecambe. There is a large village car park on Smithy Lane, at the southern end of the village. From the car park, you can follow the cliff to path north, or walk up Barrows Lane, past the local heritage centre, and turn left up Main Street. Turn left again at the churchyard and you will come to the chapel just beyond the western end of the churchyard wall. 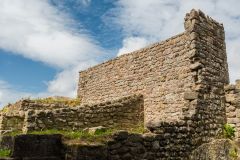 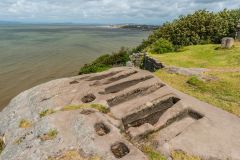 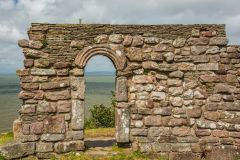 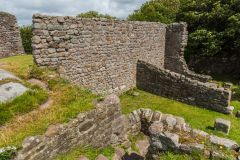 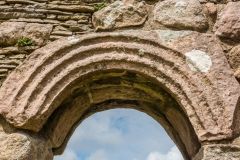