Whatton House is a late Georgian mansion, built in 1802 by Edward Dawson. In the 1870s the Dawson family moved to Launde Abbey and sold the house to Lord Crawshaw. The house suffered a devastating fire shortly afterwards and was rebuilt in 1876 to give us the building we see today.

The house was used as a maternity hospital during WWII, with many of the mothers having been evacuated from London. In February 1941, 30 incendiary bombs fell in the Whatton House grounds but thankfully no one was injured.

The house is still a family home, and rarely open to the public, but the wonderful gardens surrounding the house are open to visitors from spring through autumn. Though parts of the original 1802 gardens remain, much of what we see today was laid out in the late 19th century by the wife of the first Lord Crawshaw. She designed the 15 acres of mixed woodland and garden areas, with trails leading through shaded trees and little dells.

The gardens are a delightfully peaceful place, full of interest throughout the year. In spring the woodlands are covered in a carpet of wildflowers interspersed with bulbs. Ornamental trees and flowering shrubs add interest to large areas of lawn.

The old fashioned formal rose garden is at its best in the summer months, as is the long herbaceous border, which backs onto a brick wall erected to protect the kitchen garden.

The kitchen garden was laid out in 1802 when the house was built. Within the kitchen garden are several original Victorian glasshouses. This is still a working garden, producing plants for use by the household and in the garden cafe. 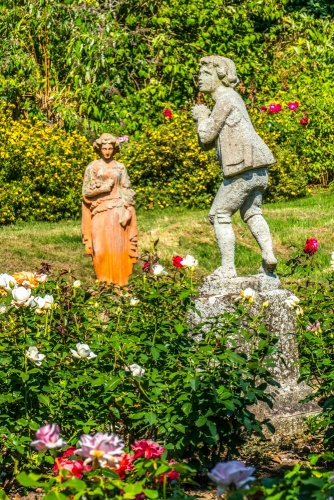 One of the most interesting areas of the gardens is the Chinese Garden, dotted with several eye-catching copies of the famous Chinese Terracotta Army figures. Near the Chinese Garden is a very Italian loggia, adding a Renaissance flavour, while a 19th-century summer house made of bark creates a whimsical touch.

The gardens include the original 1802 walled garden, which was undamaged by the fire. Other original features include a large number of mature trees in the garden and the surrounding parkland. Many of these trees are now more than 200 years old.

Broad gravel paths bisect the garden and are overlooked by specimen trees. The trees provide shelter for the formal rose garden, laid out in 1898. The garden is quartered by paths, with terracotta statues in each corner. From this area of the garden, you get wonderful views towards Charnwood Forest. 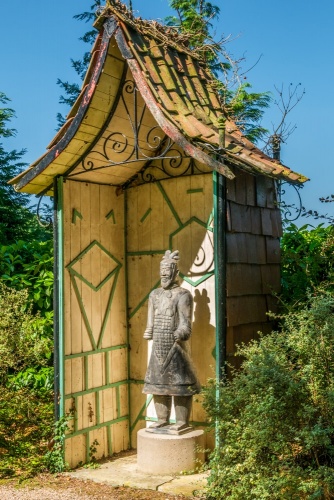 The Broad Walk through the garden terminates in the 'Bogey Hole', a former icehouse that was converted into a picturesque grotto with decorative rockery features. The creation of Bogey Hole dates to at least 1831 when the decorative rockwork was mentioned in an article in Gardener's Magazine.

The Bogey Hole is at the eastern edge of the Chinese Garden, which runs along the northern edge of the pleasure grounds. This garden dates to the late 19th century (with the terracotta warrior figures added later).

The loggia stands against the west wall of the kitchen garden. The decorative loggia holds a belvedere seat for enjoying the shaded location. Next to the loggia is the Dutch Garden, a small, enclosed area. south of the Chinese Garden is a large arboretum. Many of the trees here were planted in the early 19th century when the house was built, but many more date to after WWII. at the western edge of the garden is an ornamental pond, created in the 1930s. 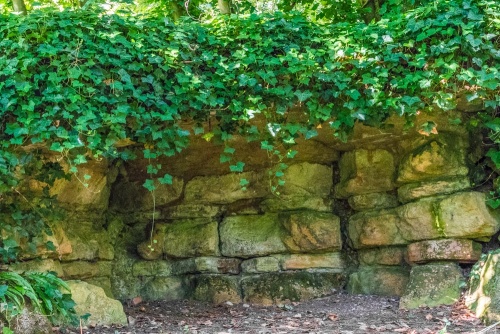 Whatton House Gardens are a delight, a beautiful place to meander or simply to sit and relax. The mix of formal and informal garden areas really make this a garden to savour at slow speed.

The Chinese Garden is outstanding, but what really makes the garden work are the little, whimsical touches like the Bogey Hole, scatted statues to act as focal points, and architectural features like a small wooden footbridge and a peacock statue peering out of the shrubbery. 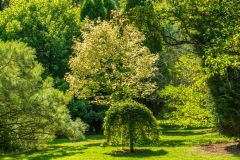 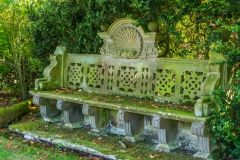 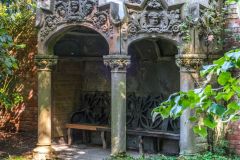