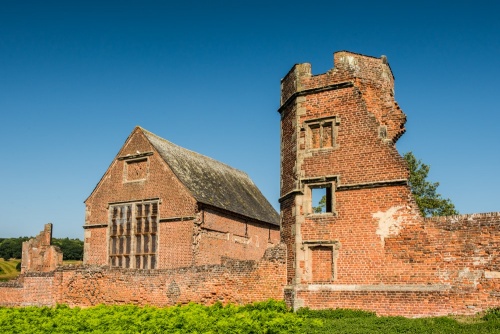 Bradgate House is one of England's great 'lost country houses', a once-magnificent Tudor mansion and the birthplace of Lady Jane Grey, the tragic 'Nine Days Queen'.

The story of Bradgate House goes back long before Lady Jane's birth, however, and is intertwined with the history of Bradgate Park, a large country park in which the ruins stand. Bradgate Park began as a hunting ground in the early 13th century. It was enclosed by an earthwork bank and ditch, topped by oak timbers.

In 1445 the park passed by marriage to the Grey family, who owned it for the next 5 centuries. The first grey owner was Edward Grey, whose son John married Elizabeth Woodville. After John's death at the Battle of St Albans in 1461 Elizabeth married King Edward IV. One of Elizabeth's sons by her first marriage was Sir Thomas Grey, the 1st Marquess of Dorset.

Sometime after 1490, Sir Thomas prepared the land to build an impressive house in the former medieval deer park. He intended his new house to replace the old Grey house at Groby. Unfortunately, he died in 1501 before the project could begin and it was left to his son Thomas Grey, the 2nd Marquess, to build Bradgate House. The house was finished sometime around 1520. 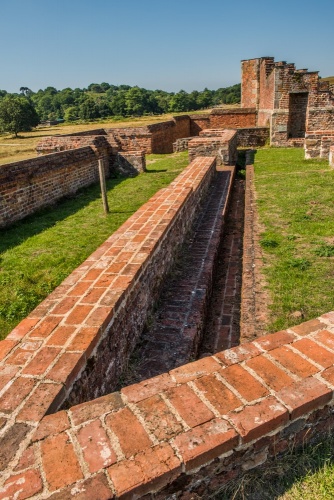 It was built in red brick, now a ubiquitous building material, but in the early Tudor period red brick was an expensive material and rarely used for large buildings. The fact that Bradgate House was built in brick is a clear sign that Grey was trying to make a statement of his wealth and prestige. another very early use of brick is also in Leicestershire at Kirby Muxloe Castle.

It is also one of the earliest unfortified manor houses in England, a testament to the relatively peaceful interlude following the end of the Wars of the Roses.

Bradgate House was meant to impress. The main house block stood two storeys high, with attics, and stretched 200 feet in length on an east/west axis. Two wings adjoined the central block, creating a U-shaped layout. The main block is on the north side of the 'U' and held a great hall and parlour. The projecting wings partially enclosed an irregular courtyard.

In the east wing were private apartments and a family chapel. The chapel is the only part of the house to retain its roof. The west wing held service rooms such as a kitchen and bakery. You can still see the large ovens and fireplace in the ruins of the bakery. Three towers rise above the west wing. Two at the angles of the wing are polygonal in plan, while partway along the wall is a rectangular tower. 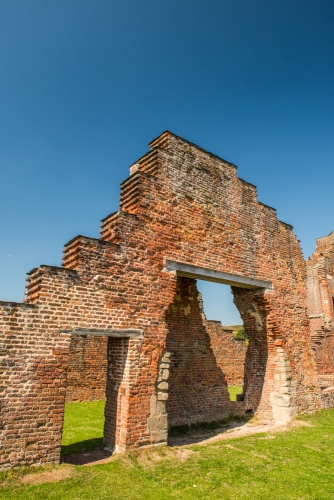 East of the main building is a formal garden area known as the tiltyard (though there is no evidence it was actually used for tilting). This area is sunken into the ground about 2m deep and is contained by brick walls.

The garden area is roughly 90m x 75m and is split into four sections by walkways. Outside the garden is a leat, or water channel, which runs in a southerly direction to the site of the watermill. The leat runs out of a fishpond, now dry.

On the south side of the house site is a garden wall of red brick, added in the early 16th century.

Sir Thomas Grey died in 1530 and was succeeded by his son Henry, the 3rd Marquess of Dorset, who was married to Frances, the daughter of the Duke of Suffolk. The couple's daughter Jane was born at Bradgate House 12 October 1537. That same month Henry VIII's third wife, Jane Seymour, gave birth to a son. The Grey's, always ambitious, hoped to marry their daughter to Prince Edward, the new heir to the throne, even though the two infants were cousins.

Lady Jane Grey spent her childhood at Bradgate where she developed a reputation for scholarship. Unlike the rest of her family who enjoyed outdoor sports such as hunting, Jane preferred the company of a good book. 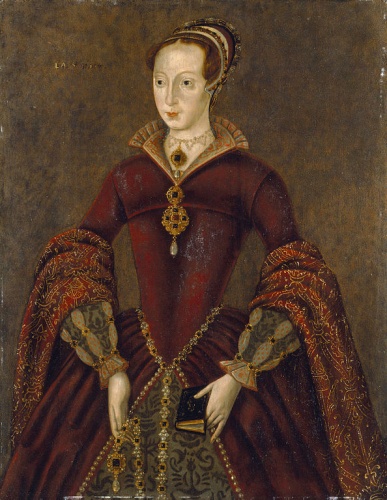 Jane's relatives had other plans for her. One relative was John Dudley, the Duke of Northumberland. Dudley realised that Edward, now reigning as Edward VI, was sickly and unlikely to live long. He and Jane's parents forced her to accept marriage to John Dudley's son Guildford. On his deathbed, King Edward named Jane as his heir.

On 10 July 1554 Lady Jane Grey was crowned as Queen of England. It was a bold move, but one fated to fail, for the Duke of Northumberland had little support and when Henry VIII's eldest daughter Mary gathered an army and marched on London, Lady Jane's reign of nine days collapsed. All the major conspirators were executed, including Lady Jane and her husband Guildford Dudley.

The Greys suffered through the long reign of Elizabeth I, but when James I and VI came to the throne he restored the family estates. Henry Grey, the son of Lady Jane's uncle John, was named the first Baron Grey of Groby. A later Grey married into the family of the powerful William Cecil of Burghley House and was created the 1st Earl of Stamford.

In 1634 King Charles I and Queen Henrietta Maria visited Bradgate House where they were hosted by the 2nd Baron Grey of Groby. Baron Grey was not swayed by his royal connections when the Civil War broke out 8 years later, and the Grey family were prominent supporters of the Parliamentary cause throughout the Civil War. That made Bradgate house a target for Royalists. The house was attacked but not seriously damaged, and the defenders were able to repel the royalist soldiers. 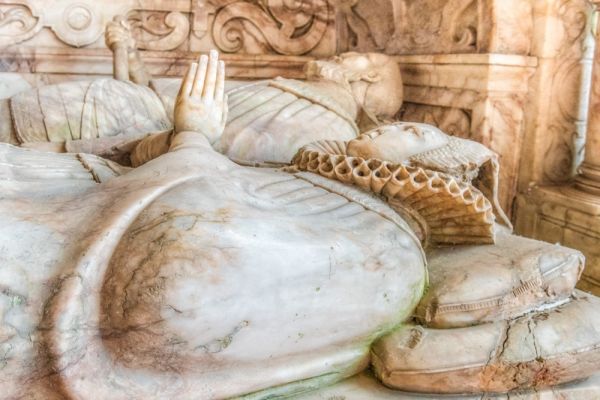 Lady Anne and Lord Henry Grey effigies in the chapel

Thomas Grey, the 2nd Earl of Stamford, married an heiress named Elizabeth Hervey. Lady Elizabeth was miserable at Bradgate House and complained to her sister about being stuck out in the countryside in the middle of Charnwood Forest.

According to legend, her sister replied, saying she should set fire to the house and make her escape in the confusion. Lo and behold, a fire did break out in 1694 and seriously damaged the north-west tower. Was it a coincidence that the Earl slept in private apartments in that tower?

Lady Elizabeth was suspected of starting the fire, but the suspicion was never proven. The couple eventually divorced, and the Earl remarried. In any event, the house was repaired in time to welcome a royal visit by William III and Queen Mary II in 1696.

To welcome the monarchs the Earl built new stables to accommodate 100 horses. He also added a bay window to the great hall and widened the bridge on the road from Anstey village so that it was wide enough to allow the royal coach to pass.

The Earl must have hoped that his efforts to please the monarchs would gain him royal favour, and perhaps the award of a high office, but if so, he was disappointed, and no appointments were forthcoming. The cost of the renovations put the Earl deeply in debt. 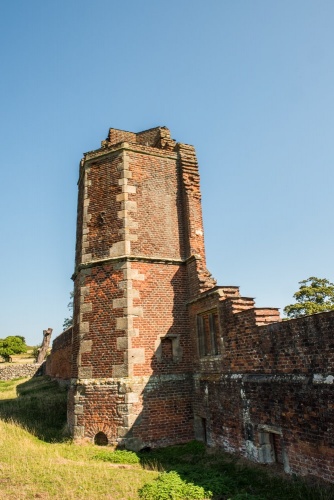 One of the polygonal mural towers

When the 4th Earl of Stamford inherited the title in 1739 he moved the family seat to Enville Hall in Staffordshire. Bradgate House was abandoned and left to decay. Local people took stones from the house to use for other building projects. If you explore nearby villages you will many cottages made with bricks stolen from Bradgate House. By 1790 it was reported as ruinous.

Today this once-imposing manor stands roofless, except for the chapel. Inside the chapel is a superb alabaster memorial to Sir Henry Grey and his wife, erected in 1614. The chapel also houses an exhibition on the history of Bradgate House and the people who lived there. There are displays of archaeological finds on the site.

The manor site includes the remains of a formal garden area, while outside the manor walls you can see the remains of an old water mill and the leat channel that fed the mill. 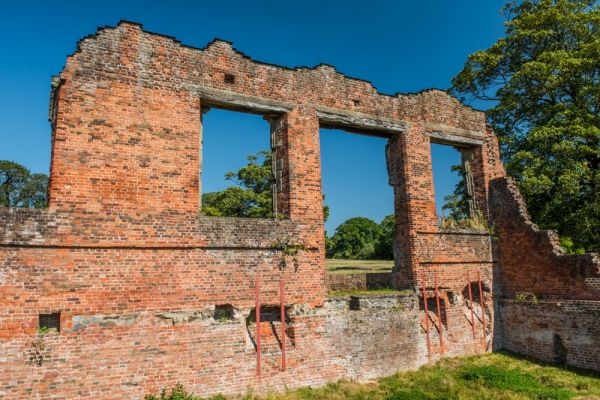 Ruins of the Tudor great hall

Bradgate House is protected by a high brick wall and fence. It is normally closed to visitors, though you can get quite a good look at the ruins over the fence in several places. Even better, the house is open to the public on specified 'Open Days' throughout the year. On these days you can get a guided tour of the site by a guide from the nearby park visitor centre.

We were lucky enough to take one of these tours and found it exceptional. The guide was entertaining and very knowledgeable. She was able to open the chapel and let us explore the interior as well as taking us around the house ruins and pointing out all the architectural and historical features. I can highly recommend taking the tour.

The easiest way to reach Bradgate House is to park at the main parking area in Newtown Linford, just off the minor road from Anstey. From there simply follow the signposted trail east along the bottom of the park. This will take you directly to the ruins of Bradgate House, a distance of 3/4 mile.

If you carry on past Bradgate House for another five minutes you will reach the visitor centre where you can learn about the history of the Park and the house. Here you can make bookings for a guided tour of the House. When we visited we only had to wait 15 minutes for a tour, which lasted about 45 minutes. 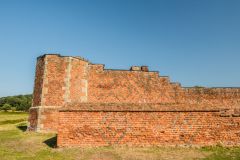 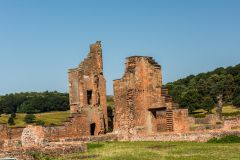 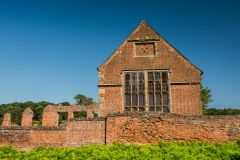 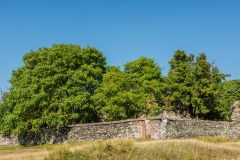 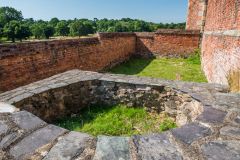 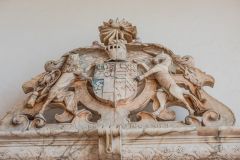 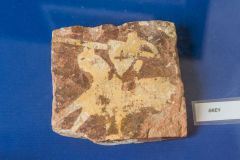 More self catering near Bradgate House