HERITAGE HIGHLIGHTS:   One of the few surviving copies of the Magna Carta is on display 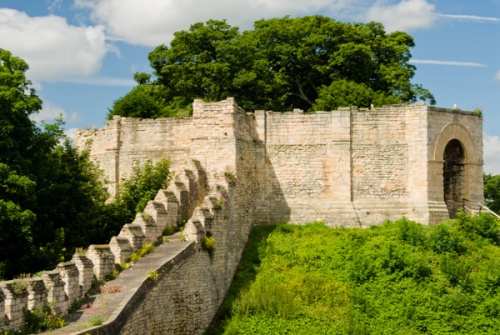 The Lucy Tower at Lincoln Castle

Lincoln Castle was begun by order of William the Conqueror in 1068, just two years after his arrival in England. This earliest castle was a very simple affair, probably consisting of a mound, or motte, topped by a palisade. Beyond the motte was an enclosure known as the 'bailey', a name that lives on in the current Bail. The current castle encompasses the inner bailey, while the outer bailey stretched around the entire medieval city.

The office of castle constable was held by Robert de la Haye, and his ancestors held that post for over a century. In the early 12th century the castle assumed its current shape, with a curtain wall surrounding an inner bailey, and gates at the east and west.

The original wooden 'castle' on the motte was rebuilt in stone in 1136. This stone tower is named the Lucy Tower, after Lucy de Tailebois, Sheriff of Lincoln, who in 1110 built a roughly circular stronghold for herself and her retainers. 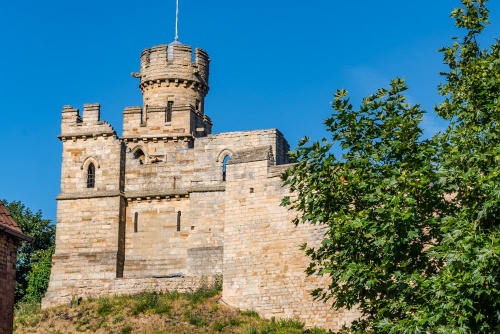 The castle was seized by Lucy's son, Ranulf, during the Civil War between Stephen and Maud, and held against King Stephen. The king's army besieged the castle, with archers firing from the west front of the cathedral. The king's army was in turn attacked by a force under Earl Robert of Gloucester, and the king captured. See The Joust of Lincoln for more details.

The castle saw further conflict in 1216-17 when French troops supporting the baron's revolt against King John took the castle. They were overwhelmed by an army under William Marshall, and the city was punished heavily for its support of the rebels. See The Battle of Lincoln Fair for more details.

Following the battle, a new tower, Cobb Hall, was added to the castle. Cobb Hall housed dungeons for holding prisoners and offered a platform for large weaponry from its flat roof.

The most easily recognisable tower, however, is the so-called Observatory Tower. The tower was begun in the 14th century, then extended in 1822 by the prison governor, a man named John Merryweather. Merryweather's ostensible reason for erecting the tower was that it could act as a watchtower to prevent escapes from the castle prison. The reality seems to be that Merryweather was a keen astronomer, and he wanted a good observation tower for his star-gazing activities. 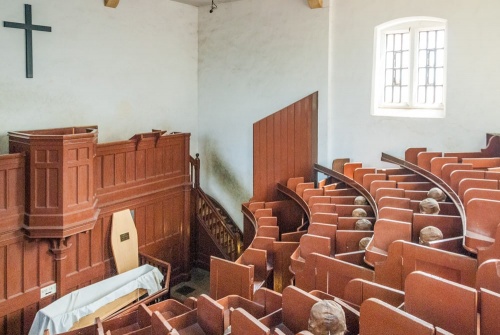 After the medieval period, the castle ceased to have a defensive function and was used primarily as a prison. Visitors can tour the old prison buildings and view the cells. The most famous room in the prison is the chapel, where the benches rise up steeply above the altar in a semi-circle somewhat reminiscent of a Greek theatre.

The benches are divided into narrow seats with high barriers between them. The barriers are arranged so that prisoners could see and hear the service at the altar, but could not see any of the other prisoners.

One of the treasures of Lincoln Castle is an original copy of the Magna Carta, one of only four in existence. Its presence here is probably due to the fact that Bishop Hugh of Lincoln was present at Runnymede, and he presumably carried a copy back to Lincoln with him.

Within the castle are sections of an octagonal Roman fountain, unearthed at 292-3 High Street. Also within the castle grounds is a section of an Eleanor Cross. When Queen Eleanor, wife of Edward I, died near Lincoln in 1290, her body was carried back to London for burial (minus her entrails, which were entombed at Lincoln Cathedral, and her heart, which was buried at Blackfriars in Lincoln).

At every place that the procession carrying the dead queen's body stopped for the night, the grieving king erected a memorial cross, called 'Eleanor Crosses'. Only three of the crosses remain, plus this small section of a fourth, located near the castle entrance. 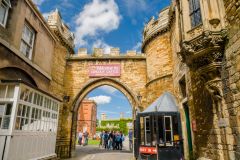 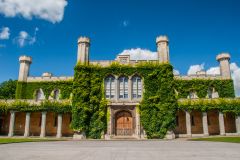 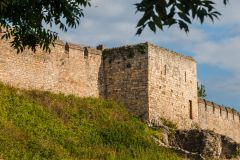 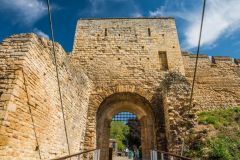 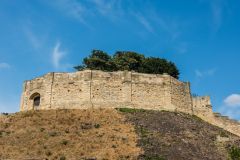 More self catering near Lincoln Castle