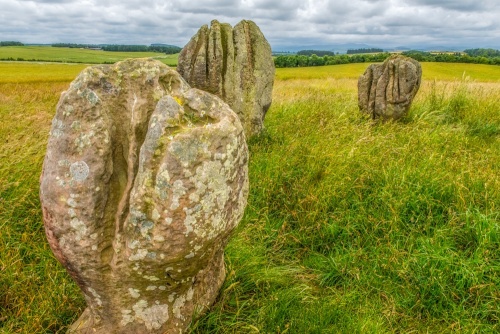 Duddo Stone Circle (sometimes known as the Duddo Five Stones) is a small, atmospheric stone circle north of the village of Duddo, Northumberland.

Local archaeologist Roger Miket describes the Duddo monument as 'the most complete and dramatically situated in Northumberland'. High praise indeed.

The location is part of what makes the Duddo Stone Circle so enjoyable to visit. The grouping of stones stands at the crest of a low rise in the middle of farm fields, with outstanding views over the surrounding countryside to the Cheviot Hills and as far as the Eildon Hills across the border in Scotland if the day is clear.

To reach the stone circle you have to follow a farm track up the hill, along a field boundary. The track can be muddy and in summer the path is sometimes overgrown with grass, making it a real experience just getting to the circle. Thankfully, the stones are worth the effort! 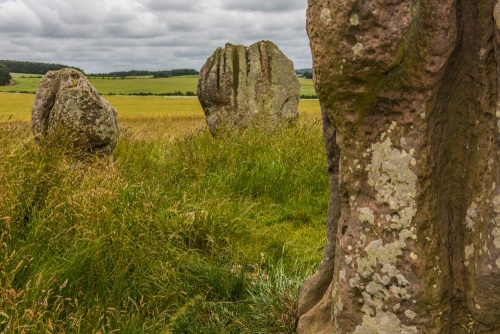 Looking across the stone circle

The five stones are all composed of soft local sandstone and show long vertical grooves from millennia exposed to the weather. The grooves may relate to the stone circle's other nickname, The Singing Stones.

You can also several sizeable depressions on some of the stones. These have been interpreted as cup marks, though they might just as easily be due to weathering.

According to local records, there were once six stones, and you can clearly see a gap in the circle where the sixth stone once stood. When the site was investigated in the 19th century only four stones stood, which explains why the site was once known as Duddo Four Stones. However, one of the missing stones was later discovered nearby, still intact, and was reinserted in the circle. The sixth stone has never been found. 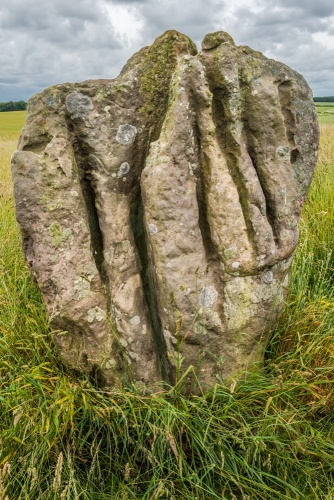 An archaeological investigation in the 1890s unearthed a pit in the centre of the circle roughly six to eight feet in diameter. The pit showed evidence of charred bone and charcoal, suggesting that the site was used for cremations. A later investigation in 1923 found a fragment of pottery, perhaps a cremation vessel.

Here we enter the realm of speculation. The stone circle is probably at least 4,200 years old, putting it in the early Bronze Age, though it may date even earlier to the Neolithic period. We simply don't know.

At the eastern edge of Duddo on the B5364 you will see a sign on a farm gate on the north side of the road. Park on the grass verge, leaving room for farm vehicles.

Follow the signposted footpath straight north about 1km (0.6mile) through two fields and you will see the stone circle on your left. This is a permissive footpath, so please keep to the trail and take care of farm crops.