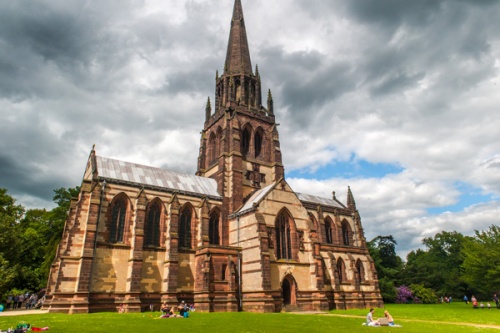 Within the confines of the National Trust's Clumber Park estate stands one of England's great private chapels of the Victorian era, the Chapel of St Mary the Virgin. The chapel was built for the 7th Duke of Newcastle from 1886-89 and is one of the finest works of the Gothic Revival architect GF Bodley.

To call St Mary's a chapel may give the wrong impression, for it is easily the size and scale of a large parish church.

There was a chapel attached to the Clumber Park mansion as early as 1826, where services were held for the family, guests, and servants, creating a congregation of roughly 100 people. The 6th Duke of Newcastle decided to create an independent building to serve as a new chapel. 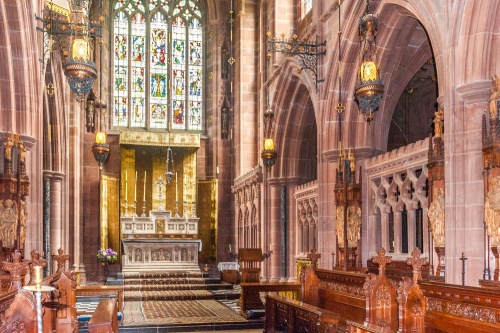 The chapel, dedicated to the Blessed Trinity, was designed by architect TC Hine of Nottingham. It was never completed because the family fell into bankruptcy in 1869. The estate passed to Henry Pelham Archibald Douglas Pelham-Clinton, who inherited the title of 7th Duke of Newcastle under Lyne.

At the time of his inheritance, Pelham-Clinton was studying at Magdalen College, Oxford and intended to enter the church. He was heavily influenced by the Anglo-Catholic Movement and determined to begin a new family chapel to express his religious beliefs. The exterior was clad in white Steetly stone accented with reddish Runcorn sandstone.

The Duke called in the firm of Bodley and Garner, headed by George Frederick Bodley, one of the foremost ecclesiastical architects in Victorian Britain, a former colleague of William Morris and a man whose designs heavily influenced the Arts and Crafts Movement. 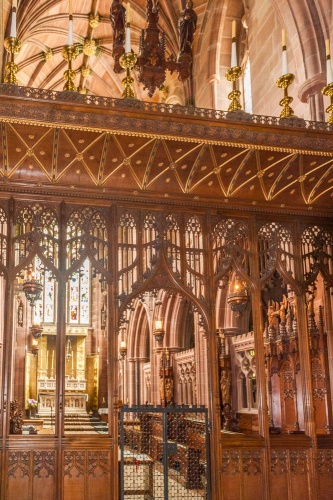 The ornate chancel screen by Bodley

The Duke's vision was to create a cathedral in miniature, a High Church building in 14th-century Decorated Gothic style. The most obvious reference to the 14th century is the striking spire, modelled on the one at St Patrick's Church in Patrington, Yorkshire, built over the years 1310-1420. At Clumber, Bodley built a tower and spire rising to 180 feet above the ground. The internal footprint of the chapel is cruciform, with a chancel and nave of four bays each and the Lady Chapel and vestry of three bays.

The foundation stone was laid by the Bishop of Southwell in 1886 and the Bishop officially opened the chapel on 22 October 1889 in the presence of the Bishop of Lincoln. In an amusing note, the house party was delayed arriving at the chapel due to a sudden storm, to the consternation of the village blacksmith, who had the job of pumping the organ bellows throughout the entire service.

The chapel took 3 years to complete because the Duke insisted on releasing funds gradually in an effort to keep the estimated £40,000 cost under control. GF Bodley found to his own cost just how important managing the budget was to the Duke; he spent money on parts of the project without consulting the Duke and was dismissed from the project. 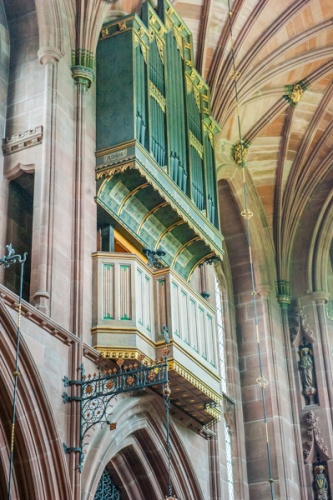 The vicar of Worksop Priory Church complained to the Duke that another church so near his own would affect his parish income from alms. He suggested a solution: all alms collected during the chapel's opening ceremony should go to his own church. The Duke flatly rejected the proposal.

One feature was added to the chapel by its first rector, Rev Ernest Geldart. He installed copper and wrought iron oil lamps with translucent shades over the choir stalls. These lamps were created by blacksmiths on the local estate village of Hardwick.

The lamps were the only means of lighting the chapel interior aside from natural light passing through richly-coloured stained glass, much of it provided by the famous designer CE Kempe.

The lighting was modernised - somewhat - in 1906. When electric power was installed in Clumber House the lines were extended to provide lights in the chapel vestry.

After the 7th Duke died in 1928 the chapel ceased being used on a regular basis and it was made redundant in 1936 when Clumber House was pulled down. 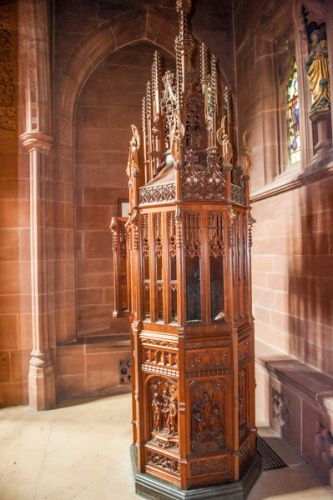 The octagonal font and cedar casing

Made of white alabaster, the altar is raised on a dais of 5 steps. The front face is carved with a relief depicting a Nativity scene. The top of the altar is made of Frosterley marble. Over the altar is a painted and gilded gradine (shelf) with a Flemish-style tabernacle with a decorated brass door.

South of the high altar is a triple sedilia (clergy seat) of red sandstone topped by a pair of angels bearing the instruments of the Passion. Between the altar and the chancel screen is a richly-coloured carpet made by Watts & Co., the firm founded by GF Bodley to create church fittings after he ceased his partnership with William Morris.

Another example of the superb woodwork inside Clumber Chapel, the choir stalls to the west date to 1890 (those to the east are 30 years younger) and are carved from a mix of cedar and maple in Gothic Revival style. Beautifully carved statues abound in the chancel. Over the choir stalls are limewood statues of angels, 12 on each side. Each pair of angels carry a scroll with a Latin inscription.

A further 16 angel carvings stand on crocketed canopies, each bearing a musical instrument. The chancel screen, designed by Bodley, is made of oak topped by an elaborate cornice. On the cornice stand 6 candlesticks illuminating a rood suspended from the chancel arch. The screen gates are made of elegant wrought iron. 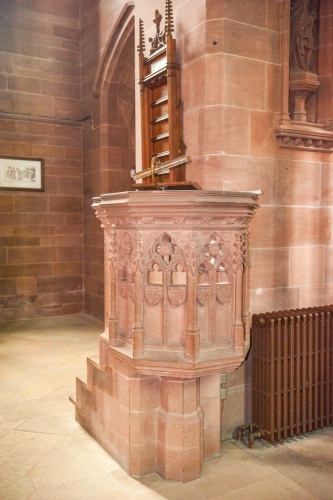 The pulpit, by Bodley

Other highlights include the octagonal font in the baptistry, encased in 8 cedar panels under a cover designed by Rev Geldart. The stone pulpit is attached to a buttress on the north side of the chancel screen. It was given by the people of Worksop and was designed by Bodley. In the north transept is a confessional box in Gothic style.

Attached to the walls and furniture are sconces installed when candles and oil lamps were the only means of lighting the chapel interior. Bodley also designed a series of chandeliers in Flemish style.

Those are just a few highlights of this remarkable Victorian building. Clumber Chapel is without doubt one of the most interesting architectural adventures of Gothic Revival, and an excellent example of the work of GF Bodley, one of 19th-century Britain's most influential architects. The chapel was one of Bodley's personal favourites amongst his designs.

The chapel is still an active place of worship and, as of this writing, is open from March-January. It is easy to reach from the main National Trust parking area in Clumber Park. 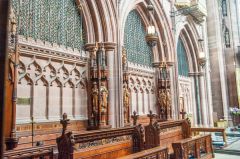 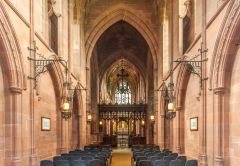 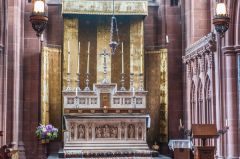 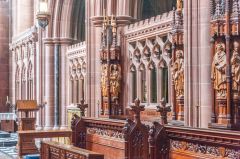 More self catering near Clumber Chapel