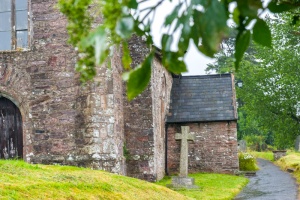 The churchyard path to the
south porch entrance

The village of Molland lies near the southern boundary of Exmoor National Park, about five miles east of South Molton. Above the village the land rises to form Molland Common and joins the heather moorland of Exmoor.

The medieval church of St Mary stands on the hill, overlooking a picture-postcard village. The church is entirely 15th-16th century, replacing an earlier church of which nothing remains but the Norman font and a pair of medieval bells.

The interior was refurbished in the 18th century, and thankfully passed over by Victorian restorers, so that it remains a beautiful example of a rustic Georgian church, with whitewashed walls, box pews, and a three-decker pulpit surmounted by a canopy. Another 18th-century feature is the finely carved altar rails, installed around 1700.

The nave is separated from the chancel by an 18th century screen featuring folding gates and topped by a plastered tympanum which completely fills the space up to the chancel arch. The tympanum is in the form of a triptych of wooden panels. The centre panel is a royal coat of arms to George III, dated 1808. On either side are panels inscribed with the Ten Commandments. 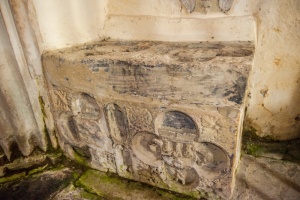 There are an exceptional series of 17th and 18th-century monuments to the Courtenay family, lords of the manor of West Molland. The most intriguing Courtenay monument is a 'heart box', a stone receptacle for the hearts of Courtenay family members.

Heart boxes were usually used for deaths abroad, when it would have been expensive to bring an entire body back to Britain for burial. The Molland heart-box is embellished with quatrefoils and heraldic shields. It seems uncertain which Courtenay hearts are contained within the heart-box.

The north aisle has suffered over the years, and the arcade pillars lean precariously into the aisle, supported by timber buttresses. In the aisle is a monument to "the Right Worshipful John Courtenay", who died in 1660.

On the north wall of the chancel is an elaborate mural monument to Rev. Daniel Berry (d. 1654), erected in 1684 by his son, Admiral Sir John Berry, who was born at nearby Knowstone.

At the west end of the church is a beautifully carved wooden panel, originally part of a reredos behind the high altar. It appears to have been made out of pieces of old bench ends pieced together. The style of carving suggests a 15th or 16th-century date. It is probably the only piece of pre-1740 woodwork in the church.

In the graveyard is a very moving memorial to 8 members of the Pincombe family who died in a shipwreck in 1855 just hours after sailing from Plymouth to begin a new life in Canada.

St Mary's is a delightful church in a beautiful Devon village, well worth a visit. The church was open when we visited and as far as we can tell it is usually open to visitors during daylight hours. 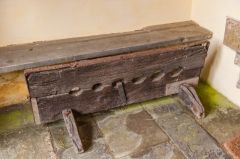 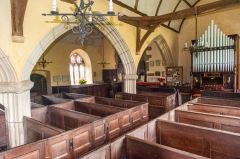 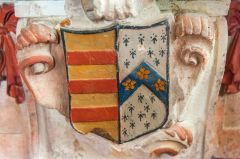 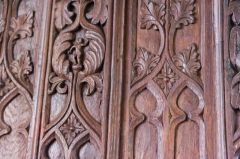