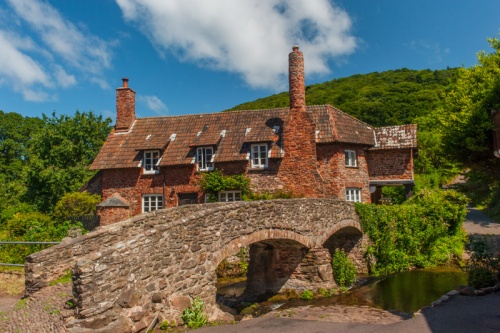 A small village just off the A39 in north Exmoor, Allerford's main claim to fame is the picturesque 15th-century packhorse bridge which spans the Aller Brook. This Grade II listed structure is supported on two segmented arches and has a width of just 4 feet.

The bridge is made of local red sandstone rubble and is supported on a central pillar in the centre of the stream. On the east side is a cutwater - a projecting wedge-shaped piece of stonework to help ease water flow through the arches.

The bridge surface is paved with cobbles, well-worn by the passage of feet for over 500 years. Though we don't know exactly when it was built, or by whom, it most likely dates to the latter half of the 15th century. You can walk across the bridge, and as you do you realize just how steep the span is!

Within the village, a short stroll west of the bridge, is the West Somerset Rural Life Museum and Victorian Schoolroom, an attractive thatched building that served as the village's school in the 19th century.

The museum covers the period from 1800-1950, with displays of traditional kitchen equipment, tools, amd agricultural gear. See personal items from lacework to jewellery used locally, plus outdoor equipment from animal and man traps to veterinary tools. Outside the museum are cider press and apple crushers, a shoemakers workshop, thatching equipment, and a blacksmithing display.

Within the village is Allerford House, where Admiral John Moresby grew up. Moresby (1830 – 1922) is famed for his explorations of the New Guinea coastline. Port Moresby, capital of Papua New Guinea, is named for him.

Between the museum and the packhorse bridge, almost opposite the visitor car park, is Allerford Forge, a working blacksmith forge making metal tools, equipment, gates, railings, sculpures, handrails, and signs. There is a small gallery area, and you can often see a smith at work in the main forge building.

There is a small car park and toilets for visitors. Allerford is contained within the National Trust's Holnicote Estate, which takes in over 12,000 acres of Exmoor coast and countryside. The village is signposted off the A39 3 miles west of Minehead.

I've been fortunate enough to visit Allerford several times. It really is one of the prettiest villages in Exmoor. The packhorse bridge leading over the Aller to a red stone building o the far bank is such an iconic view; one I could never tire of seeing.

The entire village is packed with attractive period houses, many built of the same red sandstone. The village is very well located for visiting the popular tourist areas of Selworthy and Porlock Weir, with very good access to eastern Exmoor. 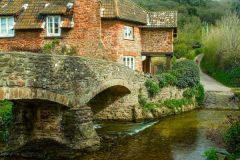 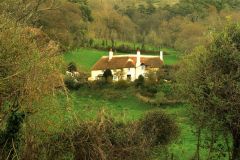 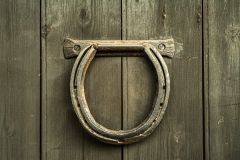 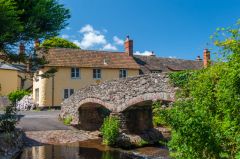 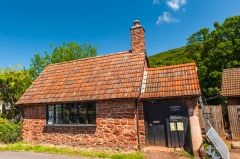 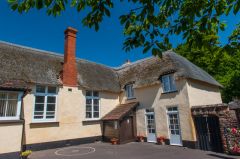 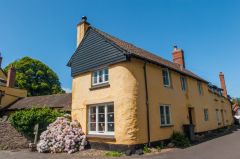 More self catering near Allerford

More bed and breakfasts near Allerford