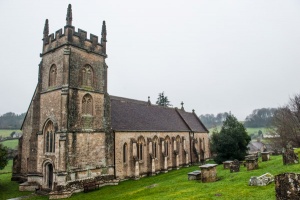 Horningsham church
The church of St John the Baptist was founded in 1154 by Sir Robert de Vernon on a sloping hillside. We don't know what the area of Horningsham looked like then, but today the church looks across glorious countryside to the stately home of Longleat House and park.

St John's was founded as a collegiate church, and Sir Humphrey de Bohun gave a house, land, and animals for a priest to serve the church. The earliest written record of the church comes in 1224. That first church was not officially dedicated and had no font for baptism. The churchyard was not enclosed, so animals wandered freely past the door.

By the time of a visitation in 1408, a font had been added, as had a graveyard and fence. However, the inspectors found the fence broken, and decreed that the parishioners must repair it or pay a fine. 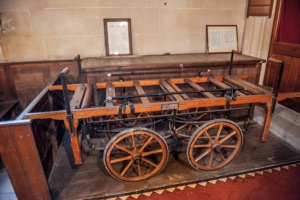 By the late 18th century, the church was in very poor repair and the south wall had to be completely rebuilt. The chancel and north aisle were rebuilt in 1810, with the cost born by Lord Bath. The entire church was expanded in 1843, and what we see today is largely the result of this early Victorian restoration.

The tower is 15th century, but almost the entire remainder of the church dates to the 1843 rebuilding. At the west end of the nave is a carved stone royal coat of arms. A few medieval tiles have been preserved in the presbytery, and some memorials from the earlier church have been preserved, including a 1727 tablet with an indecipherable inscription.

There is a very nice marble monument in classical style to Thomas Davis (1807) and another to William Crumbleholme (d. 1828).

The most striking feature is the timber roof of the chancel, which is decorated with extremely large wooden figures of angels projecting out over the centre. In fact I don't think I've eve seen such large carvings on any angel roof in Britain.

Horningsham's church is not replete with historical features, but it is an extremely good example of early Victorian taste, and the location is utterly wonderful, on a sloping hillside in glorious countryside.

The church was open we visited. 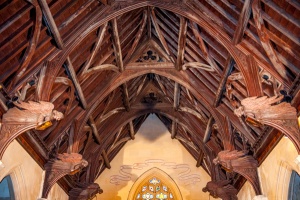 The angel roof of the chancel 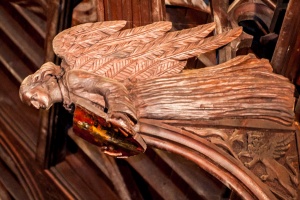 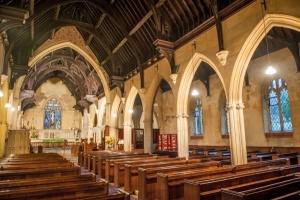 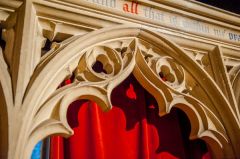 More self catering near Horningsham

More bed and breakfasts near Horningsham