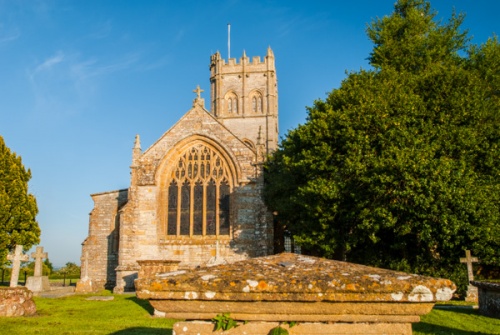 The impressive church of St Peter and St Paul stands beside the ruins of the 12th-century Benedictine abbey of Muchelney. The first church here in the 'great island' of Muchelney was built in the Saxon period, but most of the present building is 15th century.

From at least 1228 the vicar was appointed by the Abbot of Muchelney Abbey, and the abbey retained the living until the Dissolution of the Monasteries. The abbey was responsible for providing the vicar with bread and ale every day, plus meat twice a week, and eggs and fish the other five days.

The impressive three-stage tower is late 15th century and is adorned with grotesque carvings. The tower is noticeably more elaborate on the north face, away from the abbey. Presumably, the church builders felt no need to impress the monks, only those approaching the church from the other side! The vault supporting the tower is graced with wonderful Perpendicular fan vaulting. 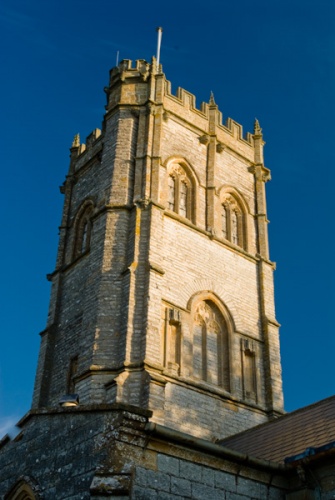 Set into the floor near the 15th-century octagonal font are 13th-century tiles in a variety of floral designs and there are more tiles in the chancel, where there is also a medieval triple-seat sedilia. The tiles were brought here from Muchelney Abbey in 1873. Both the chancel and nave have a simple wagon roof, and a 13th-century coffin slab has been used to form the north porch archway.

Mounted on a panelled arch in the south aisle is a pair of medieval wood carvings. There are fragments of late 15th-century glass in the east window and colourful 17th-century glass in the side chancel windows. The pulpit and lectern were made for the Lord Mayor's chapel in Bristol and date to 1830. They were given to the church by Sir Charles Wathen.

Though all these features are interesting, what makes Muchelney's parish church an absolute must-see is a fabulous 17th century painted ceiling extending the entire length of the nave. The painting is on wooden panels, each panel with a figure of an angel.

Some of the angels are bare-breasted, which makes you wonder how the ceiling escaped the attention of Puritan iconoclasts! The partially nude angels are thought to be a symbol of innocent purity.

The angels are set against a background of blue sky, with cherubs floating amid clouds. There are stars at each end and a large sun in the centre panel. The effect is simply staggering.

Over the south vestry is a barrel organ with colourfully painted pipes, installed around 1840. The organ has a built-in repertoire of three chants and 25 hymns.

Outside the east end of the church is the worn effigy of a medieval abbot, discovered during repairs to the abbey in 1873. Across the road is Priest's House, a 14th-century thatched house made by the monks of Muchelney Abbey for the parish priest. This is now owned by the National Trust and has regular open days.

I loved Muchelney; the combination of the 14th-century Priest's House, the scenic abbey ruins, and the fabulous church interior make it one of the most memorable villages I've ever visited in Somerset. The painted nave ceiling is one of the most astonishing sights you could ever hope to see in a simple country church. 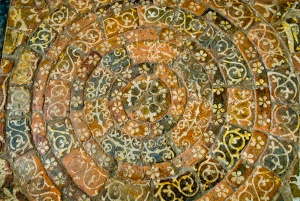 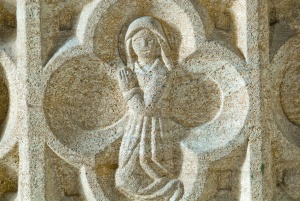 Carved figure on the 15th-century font 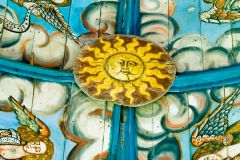 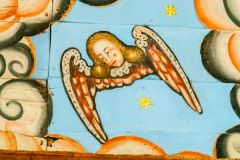 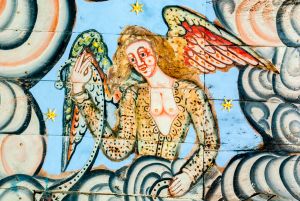 About Muchelney
Address: Muchelney, Somerset, England, TA10 0DQ
Attraction Type: Historic Church
Location: In the centre of Muchelney, beside the abbey and across the road from the Priest's House. Parking along the road. The church was open when we visited.
Website: Muchelney
Location map
OS: ST429249
Photo Credit: David Ross and Britain Express

More self catering near Muchelney

More bed and breakfasts near Muchelney