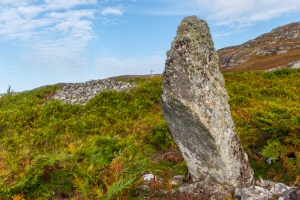 There are two Neolithic burial cairns at Coille na Borgie, at the northern end of the Strathnaver glen. When the cairns were opened around 1867 the remains of human bones were discovered, but no proper modern archaeological investigation has been done on either cairn.

Both cairns are elongated, or long cairns, with a horned forecourt area at one end. The semi-circular area formed by the curving 'horns' is thought to have been used for ritual observances, perhaps tied to the process of exhumation, where the corpse of a dead person was left outside to be stripped of flesh by animals, and only when the flesh was completely gone were the bones brought inside the burial chamber within the cairn.

The southern cairn has a row of upright stones, known as orthostats, which mark the shape of the horned forecourt. This arrangement of standing stones is thought to be unique in Scotland. Two of the standing stones are more prominent than the others, and a local tradition says that one marks the site of buried treasure, while the other conceals disease. You'd best be careful, then, which stone you dig up!

The southern cairn is the longest, stretching an impressive 240 feet. You can make out the inner burial chamber, divided into compartments by upright stones, and five stones marking the forecourt. The largest of these is roughly two metres high. The northern cairn is in much poorer condition and has only a single upright stone still standing. 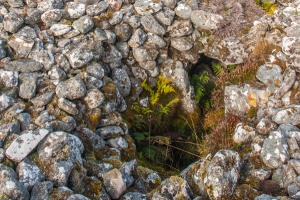 Burial chamber in the north cairn

There is a layby along the road to Skelpick, with a very clear signpost, and an information pane. An obvious trail leads up to the cairns. The exposed stones of the cairns make them easily visible, and it is quite easy to see how they were laid out.

What is really striking is the arrangement of orthostats, or standing stones, which really stand out and must have made an important 'statement' to a Neolithic inhabitant viewing the cairns.

This really is quite an impressive site, and being immediately beside the Skelpick road it is also one of the easiest cairns to visit in Sutherland. 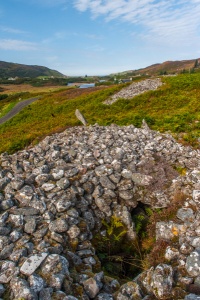 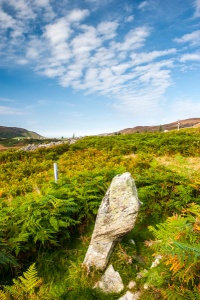 Nearby accommodation is calculated 'as the crow flies' from Coille na Borgie Chambered Cairns. 'Nearest' may involve a long drive up and down glens or, if you are near the coast, may include a ferry ride! Please check the property map to make sure the location is right for you.