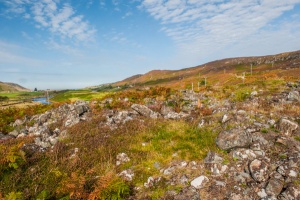 The ruins of Achcoillenaborgie Broch

At the northern end of Strathnaver Glen stands the ruins of an Iron Age broch. The name 'Achcoillenaborgie' gives a clue to the nature of the site, for 'borg' comes from the Old Norse for a fort.

There are a dozen or so known broch sites along the length of Strathnaver glen, and they were usually built within sight of each other. From Achcoillenaborgie the inhabitants would have been able to see at least 2 other brochs, at Sandy Dun and Apigill (now vanished).

The broch walls are 28 feet in diameter, and fully 14 feet thick, with a collapsed entrance on the north side. There are also obvious ruins of secondary buildings outside the broch walls.

You can make out traces of a chamber built into the thickness of the walls on the north side, while there is a circular enclosure a short distance to the south west. A shallow ditch and bank earthwork surrounds the site and may have acted as an outer line of defence. 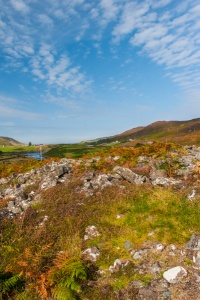 Another view of the
collapsed walls, looking north

Achcoillenaborgie has suffered from the passage of time; the walls are almost completely collapsed, and stone has been robbed for local building purposes. Yet enough remains to give a good idea of the layout of the broch.

First, you have to find it, though! Bracken grows up around the site and completely obscures the stonework in summer and early autumn. I walked completely around the broch without seeing it, and it was only when I decided to strike off the perimeter path and climb what appeared to be a small bracken-covered knoll that I realised I was climbing the brock itself!

Once you climb - carefully - onto the walls, you can easily make out the shape of the broch, and spy the ruins of chambers and secondary structures outside the walls.

The broch is very easy to access off the road from Bettyhill to Skelpick. There is a layby on the main road, with a clear signposted circular trail passing around the broch, and an information panel giving you a bit about the history of the broch and the Achcoillenaborgie area.

Achcoillenaborgie is part of the Strathnaver Trail, linking historic sites along the glen. Immediately to the south are Coile na Borgie Chambered Cairns, and a bit further on is Achanlochy Clearance Village. 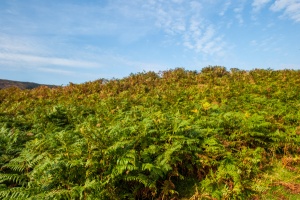 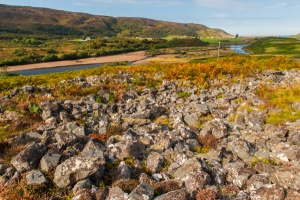 Atop the broch wall, looking north

Nearby accommodation is calculated 'as the crow flies' from Achcoillenaborgie Broch. 'Nearest' may involve a long drive up and down glens or, if you are near the coast, may include a ferry ride! Please check the property map to make sure the location is right for you.

More self catering near Achcoillenaborgie Broch