HERITAGE HIGHLIGHTS:   One of the last villages to be cleared on the Sutherland estates 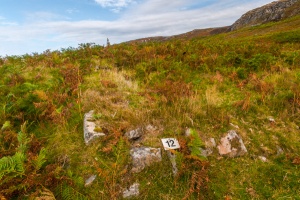 In the early 19th century a small community of crofting families lived on low ground beside Lochan Duinte, at the north end of Strathnaver. The Strathnaver region was part of the vast Sutherland Estates, and like so many crofting communities in the estate, it suffered from the Duke and Duchess of Sutherland's decision to clear existing farmers from the land in favour of more lucrative sheep.

Achanlochy was one of the last communities to suffer from the Clearances. The man responsible for the earlier clearances was the Sutherland's factor, Patrick Sellar.

Sellar had been forced to resign his post in part due to adverse publicity generated by his harsh methods of evicting families from crofting villages. But Sellar did not leave the region, instead, he became a sheep farmer himself. Sellar, and others like him, wanted even more land cleared for sheep. It fell to his successor, Francis Suther, to carry out the clearances.

Though it seems Suther was himself a generous man, he gave his constables free rein to enforce evictions of families from the glen. This including burning cottages so they could not be reused. Though the methods of the constables drew more adverse publicity, it did not stop the evictions.

In 1819 there were 7 families living at Achanlochy, sharing the fields in a communal system and growing oats and potatoes. They kept cattle, chickens, goats, and sheep, and fished from the nearby lochan.

Six of these families were resettled locally, using barren ground at Strathy, Aultiphurst, and Armadale. One family left for a better life in the south. As for the village, it was left to moulder into ruin, and now bracken covers the foundation walls of the houses, corn kilns, and barns.

Achanlochy is a lonely place, a feeling emphasized by the fact that so little of the foundations can be seen. It takes a keen eye to pick out the shape of buildings beneath the turf and bracken. For that reason, it is best to visit in spring before the bracken reaches its full height.

That said, you can make out quite a bit of the building remains. There are a pair of excellent information plaques with a layout of the major buildings and a history of the site. To the west of Achanlochy is a white house called Achaboorin, the home of the first sheepmaster to farm the area after the village was cleared.

Achanlochy forms part of the Strathnaver Trail, linking historic sites throughout the glen. Just north of the village is Coille na Borgie Chambered Cairns, and the Iron Age broch at Achcoillenaborgie. If you want to learn more about the Sutherland Clearances I can recommend Timespan in Helmsdale, and the Strathnaver Museum in Bettyhill; both are excellent local resources. 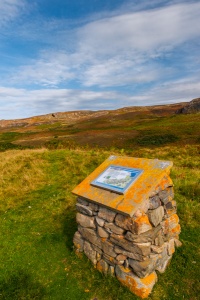 The village and
information panel 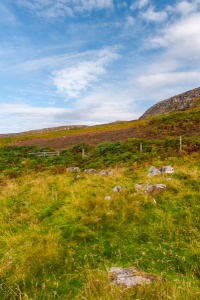 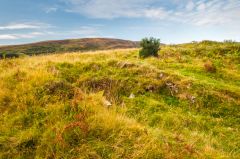 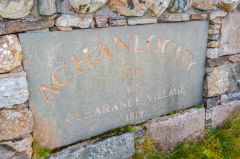 Nearby accommodation is calculated 'as the crow flies' from Achanlochy Clearance Village. 'Nearest' may involve a long drive up and down glens or, if you are near the coast, may include a ferry ride! Please check the property map to make sure the location is right for you.