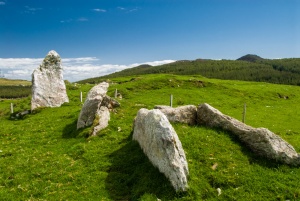 Just off the minor road leading from Port Ellen to the Oa Peninsula stands the remains of a Neolithic chambered cairn, erected between 3500-3000 BC. The cairn lies on the slope of Creag Mhor, a low hill to the south of the road. Much of the cairn has been destroyed by a track to the south that once led to a quarry.

The cairn is covered with turf and there is no obvious sign of material used to cover the tomb. The design is what is called by archaeologists a Clyde type, a style used throughout southwestern Scotland.

This type of cairn is roughly trapezoidal, with a semi-circular forecourt at one end, fronted by large stones called portal stones. It usually lacks a passage, and the galleried grave chamber is divided into separate compartments by vertical slabs. In the case of Cragabus the cairn was aligned on an east-west axis with the chamber at the east end.

About 3m (10 feet) east of the chambered cairn is a large standing stone, measuring about 1.8m / 7 feet high. Historical records show that the ground level has risen over the last two centuries, so the stone was probably mich taller, probably as much as 3.5m, or about 12 feet.

The Royal Commission on the Ancient and Historical Monuments of Scotland suggests that the standing stone was one of a pair of portal stones. That would suggest that the cairn stretched at least 26 feet long, and had 4-5 compartments.

Only one compartment has survived. It is just over 16 feet long, about 3.5 feet wide, and the same in depth. When the compartment was excavated a jumble of bones was found, grouped in the sides and corners of the cist.

The rest of the chamber was filled with stones. Archaeologists found pieces of beaker pottery, pebbles, and flint flakes. In the central section they found animal bones, including ox, sheep, and pig, with burnt bones and flakes of flint. The finds are now held by the National Museum Scotland.

The main chamber originally had transverse stone slabs, dividing it into at least three compartments. Two of these transverse slabs are missing, but two others remain, and stand to the full height of the chamber. Interestingly, two of the slabs overlap, but the other two simply butt against each other.

It is fascinating to see what is just part of a much larger chambered cairn and imagine how it would have looked when first built.

Parking is an issue for Cragabus. I managed to pull off the road a distance from the site and walked back to it, but just be aware that it can be a challenge. 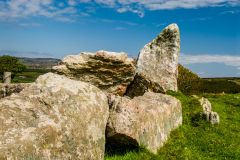 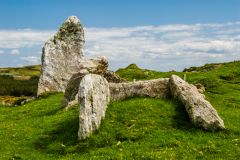 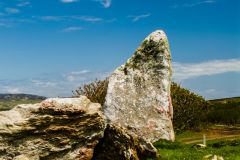 Nearby accommodation is calculated 'as the crow flies' from Cragabus Chambered Cairn. 'Nearest' may involve a long drive up and down glens or, if you are near the coast, may include a ferry ride! Please check the property map to make sure the location is right for you.