HERITAGE HIGHLIGHTS:   14th-century grave slab of a MacKay of the Rinns 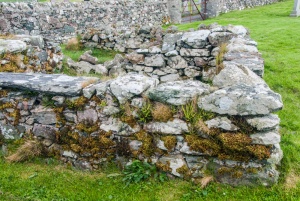 A section of foundation walls

The hamlet of Nearbus, or Nereabolls, stands on the eastern shore of the Rinns of Islay, in Kilchoman parish. On a flat terrace overlooking the shore stand the ruins of a late medieval chapel.

Nothing is known about the history of the chapel, but it is thought locally to have been dedicated to St Columba. It very probably dates to the 14th or 15th century, when Nerabus formed part of the territories of the Benedictine abbey at Derry in Ireland. The chapel was originally surrounded by 3 burial grounds, but all of these are now contained within the stone wall which encircles the chapel site.

Inside the chapel ruins are gathered together a collection of ancient grave slabs. Many of the slabs were discovered under a plot of turnips by a local farmer. The carved slabs have been cleaned and set on a gravel bed, covered by a protective glass cover to preserve them while allowing visitors to enjoy the ancient carvings.

Several of the slabs are carved with foliated crosses, in the style of the Iona School (14th-15th century). another bears a sword blade and a pair of strange beasts that resemble a gryphon and a lion.

Another slab shows a galley with sail furled, and pennons flying with a shield atop the stern. A small figure is shown climbing the rigging. Below the galley is a sword, with a lion and dragon figure fighting. Foliage issues from the dragon's tail and transforms into an interlace pattern at the base of the slab. At the base of the slab is a Latin inscription which translates as 'Here lies PTearlach...'. 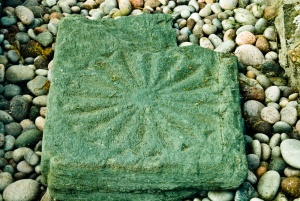 One of the most interesting carvings is a small section of a tapered slab carved with a circular pattern like a sunburst, with 16 radiating rays separated by grooves. According to the Royal Commission on the Ancient and Historic Monuments of Scotland (RCAHMS) this may be a marigold symbol. Such symbols are frequently found in Ireland and most often dated to the 7th century. To be honest I'd be very surprised if the carving was that old. It looks very much more like a late medieval carving.

Until recently a medieval carved cross stood beside the burial ground. The cross probably commemorated a MacKay of the Rinns. The MacKays were named hereditary officers of the Rinns by the MacDonald Lords of the Isles, whose administrative centre was at Finlaggan Castle.

Two sections of the cross are now on display in the Museum of Islay Life. A very worn inscription in Lombardic text probably translated as '[This is the cross] of Niall son of Aed'. Several of the MacKays of the Rinns had the name Aed.

Taken together the medieval slabs are a fascinating example of medieval workmanship, and it is so much more rewarding to see them displayed inside the medieval chapel than in a museum.

The chapel site was traditionally owned by Clan Donald, but is now in the care of the Finlaggan Trust. The chapel site is tucked away off the main road to Portnahaven, and doesn't seem to be mentioned in many guides to Islay. That's a shame, as I really enjoyed my visit, and found the collection of stones well worth investigating. 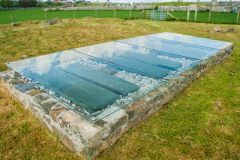 Nearby accommodation is calculated 'as the crow flies' from Nerabus Chapel and Carved Stones. 'Nearest' may involve a long drive up and down glens or, if you are near the coast, may include a ferry ride! Please check the property map to make sure the location is right for you.

More self catering near Nerabus Chapel and Carved Stones

More bed and breakfasts near Nerabus Chapel and Carved Stones