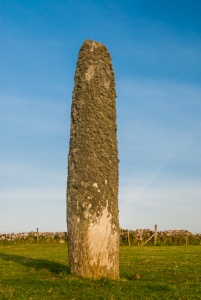 In a farm field near Kilbride farm, north of Port Ellen, stands a slender solitary stone. The stone is about 3m high (11'6") and has been shaped by carving into a tall, slender form. It is 0.8m broad and 0.3m thick (2'4" by 1') at the base. About four metres west is what seems to be a second stone, now fallen and partially buried. It is possible that the pair of stones were intended to mark an alignment with a celestial event.

The long axis of the standing stone is aligned ENE and WSW. The sides of the stone taper towards the top, which has been rounded off by carving. No one seems cettain when the stone was erected, but it must have been during the late Neolithic or Bronze Age, say roughly 3000-800 BC.

The chapel dedication suggests a very early foundation, but the building itself is probably late 17th century, built to replace the churches at Kildalton and Kilnaughton. An early Christian cross-marked slab known as 'Crois-an T-Sagairt' (The priest's cross') was found at the chapel. It is now in the National Museum Scotland. Near the chapel is a natural spring known as 'tobar an t-sagairt', or 'the priest's well'

The Kilbride stone has been suggested as a waymarker, or landmark beside an ancient trail.

It is very easy to find the stone. From the Port Ellen take the A846 east towards Lagavulin. Just as you leave Port Ellen a minor road branches off north to Kilbride. The road ends by Kilbride Farm after 1 mile, and the stone is easily visible in the field to the south east of the road.

Visiting the Kilbride standing stone can easily be combined with several other ancient sites in the Port Ellen area, including a stone at Creagan Nathrach to the south, and another stone immediately east of the road to Kilbridge here it leaves the A846. 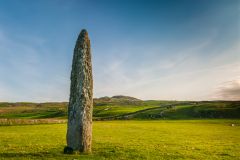 About Kilbride Standing Stone
Address: Port Ellen, Argyll and Bute, Scotland, PA42 7DS
Attraction Type: Prehistoric Site
Location: Take the minor road from Port Ellen to Kilbride, off the A846. The stone is immediately to the right of the road as you reach Kilbride Farm.
Location map
OS: NR385464
Photo Credit: David Ross and Britain Express

Nearby accommodation is calculated 'as the crow flies' from Kilbride Standing Stone. 'Nearest' may involve a long drive up and down glens or, if you are near the coast, may include a ferry ride! Please check the property map to make sure the location is right for you.