HERITAGE HIGHLIGHTS:   Scene of dramatic sieges in the 16th-17th centuries 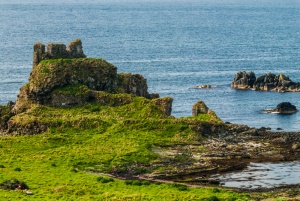 Dunyvaig Castle stands on a rocky promontory jutting into Lagavulin Bay, about 3 miles east of Port Ellen. The castle was built on the site of an earlier Iron Age fort, on a plug of rock. Over the centuries Dunyvaig was held by the MacDonalds, the Macleans, and the Campbells.

The first documentary evidence for the castle comes in the writings of chronicler John of Fordun in the late 14th century.

The castle ruins are a confusing jumble, half-hidden by foliage and seemingly fused to the rock of the promontory. The headland is small, encompassing an area of only about 200 square metres.

A section of a 13th-century tower still stands with a courtyard of the same period, with the crumbling walls of a 15th-century keep. Much of what remains dates from the 16th century and consists of an inner and outer court within a curtain wall, reached through a barbican. On the seaward side is a huge sea gate measuring 17 feet across. 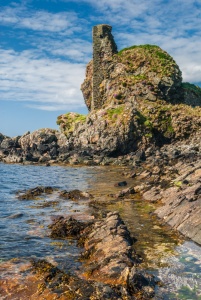 The castle from the shore

In 1493 James IV of Scotland broke the power of the Lords of the Isles and forced them to accept him as their overlord. Dunyvaig was forfeited to the crown, after which it was the subject of a tug of war between the MacDonalds and rival clans. The MacIans of Ardnamurchan took control, then the castle was leased back to the MacDonalds in 1519, then to the Campbells in 1543. Once again the MacDonalds took control in 1545, but James VI took the castle under royal control in 1596.

At least, that was the theory, but in practice, the leader of the MacDonalds, Angus MacDonald, 8th of Dunnyveg, refused to cooperate with the crown. In 1608 Angus MacDonald finally surrendered to a crown force led by Andrew Stuart, Lord Ochiltree. Stuart and Andrew Knox, Bishop of the Isles, were named constables. From 1610 the bishop was granted Dunyvaig as a life-rental if he supplied a garrison of 24 men under a captain.

Stuart left a garrison to hold the castle for the crown, but in 1614 the MacDonalds were back, led by Ranald Og Macdonald. Ranald was an adventurer, described as 'a vagabound fellow without ony certane residence'. However, he claimed to be an illegitimate son of Angus MacDonald, and gathered enough supporters that he was able to attack the castle.

Ranald and his men built ladders of from logs they gathered in a nearby wood, and scaled the outer castle wall. When the main gates opened Ranald and his men quickly overwhelmed the garrison and took control of the castle.

Ranald could not hold what he took, for shortly after he took control a new force of men under Angus Og MacDonald appeared. Ranald and his men held out for just six days before they fled in a small boat. 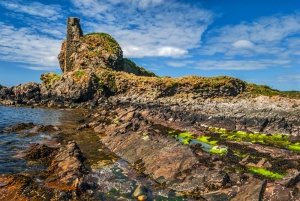 Dunyvaig from the east

The royal constable, Andrew Knox, tried to retake the castle but failed, and had to leave his son and nephew as hostages. In 1615 a new royal force led by Sir John Campbell of Calder battered the castle with cannon, and forced the garrison to surrender in 3 days.

A force of Covenanters under Sir David Leslie seized Dunyvaig in 1647, and Leslie had the MacDonald leader, Alasdair 'Old' Colkitto MacDonald, hanged from the castle walls. The castle was finally granted to Campbells of Cawdor, and served as the principle Campbell residence on Islay.

The Campbells held Dunyvaig until 1677, when Sir Hugh Campbell abandoned the castle for Islay House. Over the ensuing 300 years the ruins have crumbled away, leaving Dunyvaig a romantic ruin.

When I visited the castle site was fenced off due to danger from crumbling masonry, but you can still get incredible views of the castle from the rocky shore. East of the castle, hugging the shoreline, is Lagavulin Distillery, home to one of Islay's most popular whisky brands.

There are trails from the nearby road to the castle promontory, which is easily accessible at any time, but please do take care, for the cliffs are quite steep.

Dunyvaig is also known as Dunyveg Castle and as Dun Naomhaig in Gaelic. 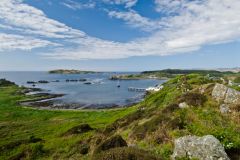 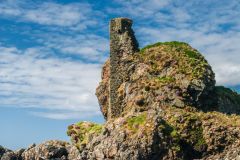 Nearby accommodation is calculated 'as the crow flies' from Dunyvaig Castle. 'Nearest' may involve a long drive up and down glens or, if you are near the coast, may include a ferry ride! Please check the property map to make sure the location is right for you.

More self catering near Dunyvaig Castle