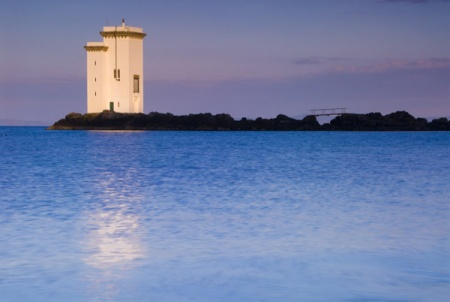 Travellers arriving in Islay on the Port Ellen ferry sail past a striking square lighthouse tower on a rocky headland to the south of Port Ellen harbour. The headland is known as Carraig Fhada, and the lighthouse tower was built in 1832 by the Laird of Islay, Walter Frederick Campbell in memory of his wife, Lady Ellinor (or Ellenor) Campbell, who died at the age of 36 in that same year of 1832. The building is sometimes called Port Ellen Lighthouse.

The unusual square design was by the David Hamilton & Son firm and may be the only square lighthouse in Scotland. The Hamilton firm also designed the memorial to Lady Ellenor in the Round Church in Bowmore. Walter Campbell built Port Ellen itself, which is also named in honour of his wife.

The unusual design is on an L-plan, three storeys high, with a main block 5.5m square and a 3.4m stair tower in the north-east angle. The stair is a stone turnpike design, ascending to a landing below the second floor.

From there a ladder gives access to a flat roof where a beacon and lens is mounted. In the east wall of the first-floor room is a large chimney piece in Gothic style. The lighthouse stands 17m (57 feet) high. There is no lantern, instead, a signal light shines from a mast on top of the tower. 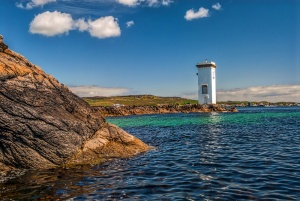 The lighthouse in midday light

The lighthouse was taken over by the Northern Lighthouse Board in 1924 and converted to operate on propane gas in 1963. The nearby keeper's cottage, no longer needed since the light was automated, is now a private residence.

Over the doorway is a lengthy inscription which reads,

"Ye who mid storms and tempests stray in
dangers midnight hour.
Behold where shines this friendly ray and
hail its guardian tower.

Tis but faint emblem of her light my fond
and faithful guide.
Whose sweet example meekin bright led
through this worlds eventful tide my happy course aright.

And still my guiding star she lives in realms
of bliss above.
Still to my heart blest influence gives and
prompts to deeds of love.

Tis she that bids me on the steep kindle this
beacons flame.
To light the wanderer o`er the deep who safe
shall bless her name.

So may sweet virtue lead your way that
when life`s voyage is o`er.
Secure like her with her you may attain the
heavenly shore."

A trail leads from the shore out onto the headland and directly to the base of the lighthouse. The path may be submerged at very high tides. The lighthouse is not usually open to visitors, but it is such an iconic local landmark that it really is a 'must see' for any visit to Islay.

I've visited at several times of day, but the most wonderful experience was coming at sunset, when the last light of the setting sun hit the whitewashed walls of the lighthouse, making them seem to gleam. It was such a stunning sight that I can't wait to go back again!

From the shore, a trail leads around the coast to a sheltered beach known as the Singing Sands, where the action of the waves at certain times shifts the sand in a way that produces an unusual sound, somewhat imaginatively labelled as 'singing'. 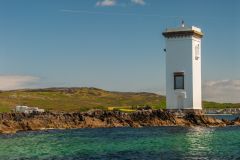 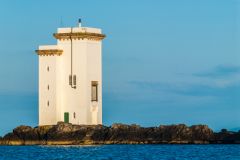 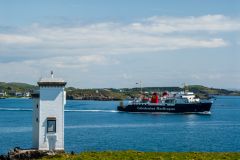 Nearby accommodation is calculated 'as the crow flies' from Carraig Fhada Lighthouse. 'Nearest' may involve a long drive up and down glens or, if you are near the coast, may include a ferry ride! Please check the property map to make sure the location is right for you.