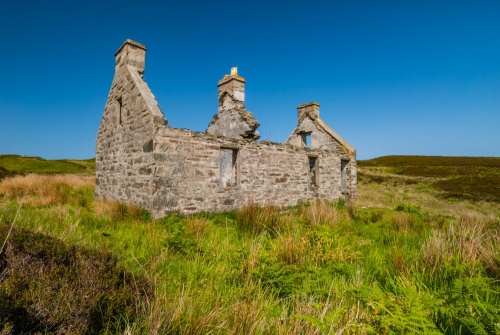 Scattered throughout the Highlands and Islands of Scotland are the remains of once-thriving rural settlements, most consisting of little more than roofless cottages or the remains of foundation walls half-obscured by the encroaching greenery.

Most of these deserted settlements are a reminder of the Highland Clearances, when crofters were forcibly removed from land their families had farmed for generations by heartless landlords who wanted to use the land for more profitable sheep or cattle farming.

But not all deserted villages are the result of the Clearances. One such village is Riasg Buidhe, in the northeastern corner of Colonsay. Here, half-hidden by bracken, stand the skeletal remains of cottages that once were home to a thriving fishing village and, long before that, an early Christian chapel and burial ground.

The Gaelic name Riasg Buidhe translates as ‘yellow moor grass’, though the colour -- and amount -- of grass depends on the time of year and what the weather has been like. When we visited, the cottages were enveloped in light green and brown bracken. 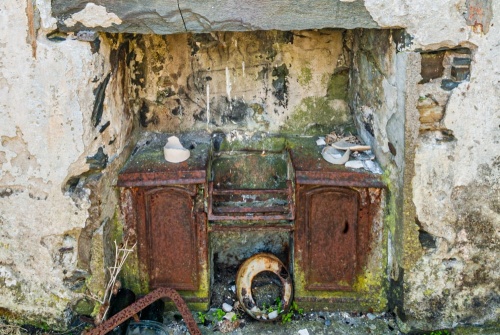 Remains of a cottage stove

From Farming to Fishing

The village community appears to have been centred around run-rig agriculture, a system of land tenure using open fields for farming. The land was divided into long strips known as rigs which were periodically reassigned to different tenants so that no one tenant always had the best land.

In the 19th century the local laird convinced the villagers to work as herring fishermen, supplying their catch to a curing station on Islay. Unfortunately, a storm caused the navigable approach to the curing station to silt up and, as a result, herring fishing was no longer viable. Many of the local men turned to lobster fishing, but even that wasn't enough to maintain the village. 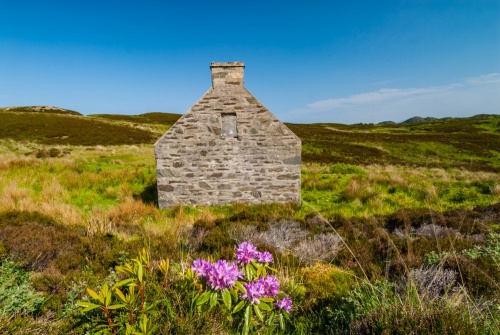 Nothing now remains of Riasg Buidhe. The last inhabitants left in 1918, after the local fishing industry collapsed, and many residents moved to nearby Glassard.

Riasg Buidhe is known as 'the fever village', which would suggest that it was deserted as a result of a fever outbreak. There was indeed at least one known outbreak of scarlet fever in the village, but the inhabitants left because Riasg Buidhe was no longer viable as a base for fishing, not because of disease. 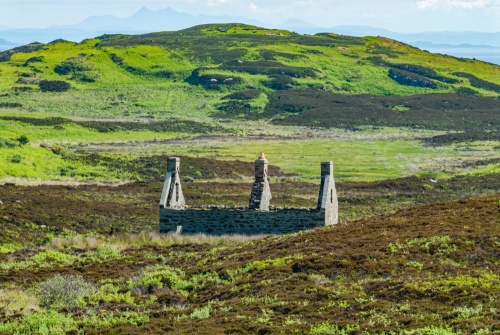 The former chapel has produced two archaeological finds of national significance; a cross slab carved with the outline of a Latin cross, now held at the National Museum in Edinburgh, and a cruciform slab known as the Tobar Oran Stone, or Riasg Buidhe Sculptured Stone, now in the gardens of Colonsay House.

The Tobar Oran stone is a peculiar 8th-century cruciform slab carved with a Latin cross, stylised human head, and phallic symbol. The carved head has been interpreted as representing a tonsured monk. The stone stands near the Tobar Oran holy well in the grounds of Colonsay House Gardens. The sculptured stone originally stood beside the village's well.

The settlement we see today consists of eight buildings, some retaining their fireplaces and chimneys. The earliest cottage appears to date to the 18th century, but there was almost certainly a settlement here for over 1,000 years.

The location, though remote and not that easy to find, is well worth seeking out. The setting is superb and is only 1.5km from the nearest road. 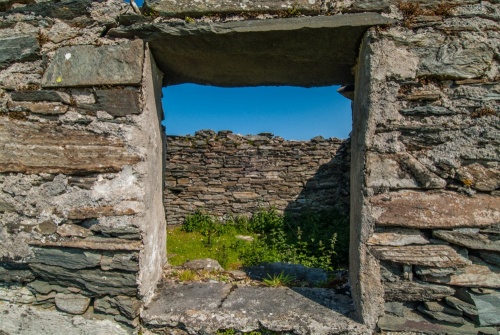 Looking through a cottage window

From Scalasaig take the B8087 north in the direction of Kiloran. You will pass Glassard before the road swings north and west. at grid reference NR394952 you come to a gravelled track on the right. There is room to park just off the track. This track winds in a more or less easterly direction for under one mile (1.5km) until you come to the ruins of Riasg Buihe, with views north to Eilean Olmsa.

Be aware that there is no signage at either end of the trail! We found it easy enough to find the start of the trail; we didn't see any other trail off to the east of the B8087.

Nearby accommodation is calculated 'as the crow flies' from Riasg Buidhe Fever Village. 'Nearest' may involve a long drive up and down glens or, if you are near the coast, may include a ferry ride! Please check the property map to make sure the location is right for you.