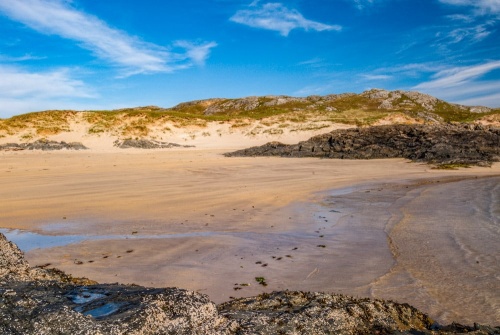 Though small, the Isle of Colonsay is blessed with some of the best beaches in Britain. The most popular beach on the island is Kiloran Bay, a beautiful stretch of pure white sand facing west towards the Atlantic, but if you are willing to stretch your legs and take the farm track past Kiloran Bay for three miles, through some of the most beautiful landscape in the Western Isles, you will reach the beach at Traigh Ban, near Balnahard, which is every bit as enjoyable a destination, and has the advantage of being more sheltered and peaceful than its more popular counterpart at Kiloran. 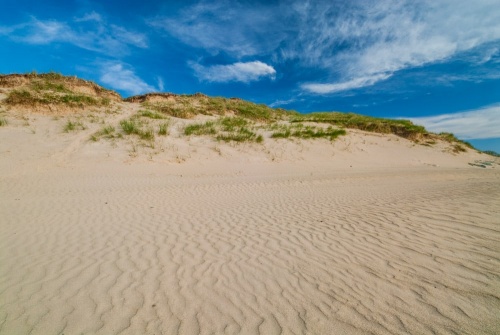 What makes Balnahard Bay so enjoyable is its remoteness. It takes roughly 45 minutes to reach the beach from the end of the road at Kiloran, or 20 minutes if you cycle. The bay faces east and north towards Mull and Jura, and is sheltered from the prevailing winds by a system of machair -- low, rolling sand dunes and grasses.

On a sunny day you will probably have the beach to yourself, something that can't always be said for Kiloran Bay, which has become a popular destination for surfers in recent years. 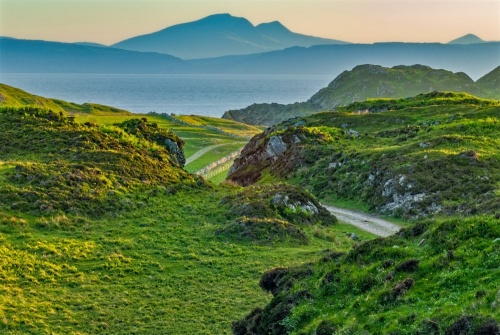 Getting to Balnahard Bay is straightforward. Start at the bend in the B8086 north of Kiloran, before you reach Kiloran Bay. Just past the bend, you will see a lay-by on the left and a farm drive on the right, signposted to Balnahard Farm.

Park on the wide grassy area just inside the farm gate, which has always been open when we visited. Take the farm track across the machair, heading in a northeasterly direction, with Kiloran Bay and beach visible past the machair to your left. 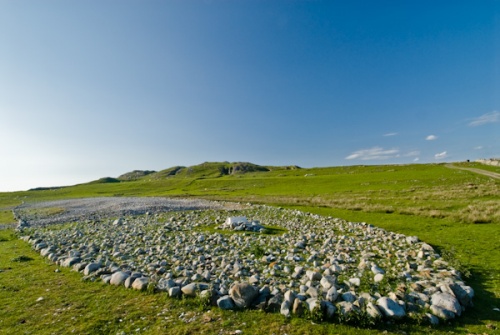 As you reach the end of the machair the track surface is paved with concrete. The track begins to wind up the slope of Carnan Eoin. Just before a cleft at the summit you can see St Columba's Well down the slope to your left. This ancient holy well is said to have been established by St Columba himself, which is entirely possible as Columba is known to have visited Colonsay. 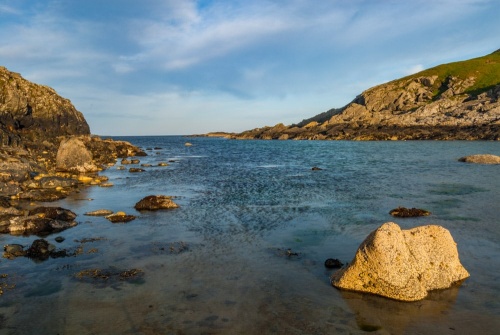 Over the summit of the Carnan Eoin pass the track begins to descend and you can see the small horseshoe-shaped bay of Port Sgribins to your left. Beyond the bay is the Colonsay Whale Sculpture, the huge outline of a whale created by thousands of white beach stones. 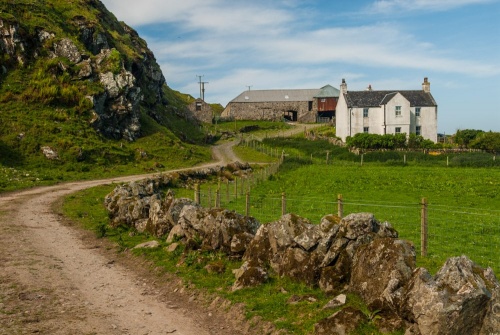 Past the whale sculpture the track makes a sharp right and crosses low-lying farm fields. Keep left where the track forks and you will pass close to Balnahard Farm. 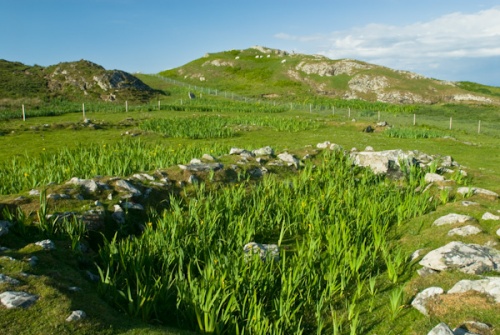 About 700m past the farm you will see the remains of Cill Chaitriona to your left. This is an early Christian chapel and burial ground, possibly founded by monks from Iona in the 7th century. Near the chapel ruin is Clach A'Pheanais (Balnahard) Standing Stone. The stone is known locally as The Stone of Penance, and there is a tradition that penitents were flagellated here after confessing their sins at the chapel. 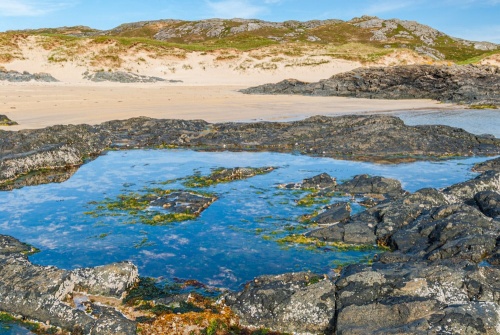 A rockpool at Balnahard Bay Beach

Beyond Cill Chaitriona the track ends at a farm shed. Carry straight on across the machair and you will reach Balnahard Bay at the beach of Traigh Ban. The bay here is more sheltered from the weather than Kiloran, and the views are stunning. Birdlife abounds, and we enjoyed photographing seabirds for hours and sinking our feet into the clean, white sand.

There are, unfortunately, no footpaths that link up with Balnahard Bay, so your return trip is back the way you came.

Nearby accommodation is calculated 'as the crow flies' from Balnahard Bay Beach (Traigh Ban). 'Nearest' may involve a long drive up and down glens or, if you are near the coast, may include a ferry ride! Please check the property map to make sure the location is right for you.