HERITAGE HIGHLIGHTS:   Stewart is the man responsible for our modern romantic view of the traditional Highlander 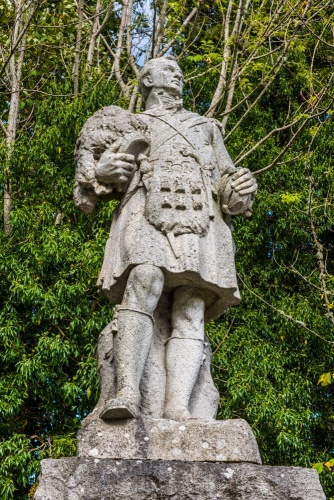 At the eastern end of Glen Lyon stands a memorial to a man who helped create the image what we think of today as the traditional Highlander.

Major General David Stewart was a descendant of Robert II of Scotland. He was born in 1772 at Garth Castle in Perthshire, and he died while serving as the governor on the island of St Lucia in the Caribbean. His sword and military decorations are in the National War Museum of Scotland at Edinburgh Castle.

Stewart had a long and distinguished military career as an officer in the Black Watch but he is best remembered as an antiquarian and the author of 'Sketches of the Character, Manners, and Present State of the Highlanders of Scotland', published in two volumes 1822.

'Sketches' is an in-depth look at the history of Scotland, its customs, culture, people, and military heritage. Most of the two volumes are concerned with the history of the Scottish regiments, following a request for historical background from the officer leading the 42nd (Royal Highland) Regiment of Foot, whose records had been lost. 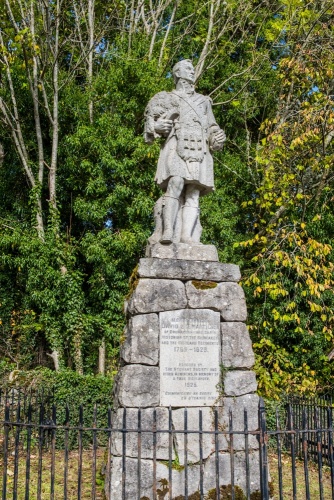 The memorial and base

Much more importantly, the two books were more responsible than any other source with creating our modern picture of the Scottish Highlander and the clan system. Stewart's detailed work is the foundation for all later studies of the Scottish clans and Highland heritage.

The books were universally acclaimed, even by critics who thought Stewart showed too much sympathy for the Jacobite cause.

Stewart joined novelist Sir Walter Scott in welcoming George IV on his ground-breaking tour to Scotland in 1822. Stewart helped Scott arrange a reception for the king in Edinburgh and led the Celtic Club in a procession.

He was made a Fellow of the Royal Society of Edinburgh in 1819 and served as a Companion of the Order of the Bath.

Stewart's birthplace of Garth Castle is about one mile north along the Keltneyburn road from the memorial. After years as a ruin, it has now been restored. The castle is in private hands and is not open to the public. 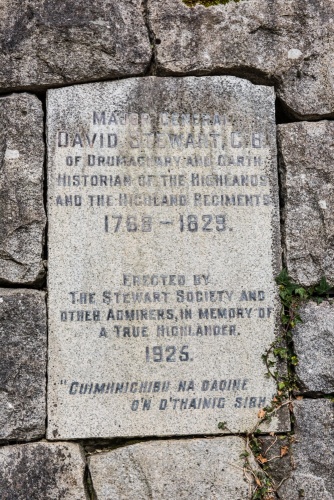 The memorial was paid for by the Stewart Society in 1919 and exhibited at The Exhibition of the Royal Scottish Academy of Painting, Sculpture and Architecture in that year. It was erected at Keltneyburn and unveiled in a public ceremony on 27 June 1925 by the Duke of Atholl, the Lord-Lieutenant of Perthshire. It shows Stewart in the costume of a captain in the Black Watch.

The sculpture was designed by Henry Snell Gamley, RSA, and executed by Stewart and Company of Aberdeen and Dumfries. It is made of granite from Creetown, near Newton Stewart in Dumfries-shire.

The base of the memorial is inscribed with the following text:

Major General
David Stewart, C.B.
of Drumachary and Garth
Historian of the Highlands
and the Highland Regiments
1768 - 1829.
erected by
The Stewart Society and
other admirers, in memory of
a true Highlander.
1925.
CUIMHNICHIBH NA DAOINE
O'N D'THAINIG SIBH.

The memorial stands at the bend in the minor road leading off the B846 at Coshieville, signposted to Fortingall and Glen Lyon. It is extremely easy to find, but much easier to spot while travelling east, toward Coshieville, rather than west towards Fortingall.

It is on the west bank of Keltney Burn, just over the road bridge and set back slightly at the apex of the curve. There is space for several cars to pull off the road opposite the memorial, though no dedicated parking area.

The first time we saw the Stewart Memorial we were driving west to visit the ancient yew tree in Fortingall a few miles to the west. I remember thinking as we came around the corner in Keltneyburn and spotted the striking statue of a man in Highland dress, 'what's that?'. I vowed to return and find out after visiting Fortingall.

What is so memorable about the Stewart Memorial is not the statue, though it certainly is striking, but the story of the man behind it. It is fascinating to think that so much of what we consider the prototypical Highlander is down to one man's research and writing. If it were not for Stewart, how much would we know about Highland customs and the clan system?

Stewart's 'Sketches' has been reprinted and digitised, and is still an invaluable historical resource today.