HERITAGE HIGHLIGHTS:   One of the easiest cup-marked stones to access in Perthshire 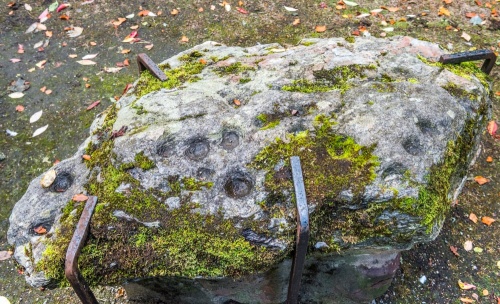 Immediately beside the entrance to the Birks of Aberfeldy car parks on Crieff Road in Aberfeldy is a large stone set on a stone plinth. The stone is covered with 22 cup marks, probably carved between 3,000 and 5,000 years ago.

Historians are unsure of what these cup-marks mean, but one theory is that they were a form of boundary marker between different tribes. Another theory suggests that they were an early form of a map. Such stones are usually found in areas with wide-ranging views.

The area around Strathtay and Loch Tay has a large concentration of similar stones. The information panel beside the stone has a map showing the location of numerous similar stones on high ground on both sides of the River Tay and the loch.

The Moness Cup-Marked stone was discovered in 1964 about 250m from its current site, in a field known as the Croft of the Church. It was moved in 2005 to its current location on Crieff Road to protect it from damage during the building of the Moness Heights housing estate. 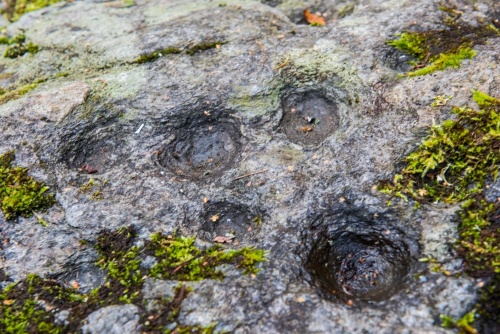 A closer look at the cup-marks

When it was moved a 20th-century brick was found beneath it, clear evidence that the stone was not in its original position. It may have been moved to provide a garden feature for Moness House.

The stone measures 0.9m x 0.6m (35.4" x 23.6") and you can very easily make out the deep cup-marks along its surface. The marks seem to be clustered in groups, but whether this is significant is anyone's guess.

It is extremely easy to find the Moness Cup-Marked Stone, though it is not signposted. The stone is on the grass verge of Crieff Road (the A826) between the Breadalbane Stag sculpture and the entrance to the Birks of Aberfeldy car park. It is very easy to reach on foot from the centre of Aberfeldy. There is an information panel immediately beside the stone.