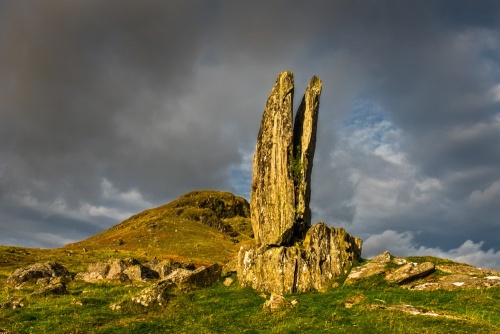 Sir Walter Scott once described Glen Lyon as the 'longest, loneliest and loveliest glen in Scotland'. He was right. Glen Lyon is arguably the longest glen in Scotland (it depends how you define a glen's territory). It is certainly the longest enclosed glen, extending over 25 miles from Fortingall in the east to the eastern end of Loch Lyon in the west. A single-track road runs down the glen, passing through incredibly beautiful countryside.

Near the hamlet of Camusvrachan is a cluster of old stone cottages at Balmenoch. If you follow a rough track up Gleinn Da-Eigg from Balmenoch, beside Allt a' Chobhair, you will eventually come, huffing and puffing from your exertion, to a striking rock formation resembling a pair of hands in an attitude of prayer, perched on a hill about 600m up from the glen floor.

This is the Praying Hands of Mary, or more commonly just 'The Praying Hands'. It is also known as Fionn's Rock as it was said to have been split in two by an arrow fired by the legendary Celtic hero Fingal, or Fionn mac Cumhaill (Finn McCool).

In 2000 the rock was featured in an art-landscape installation called The Path, linking natural landscape features in Glen Lyon with modern art. 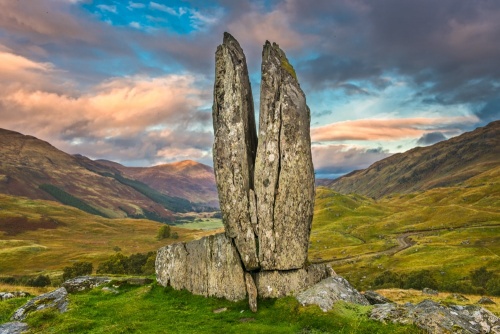 You can reach the Praying Hands from either Bridge of Balgie to the west or from Camusvrachan to the east. The latter is far shorter and makes a lovely walk in its own right.

The route starts at the bridge in Camasvrachan, 9 miles west of Fortingall. There are two large laybys near the bridge. You have to park as no cars are allowed to cross the bridge. Be sure to pull completely off the road as it is used by logging trucks. 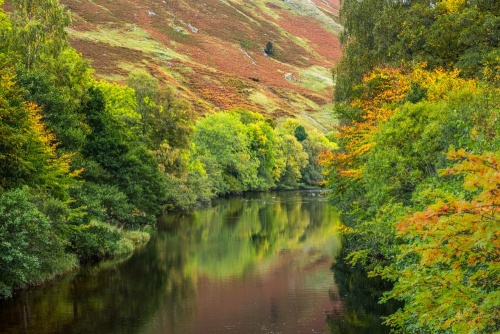 The River Lyon at Camusvrachan

Cross the bridge on foot and follow the paved road as it winds around a small hill. The route levels out and you come to a cattle grid where the pavement ends. Turn right, following the signposted route towards Balmenoch and Bridge of Balgie. You follow this unpaved road straight ahead, past a lovely pond on your left until you come to a pretty whitewashed cottage on your right. 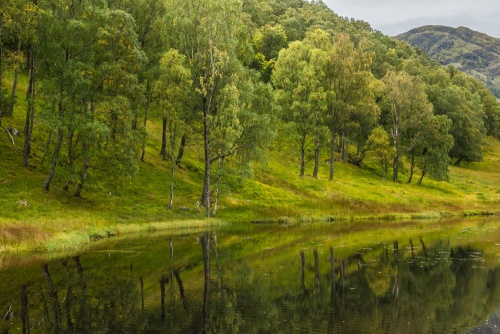 The route passes a lovely pond

Just past the cottage is another cattle grid and beyond that a cluster of attractive stone cottages.

Immediately opposite the cottages, a steep track heads uphill into Gleinn Da-Eigg. The route is not signposted but it is very obvious. 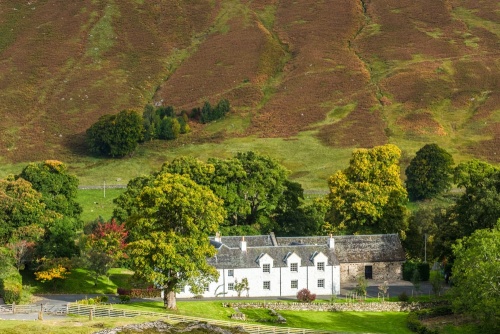 Simply follow the track as it winds uphill, with the small burn on your left. The going can be muddy here so good waterproof footwear is essential. You will pass through a farm fence - be sure to latch the gate securely - and eventually come to the ruins of a small farm building on your right. Just past this ruin you will start to see the tips of the two Praying Hands on a slope to the right of the path, looking like the tips of rabbit ears. 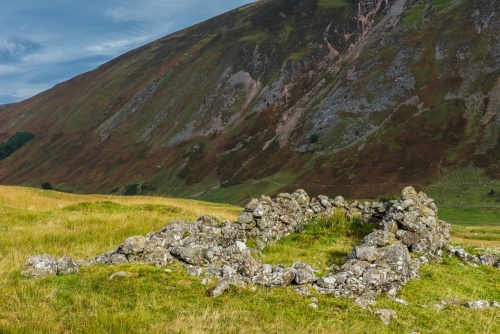 Just keep following the track as it winds steeply uphill and you will see the rock formation very clearly on your right. It really is impossible to miss. There is no direct trail to the Praying Hands but you can see where previous visitors have worn a rough route in and around boulders on the hillside up to the rock formation.

I've taken the walk from Camusvrachan to the Praying Hands several times. It should take a reasonably fit person between 35-45 minutes, depending on how often you stop. It is slightly shorter to return as you are going downhill for the first section.

The going is easy from Camusvrachan to Balmenoch but the last section uphill into Glen Da-Eigg is quite steep.

The scenery is simply stunning, and avid photographers like me will be in heaven. For taking photos I think late afternoon or evening on a sunny day is best, as the light floods east down Glen Lyon. Do be aware that the Praying Hands stand directly in the shadow of Creag nan Eildeag, which blocks the sunlight from hitting the rock at some times of the year.