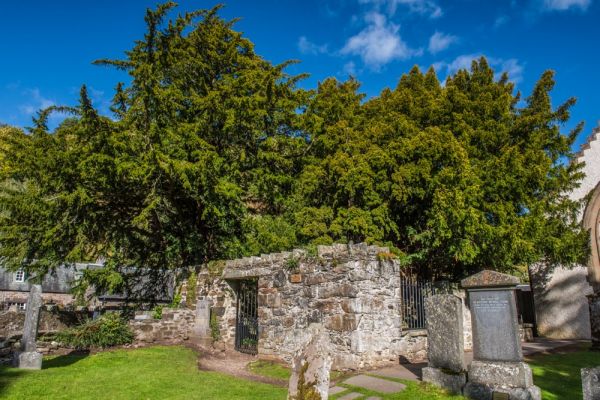 In a corner of a remote Scottish churchyard at the eastern entrance to Glen Lyon stands a yew tree once called the oldest living thing in the world. The Fortingall Yew is commonly held to be about 5,000 years old and stands beside the 18th-century church in this attractive heritage village.

The Fortingall Yew became such a popular visitor attraction in the 18th century that visitors began carving pieces of the tree to take away as souvenirs. Their careless enthusiasm threatened to kill the tree, so a high stone wall was erected around the tree, allowing you to see clearly see the yew from a safe distance without harming it.

The yew has numerous trunks, but even so, it is quite a bit smaller in circumference than it was before it suffered the attentions of souvenir seekers. A series of posts are set into the ground within the stone-walled enclosure, showing the astonishing tree's original girth. 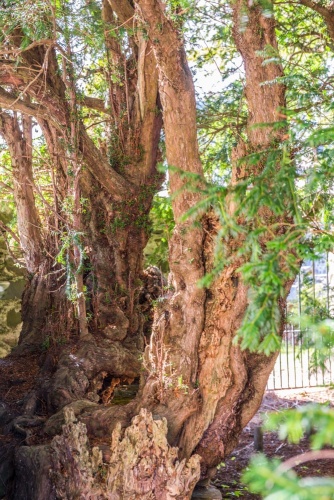 A closer look inside the yew tree enclosure

How Old is the Fortingall Yew?

The short answer is that we really don't know. The age of most trees can be determined by counting their annual growth rings, but the outer growth rings of yews rot away. Their growth rate is also very inconsistent, making their age notoriously difficult to estimate.

Visit Scotland, the official tourism body for Scotland, rather broadly puts its age at between 3,000 and 9,000 years old. The most frequently quoted figure is 5,000 years old. That figure was first suggested in 1769 when the tree's girth was measured at 52 feet (almost 16m). More recent estimates opt for a more conservative date of between 2,000 to 3,000 years old.

Even if the most conservative date is correct that still makes the yew at least 2,000 years old, meaning that it was in existence long before the church. Yew trees were often venerated in Celtic culture and were linked to a belief in the afterlife and resurrection. Early Christians frequently built churches beside yew trees, taking advantage of the fact that the site was already sacred.

So, is the Fortingall Yew the oldest living thing in the world?

No, not even close. The oldest known living organism (as of this writing) is an area of seagrass in the Mediterranean that has been dated to 200,000 years old. 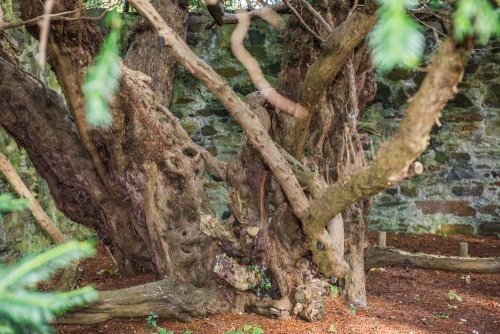 One of the yew's multiple trunks

Is it the oldest tree in the world?

No, that honour goes to a cluster of aspen trees in Utah, USA, thought to be some 80,000 years old.

Well, then, is it the oldest living thing in Europe?

Unfortunately, no. That honour goes to a bristlecone pine tree in Sweden estimated at 8,000 years old.

Well surely it is the oldest living thing in the United Kingdom?

Er, no. A yew at Defynnog in Brecknockshire, Wales is thought to be 5,000 years old.

It certainly is ancient, though, and the fact that it has survived at all, given the attentions of unscrupulous 18th-century tourists, is remarkable. 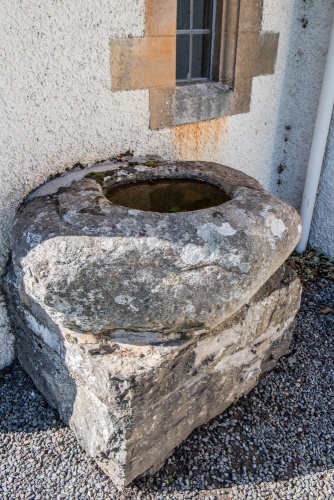 7th-century font bowl outside the church

A local legend says that the Roman prefect of Judaea, Pontius Pilate (died c. 39 AD) was born under the Fortingall Yew tree. Another version says that he was born in the village and played under the yew as a child.

Though at first glance this theory sounds farfetched, it is not impossible. The story goes that a Roman delegation arrived in what is now Scotland to negotiate diplomatic ties with Celtic leaders. One of those leaders was Metallanus, whose seat of power was Dun Geal in Glen Lyon. One of the Roman visitors fathered a child with a local woman and that child was Pontius Pilate.

An alternate version of the story says that Pilate's father was a member of the Roman delegation and he received word of his son's birth back home in Italy while he was visiting Metallanus.

Is there any truth to the stories?

The best we can say is that it may not be completely impossible. We do know that the Romans had some basic knowledge of Scottish geography and Roman pottery has been found on Orkney, so there was contact between the Romans and the Celtic inhabitants. However, there are no records of diplomatic visits. The successful invasion of Britain did not take place until 43 AD, and Pilate died around 39 AD, so the dates just don't fit. 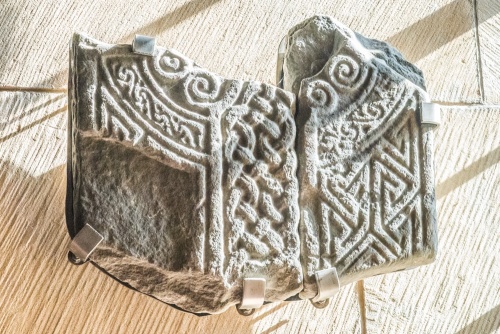 How did it get here?

This might seem like an odd question at first, but it is worth asking. How did the Fortingall Yew get here, in this remote Perthshire glen? Yews are native to the British Isle but are much more common in England and Wales. It would be unusual, though not impossible, to find a yew tree in the wild in Scotland. That suggests that the Fortingall Yew was planted intentionally.

Think about that for a moment. It means that over 2,000 years ago - and possibly long before that - someone intentionally planted a yew seed in Fortingall, and very probably nourished it and cared for the seedling, making sure it thrived, which of course might help explain how it managed to survive for so long.

Beside the yew, and sheltered by its overhanging branches, is the grave of Rev Duncan Macara, who served as vicar of Fortingall for 50 years, from 1754-1804. Re Macara founded the first two schools in Glenlyon and two more schools in Rannoch. His written account of social conditions in the late 18th century provides historians with a compelling glimpse of life in the Perthshire Highlands.

In 2015 the yew was in the news when scientists from the Royal Botanic Garden in Edinburgh discovered berries growing on one of its upper branches. Berries are only grown by female trees, but the lower parts of the tree are quite clearly male. This led the scientists to speculate that the Fortingall Yew was changing sex from male to female.

In the farm field south-west of the church is a cairn known as the Cairn of the Dead. This marks the burial place of villagers who died in the 16th century Great Plague (Galar Mhor). According to a local legend, so many villagers died that there was no more space in the churchyard to hold their bodies. One old woman was healthy enough to cart the dead in a cart to the field and dump them into a mass grave. She then erected the cairn we see today to mark the spot. 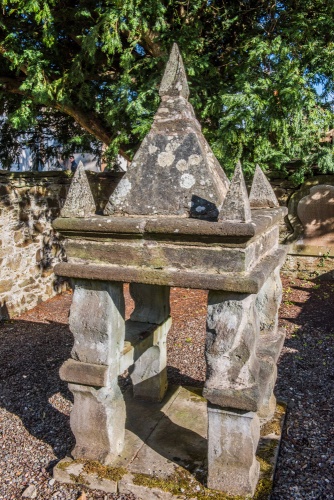 Long after the yew was planted, the first Christian church was erected here at the eastern entrance to Glen Lyon. We know that there was a Celtic monastery here, possibly established by Adomnan, Abbot of Iona from AD 679-704.

There is no obvious trace of that early Celtic monastery to be seen but for many years an ancient hand bell dating to the late 7th century was preserved inside the church. Unfortunately, the bell was stolen from its niche in the church in 2017 and as of this writing its whereabouts are still unknown.

In the churchyard are several very simple carved stone slabs decorated with incised crosses. One is thought to be 7th century. Outside the porch is a worn stone font bowl from around the turn of the 8th century. This was moved outside when a new font in Arts and Crafts style was installed in 1901.

At the east end of the church interior are three fragments of Pictish cross-slabs dating to around 800 AD. Though small, the carved fragments are extremely well-preserved and probably date to the 7th-century monastery.

We do not know when the monastery was abandoned but sometime in the 10th century it seems that the wooden monastic church was replaced with a stone church acting as the parish church. This stone church was in use until after the Reformation, when the Fortingall parish was one of the largest in Britain. In 1768 a belfry was added, and the carved stone peak of the belfry is now preserved in a corner of the churchyard. 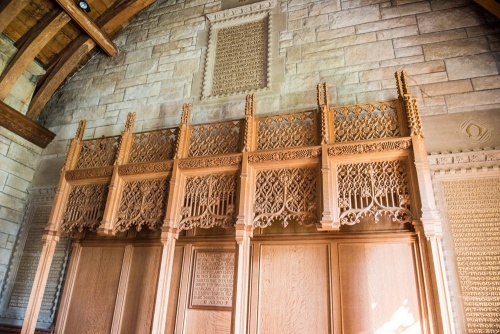 In 1895 the old kirk was replaced with the present harled building, designed by architects William Dunn and Robert Watson for Sir Donald Currie. This late Victorian building is a very simple rectangle with crowstepped gables and a small bellcote.

At the east end, behind the altar, is a beautiful oak screen designed by the famous Scottish architect Sir Robert Lorimer. This is flanked by stone tablets inscribed with the Lord's Prayer and the Ten Commandments, installed in 1913 as a memorial to Sir Donald Currie by his daughters.

On a window ledge on the north side of the nave is a bell cast for the old kirk in 1765 by Johannes Sprecht of Rotterdam. It was hung inside the stone bellcote now on display in the churchyard.

The church interior is a delight. It is simple, especially by Victorian standards, but everything is of the highest quality workmanship.

UPDATE
A disturbing report by scientists monitoring the health of the Fortingall Yew Tree claims that the tree is in danger of dying due to tourists tearing off branches as souvenirs. Visitors have been removing twigs and branches, and climbing over the protective barrier to tie ribbons and beads to the tree. Their actions have weakened the tree and left it in increasingly poor condition. Please, if you visit Fortingall, have some respect for this ancient tree and admire it from behind the protective barrier!

Fortingall is about 8 miles west of Aberfeldy, at the eastern end of Glen Lyon. The Fortingall Yew is very well signposted from surrounding roads. It is easily reached via the B846 at Coshieville from Aberfeldy, or off the A827 from Kenmore or Killin. Just look for the very obvious brown tourist signs labelled Fortingall Yew.

There is a small car park outside the churchyard, just beside the Fortingall Hotel. The yew is within a stone wall enclosure by the west end of the church, reached by a path made with carved flagstones depicting a timeline of events over the tree's incredibly long lifetime. 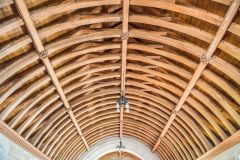